Cardiff students react to the Police, Crime and Sentencing Bill

The UK government introduced the Police, Crime, Sentencing and Courts Bill 2021 this month, after claiming Black Lives Matter and sexual assault protests got out of hand. The draft law proposes major changes to criminal justice legislations in England and Wales, particularly the ones concerning the police force, court processes, and sentencing for serious crimes. It also covers changes to protest rights by strengthening police powers to tackle protests that have a disruptive effect on the public, or on access to Parliament.

According to the policy paper, the bill aims to:

• Back police by equipping officers with the powers and resources to keep everyone safe.

• Improve the efficiency of the court and tribunal system by modernising existing court processes.

We reached out to Cardiff’s students to find out what they think of this bill and here’s what they said.

91 per cent, or 707 of the 781 respondents said that they disagreed with the bill. We asked students if they thought the bill was too extreme, if they understood its place, were going to protest anyway, or thought that protests should have always been banned. A staggering 67 per cent of respondents justified their disagreement by claiming that ‘the bill is too extreme’.

On the other hand, 18 per cent (177 people) said they can understand why the bill is in place while 11 per cent (110 people) said that they are going to protest anyway. Only four per cent (41 people) responded that ‘protests should always have been banned’, suggesting Cardiff students’ overarching lack of support for this bill. 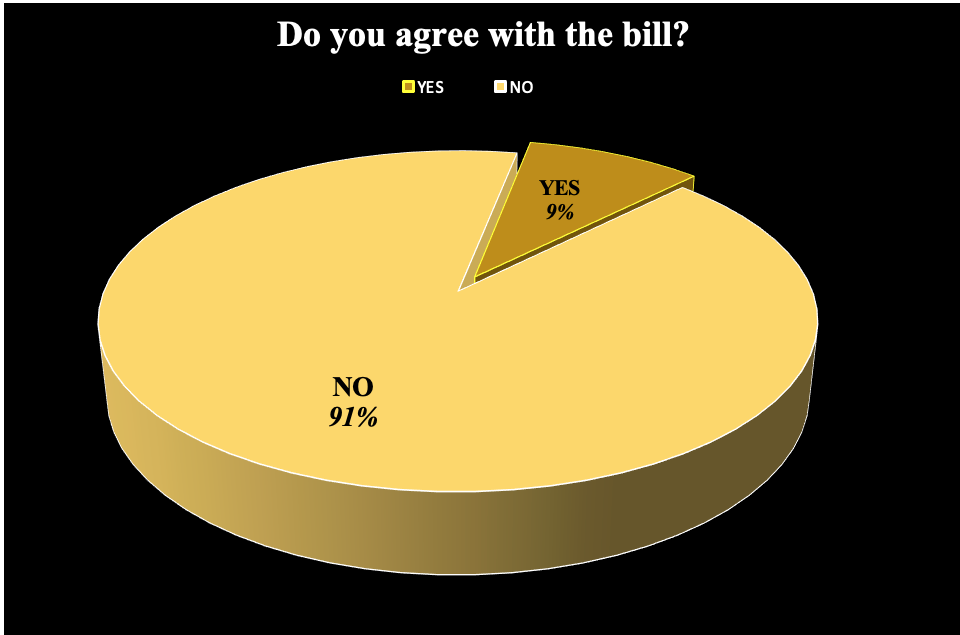 The Cardiff Tab spoke to one student, who explained, “as a foreign national, this bill makes my situation even more precarious- the fear of attending a protest and getting arrested followed by getting deported and blacklisted is even stronger now.” This shows that many students at Cardiff have lots to lose by attending protests, and this bill has made exercising democratic rights a much scarier process for many. 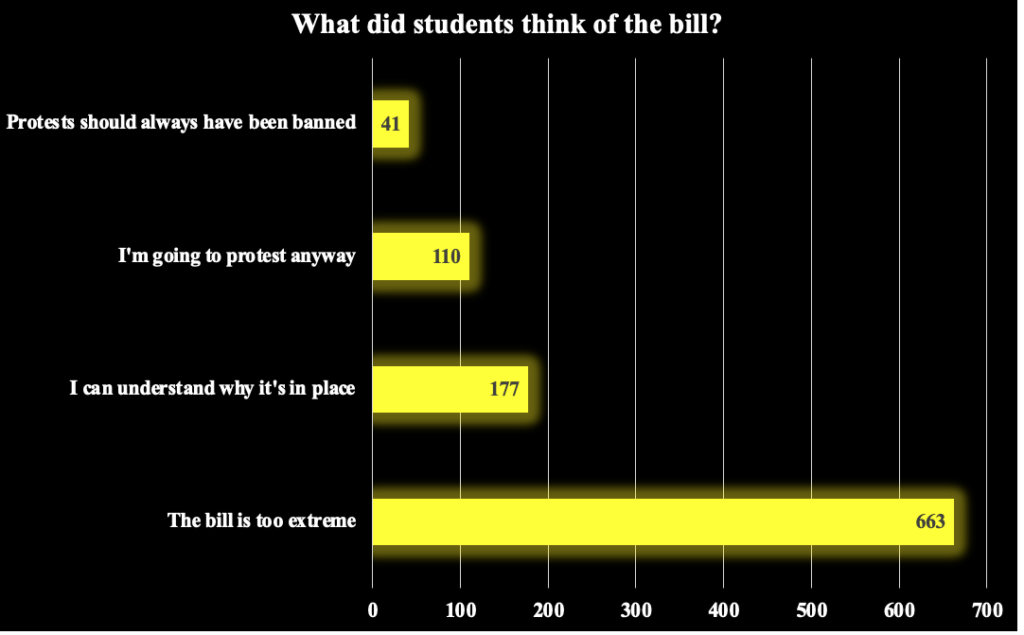 Students agreed the bill infringes on our democratic rights

When we asked students whether they thought the bill infringed on their democratic rights, 88 per cent (735 people) of the 838 respondents agreed. Furthermore, 57 per cent said that they would attend a ‘Kill the Bill’ protest/event in the future. This shows that Cardiff students want control over their democratic rights and are willing to protest to regain this autonomy, despite its illegality. 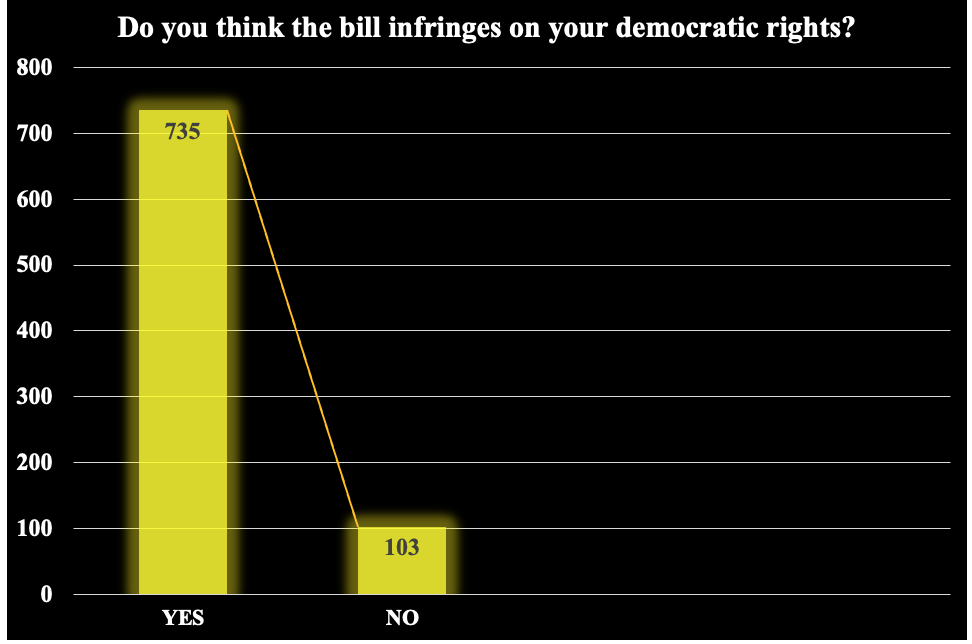 The Cardiff Tab spoke to one student who explained, “By staging a violent protest to protest against the bill proves why the bill is introduced in the first place.”

For 65 per cent of the students who responded to the poll, this bill will not affect their participation in future protests. Although, nearly 35 per cent of the respondents agreed that the bill was likely to change the way they participate and even whether they attend protests in the future.

Cardiff students have been active in protests over the years

The students of Cardiff have fought for the rights of themselves and others across the years. From protests against higher education tuition fees in 2010, to the demonstrations against the anti-abortion protests in 2020, we’ve made our opinions known. This year alone, we’ve seen students participating in protests, vigils and demonstrations for sexual assault, tuition fees, police brutality and strike actions.

Several people have taken to the streets to join the ‘Kill the Bill’ protests and demonstrate their disagreement and anger towards the Police, Crime, Sentencing and Courts Bill 2021. You can read more about the proposed draft of the bill here.

• Everything you need to know about Cardiff’s ‘Lockdown Olympics 2021’

• Cardiff University advises students not to travel for Easter

They walked students home after a ‘National Rape Day’ hoax

Meet us by the Woody?

Cardiff University urges anyone with information to come forward

Cardiff University lecturer suspended after allegedly having sex with students

The lecturer denies all the allegations, claiming he has been falsely accused

Only 12 per cent of students felt supported by their university

82 per cent of us still prefer old-school dating, but what can you do in a pandemic?

‘The show must go on’: Meet the Cardiff student actors who are moving their plays online

Tickets cost £2 and performances are raising money for local charities.

Mass crowd gathered outside the Welsh Senedd in Cardiff Bay

The crowd was heard chanting ‘open the pubs’

Here are the Welsh Easter traditions you need to know about

‘egg clapping’ is a thing apparently

Cardiff Council have called it ‘unacceptable’

Cardiff SU announces 12am curfew for club nights after lockdown

The announced has caused backlash from students

Missiles were thrown at the officers

Walks are the new night out

Cardiff students react to the Police, Crime and Sentencing Bill

I’m longing for an SU Wednesday

And it’s just as creepy as the last

Exclusive: Unis could finally be forced to have a legal duty for student mental health

There has been a ‘fundamental failing of care’ from universities towards their students, says the Conservative introducing the bill

Ethereum: What is it, how do I buy it and will Ethereum make me rich?

One ETH is currently worth around £2500

20 years on how well do you remember Legally Blonde? Take our trivia quiz to find out

Finally a quiz I’ll get full marks on

What is the Harry Styles My Policeman film that’s all over TikTok? Everything we know

He’ll be starring in nude sex scenes in it