It came after controversy causing a member to resign, claiming chat was ‘transphobic’

The Conservative Association at Cardiff University now requires members to sign a contract agreeing to a code of conduct before they are allowed to participate within the society’s group chat.

The code of conduct states that its purpose is “to set out the minimum standards of behaviour expected from anyone representing CUCA in any capacity.”

This comes as the secretary of the society stepped down on Monday, claiming within his resignation that “transphobia” was present within the society, adding he has “never felt quite comfortable” remaining part of it. 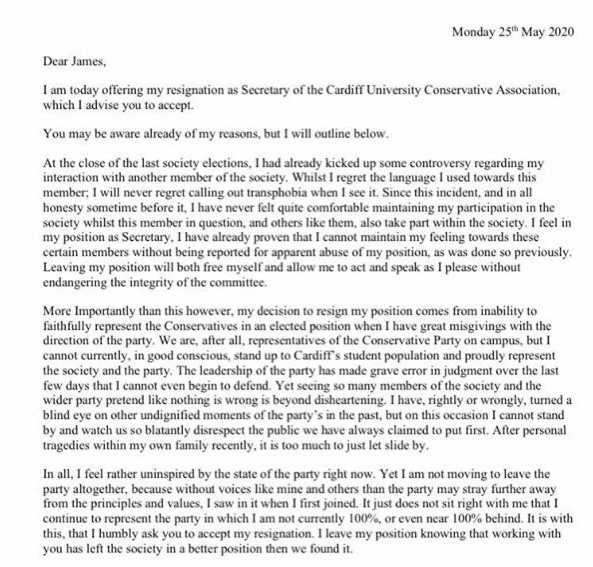 The president of the society claimed the secretary “for a while has had a number of differences with quite a few of our members who are more to the right than him.”

He added: “It’s a political chat. Views are constantly being debated and again we have people who, unlike me, fundamentally believe that there are two sexes and two genders because of their religious views. Which I fundamentally disagree with, but they are more than entitled to have them. If they believe that because they’re religious, so be it.”

A message sent into the group chat by the president of the society was brought to the attention of The Cardiff Tab, with a member viewing it as “inappropriate”.

The president claimed, however, that he was simply playing “devil’s advocate” in the “heated” discussion in a hope to “alleviate some of that heat.”

The code of conduct has a section focused on members of the Executive Committee which states they should “lead by example to encourage and foster respect and tolerance.”

One of the motions requires that members “should not partake in discrimination or discriminatory language based upon the characteristics defined in Sections 1.10, 1.11 and 1.12” which include “Race or Ethnicity or Nationality”, “Sex”, “Gender”, “Sexuality or Sexual Orientation”, “Religion”, and “Disability”.

“Members are reminded that discriminatory language can be subjective and that, when discussing contentious topics, a degree of thoughtfulness may be necessary.”

When asked by The Cardiff Tab if it was his responsibility as president to remove himself from certain discussions, he responded: “That would be like asking the prime minister not to comment on an issue because he’s the prime minister.”

Some members of Cardiff University Conservative Association are displeased with the enforcement of the code of conduct, with one person stating: “The code of conduct seems like complete authoritarian overkill, and inappropriate for a society who just want to have fun. I am not aware of other political societies who have such a conduct.”

The president of the society, when asked why these codes have been enforced, responded: “It’s a requirement by the SU. You have to have it. The SU asks all societies to have a code of practice.”

However, when The Cardiff Tab enquired to other political societies as to whether they used codes of conduct in the same manner, The Cardiff University Liberal Democrats responded: “We don’t have an explicit code. I think it’s a honour code that we treat each other with respect.”

• Cardiff Uni ‘hopeful’ that students can return in September