In the statement, they emphasised how they expect “all of our students to treat each other with dignity and respect” and that “as soon as this anonymous post was brought to our attention we took immediate action.”

The post, which was uploaded to Cardiff Confessions, saw someone admit to repeatedly spitting on the first ground floor kitchen window in Taly Gate. They explained their motive was ‘to show the Tories who inhabit that sh*thole a bit of pain and suffering.”

No students have been named as their post was uploaded anonymously. However, the university has stated that “any student found to have acted in this way will be subject to our Student Conduct Procedure. We can assure students that such behaviour will not be tolerated.” 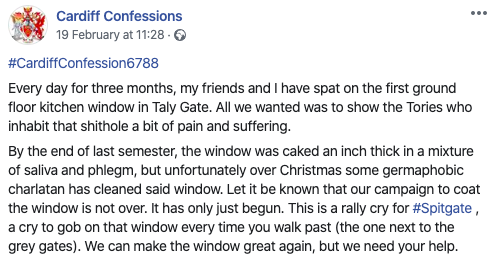 The post attracted many comments on Facebook, with people saying “that’s disgusting!” and “you should all be ashamed of yourselves. Grow up!”

The post also claims to be a ‘campaign’ and explains it has ‘only just begun’, issuing a warning that they will not stop spitting on the window, despite the university’s condemnation.

We condemn this behaviour. We expect students to treat each other with dignity and respect. Any student found to have acted in this way will be subject to our Student Conduct Procedure. Such behaviour will not be tolerated. Read our full statement: https://t.co/dSaKK4dcuE

The Cardiff Tab spoke to Cardiff University Conservatives, and they said:

“We absolutely condemn this kind of behaviour. No student at Cardiff University should have to put up with this kind of abuse, no matter their personal political beliefs. It’s reassuring to see Cardiff University address this situation, it’s not acceptable for students to be intimidated on campus. We look forward to hearing what measures the university is taking to ensure this behaviour is not repeated.”