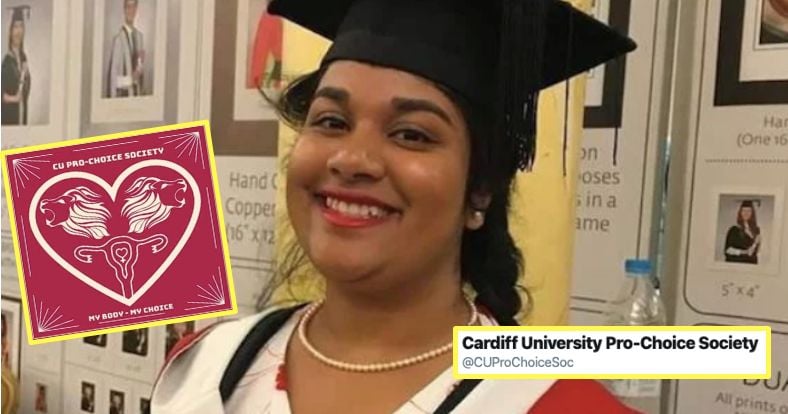 ‘I felt the need to set it up’: Cardiff student sets up pro-choice society

It comes after the commotion on Cardiff campus

A Cardiff student has set up a new pro-choice society, following the SU's new stance on pro-choice.

Isadora Sinha, who formed the new society, told The Cardiff Tab: "I felt the need to set it up as I saw students’ mental health suffering and many not having anywhere they felt they could turn to."

Isadora proposed the pro-choice motion in the 2019 AGM meeting, which saw a successful result with the SU adopting a pro-choice stance. However, Isadora suffered major backlash from radical anti-choice organisations and pro-life students at Cardiff University.

Since the pro-choice motion, many anti-choice protestors have displayed explicit images, as well as harassed fellow students, around Cardiff campus. Isadora told The Cardiff Tab: "Many students said that there was not enough support for them and with this being such a sensitive issue, many were reluctant to approach the SU or the university mental health service."

Isadora said this society was set up to reflect the views of the majority of the student body, and the main purpose of the society is to "advocate for the basic human right to bodily autonomy for pregnant people and supports each individual's right to choose".

The society will put on relaxed and mindful events that create a safe space for students to talk about sensitive issues and encouraging a "safe support network". Their events will be a means of students getting to know each other and a space to feel like they belong and are accepted.

As well as this, they "aim to spread awareness on legal and medical facts about abortion, miscarriage and pregnancy" through educational events and talks from academically acclaimed pro-choice speakers.

Isadora told The Cardiff Tab: "Statistically backed information that has not been taken out of context or manipulated being put out there is particularly important" so that students realise what they are hearing is the truth. She said this information has not been twisted to suit the society's beliefs, it is fact.

When asked what she hopes the society will achieve, Isadora said: "This society will help the student community heal from the discourse and move forward in a positive direction as well as signpost and support those that may be facing issues of this nature."

‘Firing squad for these baby murders’: The abuse faced by the proposer of SU pro-choice motion

Cardiff SU has voted to adopt an official pro-choice stance