A Cardiff University student has been jailed for 16 months for making racist and homophobic graffiti.

He also sprayed Nazi Symbols around Cardiff, including on the Senedd.

The 20-year-old was arrested at his home in Cheltenham on the 20th September last year.

After originally answering ‘no comment’ in interviews and not cooperating with police investigations, Richard-Goods eventually pleaded guilty at Cardiff Crown Court to 11 charges. 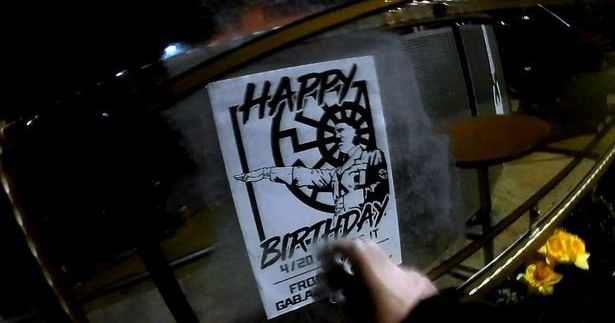 Right-wing graffiti had begun appearing around Cardiff soon after his arrival at Cardiff University in 2018.

CCTV footage showed the 20-year-old wearing a GoPro camera strapped to his chest, cycling from Cathays to Cardiff Bay on the same night a Nazi symbol appeared on the Senedd building.

Following the arrest for this offence, Cardiff police were able to link Elliot to multiple similar incidents. Evidence was found at his Cheltenham address, including spray paints, a number of System Resistance Network posters and GoPro footage.

System Resistance Network (SRN) is a Neo-Nazi group, which targets Welsh Communities and preaches zero tolerance of non-whites, Jewish and Muslim communities and states homosexuality is a disease.

There is also evidence to suggest Richards-Good was actively recruiting members to the SRN and targeted the route of Stand Up to Racism march in Grangetown in March 2018.

A racist student who commemorated Hitler’s birthday by daubing a Swastika on the Senedd is today starting a 16-month jail term after admitting a string of offences. Within two weeks of Elliott Richards-Good arriving in Cardiff to study at Cardiff University in 2018, racist and homophobic literature and graffiti began appearing around the city.Following an initial investigation by South Wales Police, officers from the Wales Extremism Counter Terrorism Unit (WECTU) tracked down the 20-year-old after piecing together CCTV which showed a cyclist with a GoPro camera strapped to his chest, riding from Cathays to the Senedd and back on the night the Nazi symbol appeared on the government building. But it was after he was arrested at his home address in Cheltenham on September 20, 2018, that officers were able to link him to the further offending they suspected him of. More details ? http://bit.ly/2qbeu7i

Richard-Goods has been charged with 16 months imprisonment and was also made the subject of a five-year Criminal Behaviour Order.

Detective Superintendent Noel Harris of Wales Extremism Counter Terrorism Unit, said: “Tackling extremism in all its forms is a priority for WECTU and South Wales Police and this case demonstrates that we are committed to working together to both prevent and detect it.

“Cardiff is a welcoming and vibrant multicultural city and Richards-Goods’ abhorrent views and actions rightly caused great concern amongst the local community. Our officers were determined to apprehend the person responsible as quickly as possible, both in order to prevent further offending and to send out a message to the community – and the minority who share Richards-Good’s racist ideologies – that it will not be tolerated."

• ‘Firing squad for these baby murders’: The abuse faced by the proposer of SU pro-choice motion