The teenage boy was killed behind Cathays train station in June

18 year old Fahad Mohamad Nur was found with 21 stab wounds after being chased through the streets, the court heard.

The murder took place outside behind Cathays train station in June.

Cardiff Crown Court heard that Mr Nur had been chased down the lane behind Cathays train staiton by the three men after midnight on June 2nd. 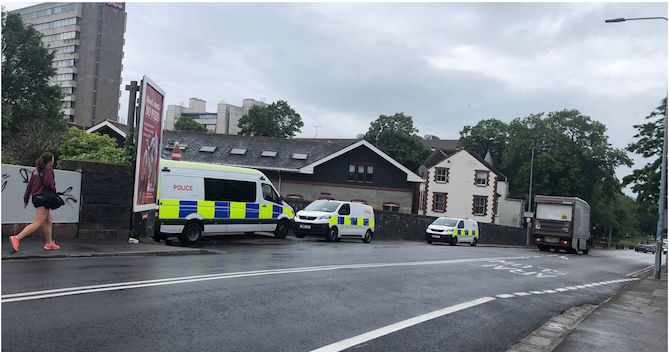 Mr Nur also displayed defense injuries to his face and arms. He later died at the University Hospital of Wales from his "catastrophic injuries", including a fatal wound through the heart.

Prosecutor, Michael Jones, told the court that Mr Nur had hundreds of pounds in cash in his shoes.

He said: "If this matter was drug related may not be known, but it is not about why but about how a young man was mercilessly stabbed to death"

"Having left him for dead, they fled the scene."

Two weeks after the attack a meat cleaver and a kitchen knife were found by the toilet block near Cardiff University by children, leading to Mr Jones describing the attack as "a determined and calculated pursuit to corner and kill him".

"What took place in the lane was witnessed by others who described what they saw as a relentless attack on Mr Nur," Mr Jones added.

Abdulgalil Aldobhani's admitted to seeing Mr Nur, but claims that he acted in self defense, stating that Mr Nur was the aggressor who had produced two knives.

Mr Shaddad said he intervened in the confrontation to stop the violence.

Mustafa Aldobhani stated in his defence that he was not in the lane and took no part in the murder.

Ms Arar said that she was not aware of the attack, nor was she told when she came to Cardiff to pick up the the men.

The Cardiff Tab will update you as the trial continues.