Is it even Christmas without Cirque’s winter special?

Every year, Cirque Du Soul arrives at Cardiff SU with its themed nights and extravagant deco. Unfortunately, the nationwide event will not be coming to Cardiff this December, as it has been cancelled.

Photos from our Cardiff show are now up! We’re back at Y PLAS on 5th December with @UKShapeshifters for our Winter Special and final Cardiff show of 2019 ?https://t.co/RiQiaWRtFl

Cirque Du Soul released a statement on Facebook cancelling the event, saying it was "due to circumstances beyond [their] control" and that the cancellation was a "reluctant decision". 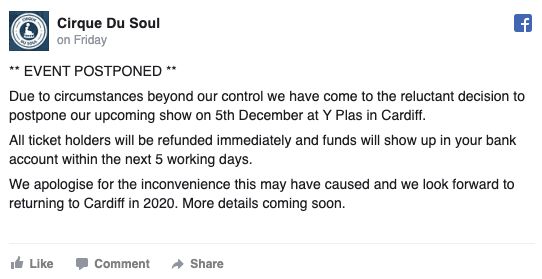 For those of you who have already brought tickets, Cirque have announced they will issue refunds immediately. However, refunds aren't necessarily what students want, as the event comes to Cardiff every year and many students await its arrival.

The Cardiff Tab asked ticket holders how they feel that the event has been cancelled so suddenly.

An ex-Cardiff student, who was hoping to come down for the event to catch up with friends, said: "I was coming down to Cardiff to see my pals and it's ruined our plans. We love Cirque so it's such a shame they've cancelled without any real explanation."

But don't fret, this isn't the last time we shall be seeing Cirque in Cardiff, they've said they'll be back in 2020. And plus, you've always got Liveys.