No existing positions will be removed

At the 2019 AGM on Thursday, Cardiff students voted on the Sabbatical Officer review. They chose not to instate a VP for Welsh Language.

Due to funding concerns, an eighth officer position for Welsh Language, as voted in the 2018 AGM, was not implemented this year.

Instead, three alternative proposals were put forward in the 2019 AGM: the removal of the VP Postgraduate, the merging of VP Welfare and VP Education, or to stay the same without the creation of a VP Welsh Language.

335 of 434 votes cast were in favour of staying the same with review, meaning no new officer position will be created. 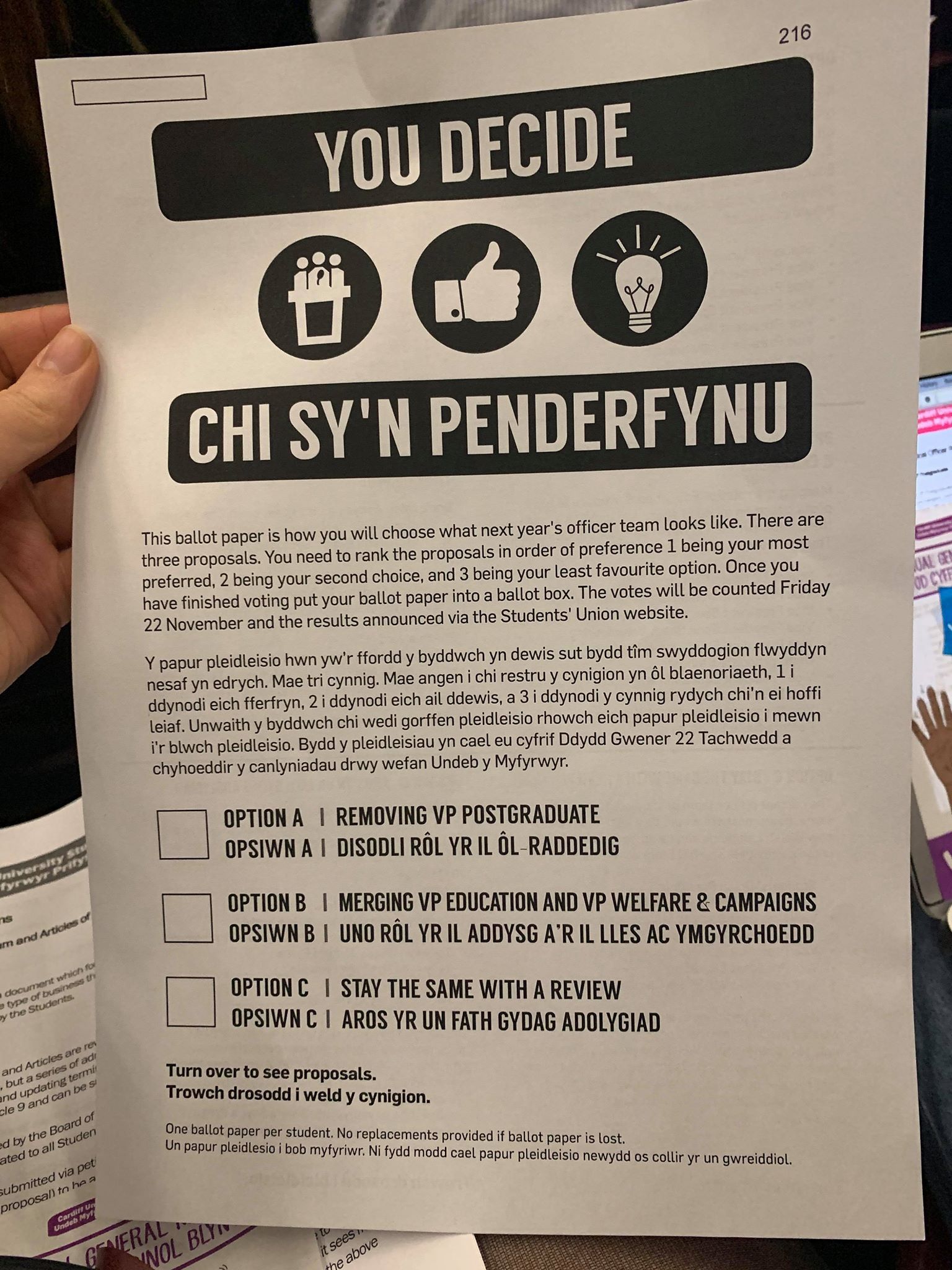 The other proposals to remove the VP Postgraduate or to merge the positions of VP Education and VP Welfare to allow for the creation of a Welsh Language VP proved unpopular, gaining only 3 and 38 votes respectively.

Nick Fox, the current VP Postgraduate, expressed that his position is 'indispensable' to an underrepresented postgrad community of 1100 students, citing the higher risk of mental health concerns.

Tomos Evans, the VP Education, showed his concern that the merging of VP Education and Welfare would be 'detrimental to students at Cardiff' and would increase individual workload.

William Rees, the proposer of the 2018 motion to create the position, argued that none of the proposals were satisfactory.

He spoke against the proposal to stay the same, yet urged everyone to abstain from the vote. He said the creation of a Welsh Language VP was meant to 'increase student representation,' and yet every option given instead limits it.

He urged voters to abstain until the chance to vote for an eighth officer, as passed last year, was presented to them, dismissing the funding concerns as not valid.

He then ripped up his ballot paper on stage.

The sentiment of inadequate options was shared by Nick Fox and Tomos Evans. Whilst they both spoke against the removal and change to their own positions, they both stressed that they were not in opposition of a VP Welsh Language.

"We appreciate that not all students will be happy with the result of the officer review. However, the Student's Union provided options for the creation of a full- time Welsh Language Officer in the spirit of the motion that was approved by AGM last year."

'Underrepresented and expendable': Postgrads livid that VP role may be axed for new VP Welsh Language

Cardiff SU has voted to adopt an official pro-choice stance

Cardiff SU is set to become a living wage employer