‘He tried to touch my arm and asked me where I was going’: Cardiff students are terrified walking home at night

Many have come forward to raise concerns

A recent post on Overheard at Cardiff University has sparked fear amongst students, who are being advised not to travel alone at night.

The post consists of a female warning other girls that she was fearful of being raped on her way home from a night out. 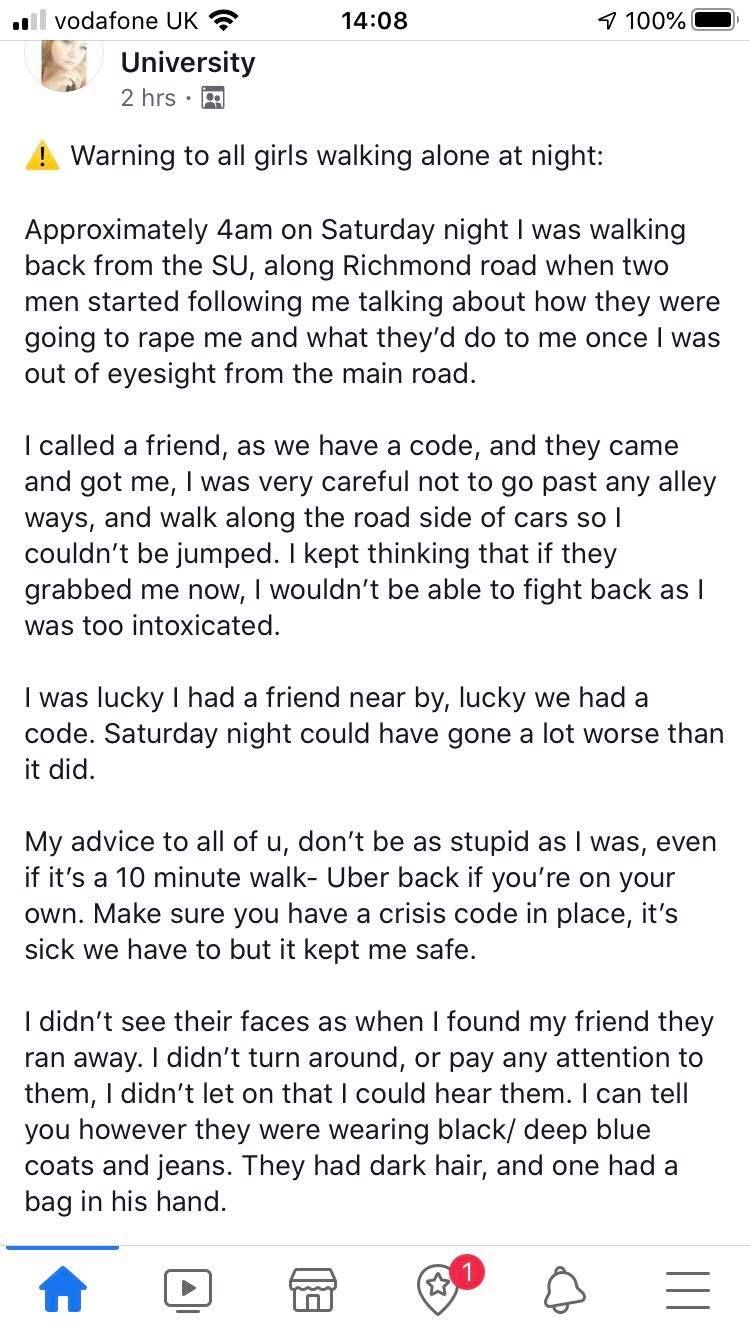 The incident, which occurred in Cathays, has left Cardiff University students petrified after the female was followed by men who revealed their intentions 'to rape' her, as she was walking home after a Saturday night out in Cardiff.

The Cardiff Tab has reached out to students who have experienced similar situations to raise awareness of how important it is to be accompanied whilst walking home at night.

We have protected their identities.

Person A was followed home when passing a popular student pub Gassy's by two unknown males who continued to make threatening claims suggesting they "can't wait to get my dick up in her tits" intending to "grab" and "rape" their victim.

The men continued to follow Person A until she was able to contact her friend using 'a code word' which allowed her friends to know she wasn't safe. The victim's friend then arrived scaring off the males and both arrived home safely.

The incident "[freaked] out" Person A and led to a later "panic attack" due to the anxiety of the event.

Person B told us of a time when they left popular nightclub Pulse and a group of friends were "chased down the street" by homeless men in Cardiff who called them "faggots". Person B says they felt "pretty scared to be on the streets in town for a while".

Person B also encountered a similar situation in the summer, where they were approached by a man after spending Pride in Cardiff. The man began "touching" Person B, "asking to kiss me, to which I repeatedly said no". Person B escaped the man by "pushing him off me and running off'.

Following this, Person B was left to feel "violated" and explained that they "avoid walking home alone if they can".

Person C who works in a bar till late hours said she "would constantly get drunk men latching onto me" and "would just walk fast to get rid of them".

Upon being followed by a man in the early hours of the morning, Person C explained "he asked for directions into town and said he didn’t know where he was. I pointed him to the right direction and went to cross over the road to my house and he tried to touch my arm again and asked where I was going."

Aside from the anonymous accounts, many other students have reached out to The Cardiff Tab and explained how they felt unsafe at night in the city. One person said "I don’t walk up that creepy alleyway by Cathays train station on my own anymore after all the awful things that have happened up there." Another said "it’s so scary and just makes you think how many times you’ve actually walked home super drunk and are so vulnerable."

It has also been reported that an 18-year-old woman was grabbed on Pentwyn Road in Cardiff, with a man-hunt underway as a result.

It is utterly important to make sure you and your friends are travelling home from a night out in a safe way. Make sure you have company, or if that isn't possible, let someone know you are walking back at a particular time and will be alone.

For more information on how to keep safe at night, click here.