The Bristol students are part of People and Planet

In 2014, it was estimated that just 300 of Samsung's workers in South Korea were members of trade unions and Samsung employs directly more than 300,000 people.

The group, People and Planet, are protesting against Samsung accusingly operating a 'no-union' policy. The group hopes to abolishing this policy.

The protesters told The Tab:

"I fear that people will disengage from action in fear of being called out. Opposing Samsung, and it's 'no-union' policy, is no difference. I say to these people: use your voice!" 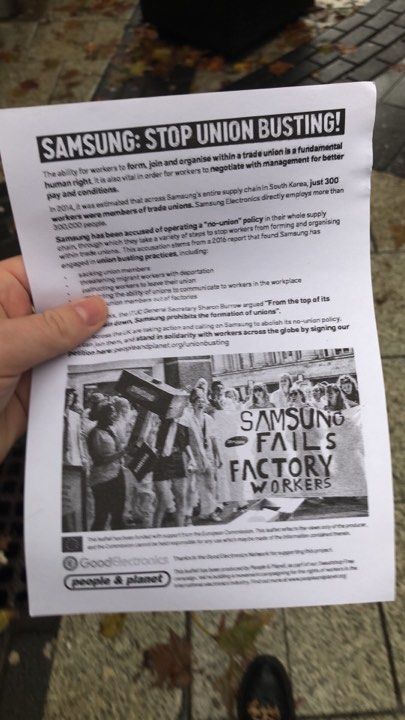 They're handing out pamphlets

"There is no financial profit great enough to justify not protecting your employees from health hazards such as cancer or suicide. Sweatshops are not a stepping stone for poor people in poor countries or a 'necessary evil’ on the road to development. They are places where people’s basic human rights to health, dignity and safety are utterly violated.

'We have to find the courage to challenge our beliefs and realise that sweatshops are the product of global and national patterns of domination rooted in racism and capitalism. Supporting Samsung, be it actively or passively, is endorsing the violation of people’s basic human rights. So the question is, why would you not support this action?"

This protest in Cardiff is part of their '48 hours of action against Samsung' over the 25th and 26th October.