Just before the Uni announced it was divesting from fossil fuels, two of the activists protesting it were on hunger strike

This was part of a three year long environmental campaign

Two members from the student activist group Cardiff University People & Planet were on hunger strike for eight days as a part of their campaign against Cardiff University's investments in fossil fuel companies.

Second year Cardiff University psychology students, Friederike Lürken and Lucienne Billy, got into their eighth day without food, a day before Cardiff University made the decision on the 20th of March to stop investing in fossil fuel companies. 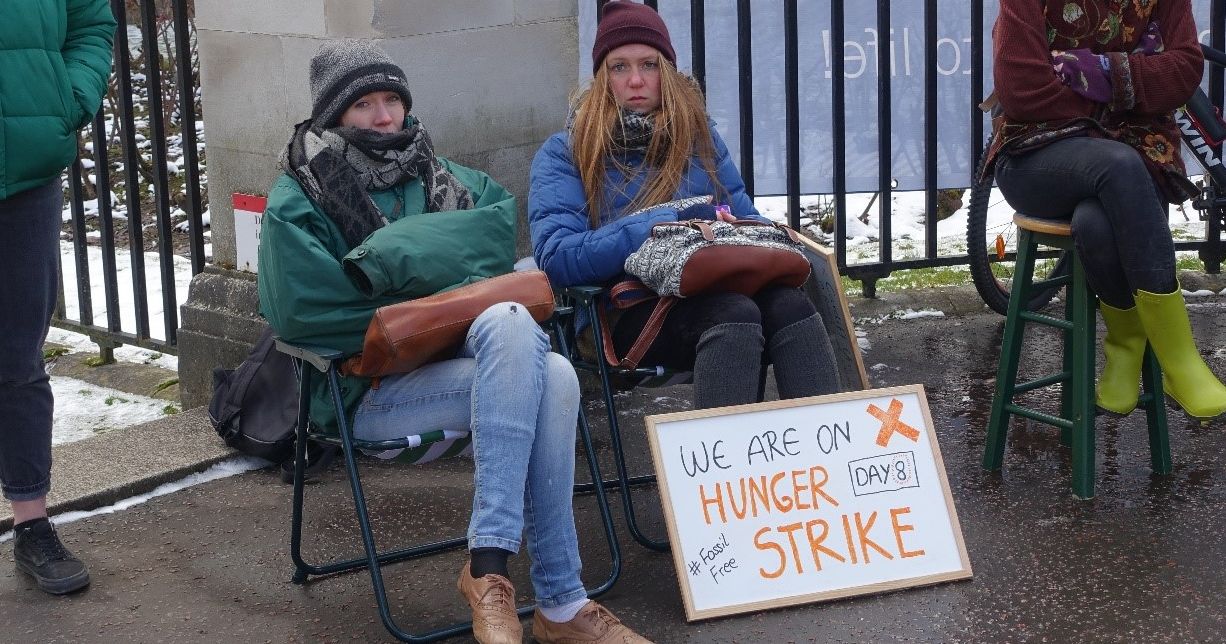 Speaking to The Tab Cardiff on the last day of the strike, Friederike explained that:

"Although I am feeling quite weak, I'm in a good mood, so that makes all of it much easier, but I am so looking forward to actually stopping the hunger strike at some point."

Around twenty other students, including most of the Cardiff People and Planet members, fasted for one day to show their support for the two girls. Whilst students from the University of Bristol organised a similar action last Friday, to demonstrate their solidarity with the Cardiff University Fossil Free Campaign.

Lucienne stated her decision to go on hunger strike was not difficult if it would help convice University to meet the group's "urgent demands."

"Our hunger strike aims to demonstrate the urgency of immediate climate action, with fossil fuel divestment as a first step. It is a basic demand that has been discounted by Cardiff University for too long."

This hunger strike was part of a much longer campaign, that has lasted for three years. Over this period, they have collected signatures from nearly 1,300 students and 100 University faculty members and have carried out a number of demonstrations.

Their most recent actions include a sit-in outside the Vice-Chancellors office on the 21st of February and the controversial spray chalking in the entrance hall of the Main Building on the 6th of March.

Their spray chalking produced a mixed response, as a number of social network users expressed their opposition to this particular action. 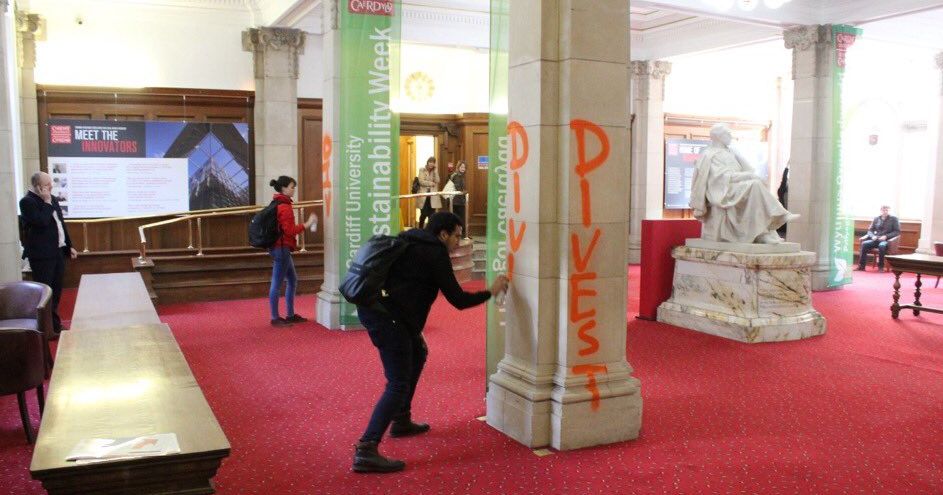 A member of Cardiff University People & Planet spray chalking a pillar in the Main Building on the 6th of March.

Friederike had this to say in response to the critics:

"We never intended to cause any permanent damage, I know there has been some work going on this weekend to remove it. Obviously, all of us hope that it has been successful.

"I hope all of these people understand that under normal circumstances we would never do such drastic action and if they look at the history of our society we never have.

"Obviously they can be as vocal as they want on the internet, I am all for freedom of speech, but I wish they were as vocal in personal communications with us so they can understand our point of view on the story."

As reported by The Tab Cardiff, the cost of cleaning the chalk off of the Main Building has been speculated to be as high as £10,000. However, the true cost of the repairs has not been confirmed.

The disciplinary action the group will face is also not yet known, though Friederike wants to assure everyone that they expect some sort of punishment eventually.

She said that "the process is ongoing" and explains that:

"There were some rumours that we just got away with it and that nothing is going to happen to us, but that is not true at all. The procedure is still going on, we just don't know yet what is happening."

Following the University's announcement on the 20th of March, the group took to social media to express their elation.

The moment we've been campaigning towards for so long is finally here and we're SO pleased to hear @cardiffuni have committed to full divestment from fossil fuels by 2021! So proud of all our activists for their tireless campaigning on this issue! ??? https://t.co/NLjx9dgi2H

In the announcement, the Vice-Chancellor, Professor Colin Riordan stated that:

“Environmental sustainability is a core value of our strategy The Way Forward 2018-23 and the decision to divest from fossil fuels is the latest milestone in our journey.

“Along with our pledge to phase out the use of single-use plastic by 2023 – as outlined in our strategy – the move to divestment sends a clear and positive message that we are committed to environmental sustainability and tackling climate change.

He also thanked everyone who "shared their views" about the decision.