Cardiff’s ninth naked bike ride will take place to show the exposure and danger to cyclists on the road.

The ride will start in Sophia Gardens outside the Mochyn Du pub and 80 people are currently taking part. 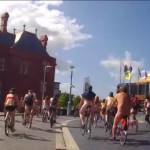 The journey’s distance is 8.5 miles long and will include the city centre, Cardiff bay and various parks.

Some people take part in their underwear as full nudity is not required, however it is recommended.

Oliver Pepperell, a cyclist who studies Biology at Cardiff University, said: “I’m not entirely sure how it highlights danger on the road. I suppose it shows the number of avid cyclists in Cardiff and so would make drivers look out for them more but I doubt it really.”

“Everyone knows cycling is dangerous and yet still people cycle around with no helmets and cycle across red lights. So I think it’s sown to the cyclists themselves to make it as safe as possible.”

The second year added: “I certainly won’t feel safer after a bunch of naked people have paraded themselves through the streets.”