Three friends who caused life-changing injuries to a man at Cardiff University students’ union bar have each been jailed for two years after pleading guilty to causing grievous bodily harm.

On 4th October last year Stefan Morris was on a night out with his girlfriend in the SU bar when he took objection to Christian Mahoney, 23 from Llanelli, chatting up his girlfriend. 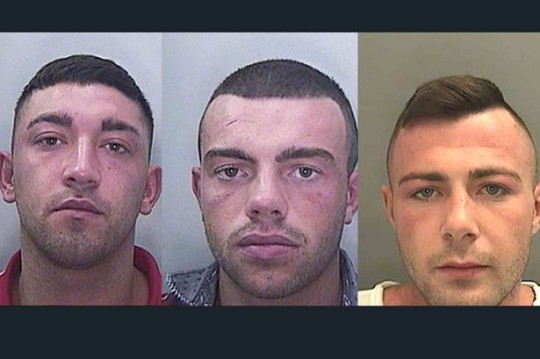 At least they’ll be safe if they drop the soap

When he protested he was punched to the floor by Mahoney. Two of Mahoney’s friends, 24-year-old Thomas Bowen and 21 year old trainee plumber Thomas Evans, then joined in the attack.

Prosecutor John Lloyd told Cardiff Crown Court: ‘All three then punched and kicked him to his body, head and face, he was either pushed into a reinforced glass safety door or it shattered in the incident but his right arm suffered a significant wound and he needed two operations under general anaesthetic’.

Although Mr Morris can’t remember much of the attack himself, witnesses describe seeing the defendants taking it in turns to assault him, kicking him to his ribs, head and face.

The Court was also told that as a result of his injuries, Mr Morris will never have the same function in his arm as he had before and will need long-term therapy.

Lawyers for the three said they had come to Cardiff on October 4 last year for a ‘pleasant night out’. They appealed for prison sentences imposed to be suspended, saying they needed their freedom to complete the last few months of their apprenticeships, but Recorder Wyn Rees refused.

Bowen’s solicitor said: ‘The incident unfolded in front of him and he joined in’.

The judge agreed nothing would have happened if Mahoney had not started the trouble but told the court: ‘I would be failing in my public duty if there were not immediate custodial sentences’.

All three defendants had previous convictions for public order breaches and Evans and Bowen had been in court for assault in the past.