Fifteen officers needed to arrest one activist after she wrote a protest slogan on a memorial plaque.

A student has been arrested for writing a protest slogan (in chalk) on the wall of the University of London Senate House building.

Officers took Konstancja Duff into custody for writing the slogan on a memorial plaque, but could not get her into the police van to take her back to the station. They called in a support unit while a passer-by filmed the action on his phone.

The video has since gone viral among London students. 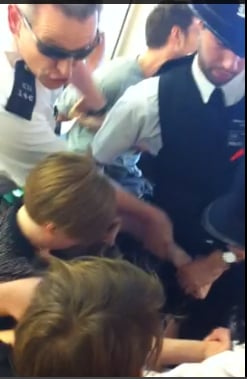 Duff was campaigning for fairer working conditions for outsourced workers employed by the university, such as improved sick pay and holidays. She wrote her slogan using decidedly impermanent chalk.

Police entered the union after the incident to make the arrest, pinning Duff to the ground and handcuffing her.

However, instead of bowing to the might of the law, the plucky student managed to remain glued to the ground while officers attempted to prise her from the building. 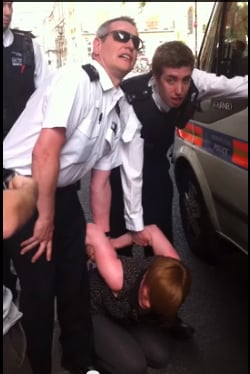 Despite what seems to be a certain degree of pain, the protester refused to yield to police force, perhap inspired by the righteous indignation of her friend yelling Lefty slogans at all who would listen.

Out in the street, the police managed to get Duff to the door of the van, but not actually into it. 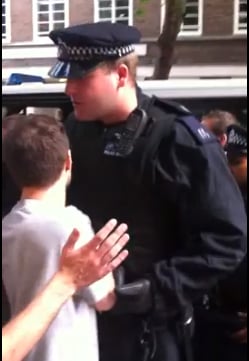 As the officers’ frustration grew, one irritably demanded the cameraman stop filming, before realising he was within his rights to do so.

After a while the backup unit was called and the video footage ends with a stalemate between a group of 15 police officers and one woman.

Margaret Thatcher might be dead, but her legacy of heavy-handed policing and suppression of appeals for better rights for workers are alive and kicking.

Whatever you think about this particular incident, and if the shouty boy sounds like a middle-class Joey Barton, there is no doubt the cause being promoted is a good one. Their Twitter is @3CosasCampaign and you can find out how to support the campaign here.