Whilst the large number of Cambridge colleges flying pride flags in support of LGBT+ History Month this February is a cause for celebration, Cambridge still has far to go when it comes to flag flying. With students being told explicitly not to fly flags in college accommodation this year, and the inconsistency in flag flying policies both within and between colleges, there is clearly still much work to be done towards creating policies that allow students to fly flags and express their support and allyship freely.

An issue of virtue-signalling?

Some colleges including Christs’, Peterhouse and Queens’, have already taken down their pride flags put up in support of LGBT+ History month, which has heightened the sense among students that these flags were merely virtue signalling. Taking them down early would not be such a cause of scepticism if colleges consistently demonstrated support and understanding in the matter.

However, the incredibly harsh stance on individual flag flying taken by certain colleges this year, combined with inconsistency in policy on a university-wide level, has led many to question how much their college actually supports the LGBT+ student population.

When contacted for comment, the Senior Tutor at Christ’s said: “Our students only asked for the flag to be flown for the start of LGBT History month, on 1st February, so it doesn’t stay up for the whole month. Christ’s only flies flags on occasional days during the year (e.g. on graduation day) and doesn’t leave flags up, so most days of the year there’s no flag at all. It’s important to us that we can fly a flag at short notice (for example on the day of a funeral as a tribute to the deceased).”

Flags taken down at Queens’

Queens’ students were sent an email last term telling them to take down all flags from their windows immediately, after a pride flag was hung from one of the gates at the college. They were told that it was because “the College cannot adjudicate between competing interests and deeply held beliefs” and that they “have a legal obligation not to engage in political activity and to preserve freedom of expression for all […] the flying of flags generates strong feelings and we receive complaints from the public as well as members of college about our custodianship of historic buildings.”

Regardless of intent, these comments can be deemed as insensitive as they seemed to politicise students’ gender identity and sexual orientation. Queens’ students were outraged at this, draping bunting across three stories of freshers’ accommodation in protest – which was then removed by the college.

The attitude shown towards pride flag flying at Queens’ has clearly generated much hurt among the LGBT+ student population. Hannah Chen, a Queens’ student, commented on the college’s response: “In no way is being LGBT a political statement, it is not an active choice” and that “calling it political shows a clear lack of understanding and empathy for the LGBT community.” 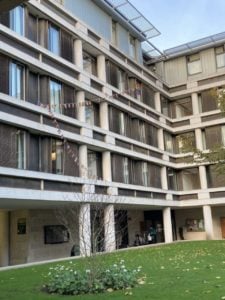 The Trans flag hung by the college from the Mathematical Bridge not soon after highlights the apparent contradiction in the college’s policy. The college said it wanted to make a “collective statement”, yet in doing so it seemingly contradicted the reasons it gave for bans on flags in accommodation. It is understandable why the mixed messaging has left students angry and generated scepticism about the college’s real intent.

Hannah expressed her frustration at the college’s hypocritical policy: “It’s ironic that [college] allowed the “collective expression” of the Trans flag on the bridge, and the pride flag this month, in apparent solidarity with the LGBT community, but when it comes to allowing self-expression of LGBT students, they prioritise the “complaints of the public.

“The flying of the pride flag and the trans flag on the bridge was nothing more than virtue signalling, and I personally as an LGBT fresher now feel like I am not supported by my college.”

Queens’ is not the only college with these issues. At Peterhouse, during Trans week of remembrance last term, there was huge controversy over whether flags could be flown. Students were told to take down their flags, in some cases even if they were inside the students’ own rooms rather than the windows. Events were comparable to those happening at Caius at the time, after which many students started hanging flags in protest. 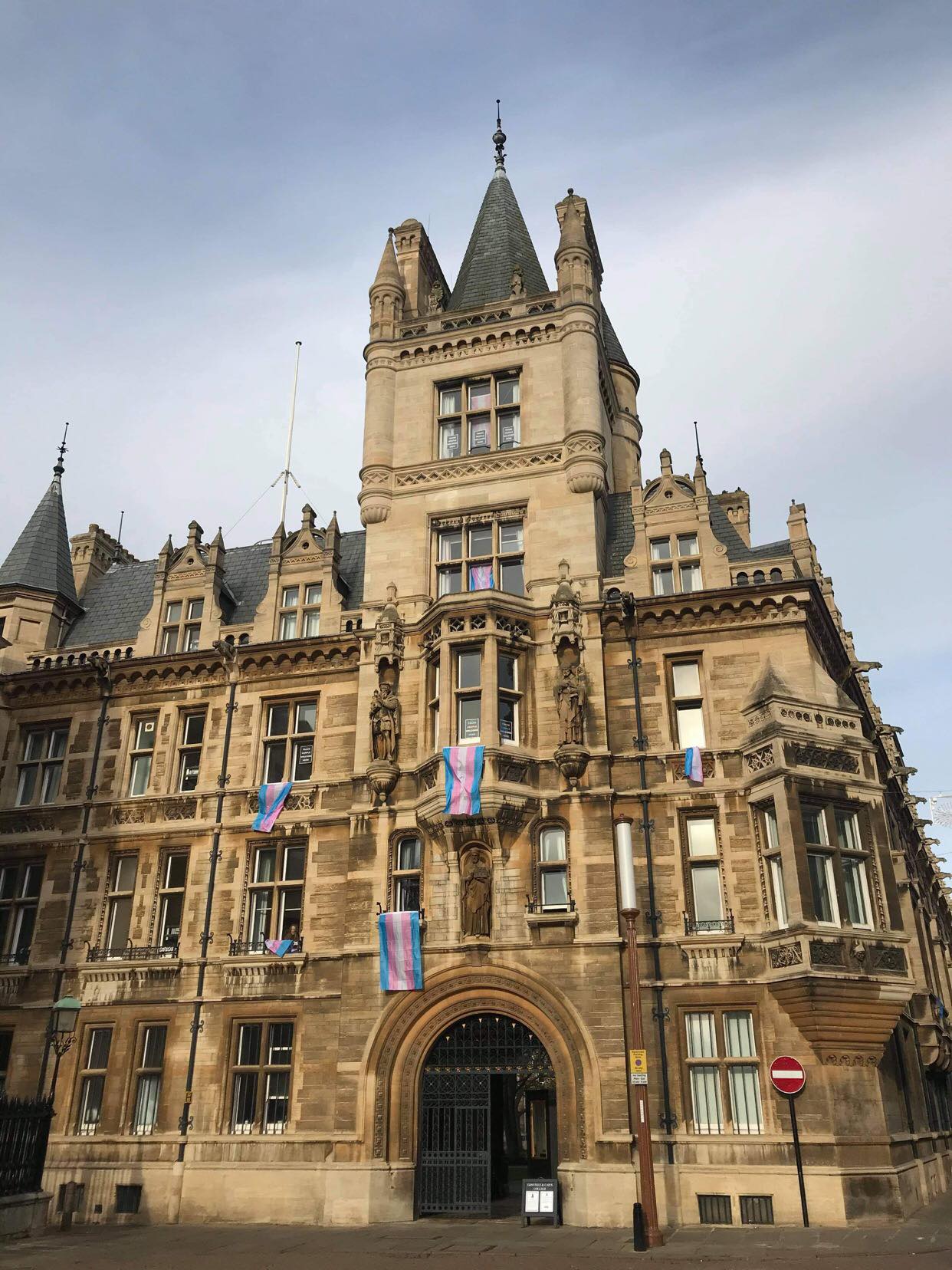 When contacted for comment, Caius Senior Tutor Dr Andrew Spencer said: “The College regulations allow for flags and banners to be flown from College rooms with tutorial permission. This has been granted for specific purposes.”

At the heart of this controversy is a question of trust. It is understandable that colleges are cautious about allowing offensive flags to be flown. However, pride flags do not fit into this ‘offensive’ category. Colleges have shown agreement with this by flying pride flags in prominent places themselves. Students should be trusted enough to make this distinction alone and should only face consequences if they fail to do so. A pride flag hanging from a window? Great expression of identity and allyship. A BNP flag? No-one wants to wake up to see that – please take down. These two situations are not the same and the most students will be able to understand that.

Student, Kiran Bodasing, spoke to The Tab Cambridge about this issue: “There shouldn’t be any reason they don’t allow students to fly flags the colleges themselves fly. It’s hypocritical and letting people fly pride flags isn’t going to open the floodgates for people to fly just anything, some of which may be harmful, which is probably what the college is scared of.

“They should trust and respect students enough to fly certain flags.”

There have been steps taken in the right direction. Many JCR officers have been trying to negotiate changes to individual flag flying policies with their colleges.

At Queens’, for example, students were told at the end of last term that there may be an amendment to the policy that would allow flags to be flown ‘inside windows’ as a result of JCR discussions with college. This was welcomed by students, particularly those who had been told to take their flags down last term. However, there has still not been an announcement of an official change in the rules. Similarly, there has been no news of policy changes at other colleges, though student lobbying is ongoing and provides hope.

Milo Eyre-Morgan, SU LGBT+ Campaign Trans and Non-Binary Rep, spoke to The Tab more about these ongoing issues: “A college flying the pride flag only has as much significance as the college is willing to prove through its actions. Those that do fly the pride flag do so because of hard work and pressure from student representatives at the college, so the flag doesn’t speak to whether the college actually supports its LGBT+ students (though if the college refuses to fly it, that’s obviously a bad sign).

“This is why we’ve launched the Care+ campaign: many colleges are failing to meet the needs of their LGBT+ students. It is heart-warming and encouraging to see pride flags, and the progress pride flag in particular being adopted by more and more colleges but they need to let their actions speak at least as loud as their words.”

In fact, the more tolerant flag flying policies at other colleges further invalidate the reasons some colleges are providing for banning individual flags. For example, at Murray Edwards and Christ’s, there are no restrictions, provided that what is flown is not offensive. They have, quite rightly, not characterised LGBT+ flags as potentially offensive political statements and damaging to historical buildings, and have trusted their students enough to know they will not abuse the policy.

If some colleges take this stance, why then do others take the opposite? On a university-wide level, Cambridge’s policies on flags are inconsistent.

The reasons colleges have given for banning flags, including pride flags, has left many members of the LGBT+ community feeling misunderstood and hurt. The mixed policies that contradict each other adds fuel to the fire, as students are left questioning the real intent of those colleges that ban these individual expressions of identity.

Cambridge has done so well expressing collective support to the LGBT+ community this month, but they can do better by overturning their contradictory policies.

• ‘Colleges haven’t given enough attention to LGBT+ people’: Interview with the Care+ Campaign

‘Reclaim these streets’ is a Cambridge issue, and we need to talk about it

People of marginalised genders don’t always feel safe on the streets of Cambridge, and we need change

‘This is our music, this is what we can create, this is how we’re connected’