‘If you see relatives on the ward, you know someone is dying’

With the latest barrage of “scenario planning” from the University it’s easier than ever to let anger at the disruption caused by Covid-19 supersede the horror of the thing itself.

The quotidian oppressions of online exams, virtual years abroad and a socially distanced Michaelmas can all feel more real than statistics on the news.

For clinical year medics working at hospitals around Cambridge, however, the threat of the virus is all too real. “There’s a general atmosphere of kind of, like, dread, I suppose” says Rory Durham, a fourth-year medic at Christ’s who’s been working on the intensive care unit at Papworth Hospital. “You can feel it. People are getting on with their jobs, but it’s all there at the back of their minds.”

The pandemic has caused unprecedented disruption to the running of the hospital. With ten to fifteen percent of staff forced to self-isolate at home at any one time and the urgent repurposing of personnel to ICUs there has been a complete standstill in routine operations, a devastating blow for the UK’s leading heart and lung hospital. “Operations that normally go on all the time for patients with conditions like angina – at the moment they’re just not happening”, Rory says.

The possibility of infection also means that patients with chronic conditions like cystic fibrosis and severe asthma are not coming in to receive treatment – “the risk is just too high.”

Mass re-purposing has also meant that the initiation process for students was unenviably swift. Rory notes that “the tagline on that was something like ‘this is normally a course we give over sixteen weeks to nurses who want to train in intensive care nursing, but you’re doing it in one day.’ It was so much information coming at us.”

Covid-19 has seen volunteers adopting much more hands-on roles than typical clinical students. “As a medical student you don’t tend to integrate into the team you’re working on… basically you go in for a couple of hours and try and learn something.” During the pandemic, however, student volunteers have become part of ICU teams, carrying out vital patient observations and facilitating the smooth provision of care; “It’s a lot of going in and out of critical care – I’m basically on call so if a patient needs to be moved to a CT scanner or if there needs to be a new bed space set up for a new arrival, moving ventilators… I’m just trying to help out, to do some little things.”

Most challenging is the emotional impact of exposure to a Covid ward. The coronavirus brings its own particular brand of misery in the isolation of patients. Rory commented: “It’s never nice being on an ICU, but what’s most upsetting is that these patients can’t see their relatives. I’ve brought in letters from families for the nurses to read out and pictures for them to stick on walls, but that’s the most contact. The only time the relations are allowed in is when the ICU staff have determined the patient is going to die.”

If respiratory support is to be removed, patients are allowed time in an isolation room with their families to say goodbye. Papworth’s position at the forefront of cardiac and respiratory care also means that it treats many of the severest cases of the virus. “A lot of the really ill patients from London have come into Papworth to have ECMO – they can be in complete cardiac and respiratory failure and still be alive. They’re just completely motionless, not even breathing. Most people in ICU – at least they’re coughing a bit through their ventilators, you can see their chest moving. But these people… they’ve been like that for weeks. It’s very strange to see.”

“I haven’t really processed most of this emotionally yet… I’m quite good at detaching myself but I think it’ll catch up with me at some point”, he says. Whilst volunteering has been a challenging experience, it has certainly been a valuable one; “while I’m working I just feel part of the team, but when I look back on it I think it’s going to be an important chapter in my life. These sort of experiences aren’t pleasant, but they’re the way you grow as a doctor and as a person.” 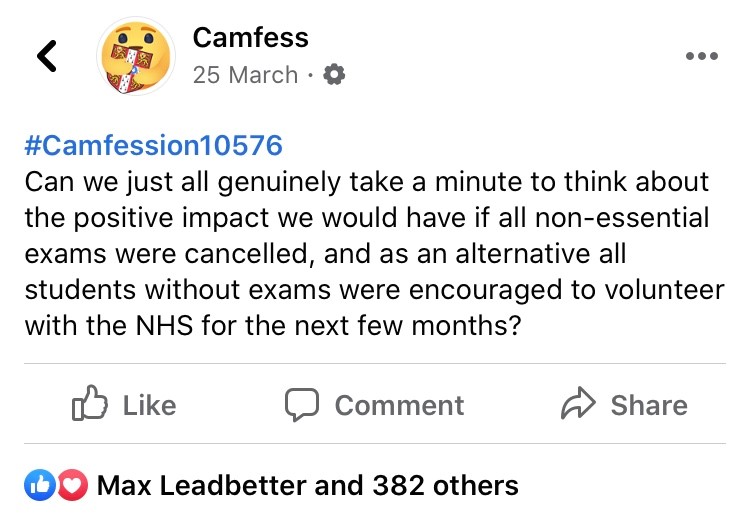 Cambridge students have called for the university to prioritise voluntary work

Despite the obvious educational and social merits of volunteer work, university policy has largely hindered student participation in the response to the pandemic. In an interview with The Tab in April, Senior Pro-Vice-Chancellor Professor Graham Virgo said that the university has striven for “as much flexibility as possible” in its approach to the virus and encouraged volunteering. “Certainly if a student feels that they want to engage in voluntary work of course they should do so”, he added. In practice, however, the controversial decision to push ahead with the majority of exams has left many students with no time to volunteer – as one third-year medic told me, “We still have projects and dissertations to complete on top of exams… most people just don’t have the time to help out”.

Indeed, even the organisation of the volunteer program for clinical medics has left something to be desired. Although many signed up a week after the University’s closure in March, assignments only came a month later with the result that the first round of inductions wasn’t completed until the 23rd April, a fortnight after the peak of Covid-19 death rates on the 9th. The University has been contacted for comment regarding these difficulties.

Hearing from a Covid ward may be sobering, but it also provides crucial perspective. The pandemic isn’t just cancelled plans and curtailed terms, it’s patients alone on intensive care wards and lives fought for and lost. Hearing from hospitals reminds one, however, that although there is a very human cost to the pandemic, there is also a very human fight.