“My prepubescent flamboyance has not aged well.”

Are you missing the bubble? The Tab has you covered with the start of a new series of profiles on notable students from across Cambridge.

London-raised Joel Rosen, 20, is a first-year student “allegedly” studying History and Politics at Trinity Hall. He is the Speakers Officer-Elect for the Cambridge Union.

My Cambridge weeks have a certain rhythm to them, particularly because of Shabbat. There’s normally a formal or two and couple of Union events. I try to go to as many talks from other societies as possible and visit friends in other colleges, because it’s always refreshing to get a flavour of something different. Someone always has a birthday and the obligatory pres and cake and subsequent nights out are a trustworthy combination.

Sundays normally start far later than intended. I have a bite to eat with mates and try to distract myself from impending deadlines with futile excursions (the Fitz, Granchester, Kettles yard etc.)  Monday and Tuesday are a bit work heavy and, to be honest, the days I normally catch up on what should have been done a week or two earlier. Wednesday cindies is a heavenly staple in the middle of the week with its memorable shenanigans.  By Thursday sheer guilt occasionally propels me to the Seely or another faculty library on Sidge. Friday normally involves a supo or three (yay, perks of a joint degree).

I turn my phone off from Friday night to Saturday night as disconnecting from technology is a part of the way I chose to mark to keep Shabbat. I enjoy a brief tranquil period of rest from the hustle and bustle of Cambridge life. I nearly always have Friday night dinner at the Jewish Society. Sometimes I plan another social on Friday night as well. Later on Friday nights, there’s something known as a tish, which normally occurs in the room of someone at a central college and involves a group of people sitting in a circle and singing Hebrew songs, whiskey in hand. It’s uplifting and a nice taste of home while at Cambridge.

How did you attain the position you hold?

What do you consider your greatest achievement?

Working as an emergency medic in Jerusalem despite my questionable grasp of Hebrew.

What has been your biggest disappointment?

The men of Cambridge.

When were you happiest?

Tel Aviv Pride 2019; hot weather and hot people.  I really felt at one with the world.

What was your most embarrassing moment?

In my year six primary school play, where I was an overly made-up Willy Wonka / Alan Sugar crossover. I’ve still got the DVD; my prepubescent flamboyance has not aged well.

Who would play you in the film of your life?

I want to think Timothée Chalamet, but in reality, it’s more likely to be Ben Platt. My friends see me as a wannabe, British, Payton Hobart.

What did you want to be when you were growing up?

To whom would you most like to say sorry, and why?

There was someone I was really nasty to in year seven, I still think about it from time to time. I still haven’t found the courage to apologise to him.

When did you last cry, and why?

When watching Lion, Saroo returning to his family gets me every time. We spend the first part of our lives trying to leave home and the next part trying to find it again.

What single thing would improve the quality of your life?

What is your greatest fear?

Blending into the crowd (or Michaelmas being cancelled).

What was the best kiss of your life?

A gentleman never tells (and since they are definitely a reader of the Cambridge Tab I sadly can’t).

What is the trait you most deplore in yourself?

I’m overly ambitious, and this often means I set myself unworkable burdens. I struggle to say no to things and overcommit. I was on six committees in my first year at uni, which, in hindsight, might have been a bit excessive.

What is the trait you most deplore in others?

What is the worst thing anyone’s said to you?

“You inspired me to vote for Jeremy Corbyn”.

What has been your closest brush with the law?

A  skirmish with a fascist at a demonstration at Parliament Square  that resulted in me getting a stern warning from a Police Officer. The skinhead just walked away.

What is the closest you’ve ever come to death?

Went out four times in one week last Michaelmas and realised while sitting on a kerb that I just didn’t have the stamina for the clubbing life. Prefer Cafes, less bodily contact, there isn’t a mist of sweat and (most of the time) Mr. Brightside doesn’t make unwelcome appearances. 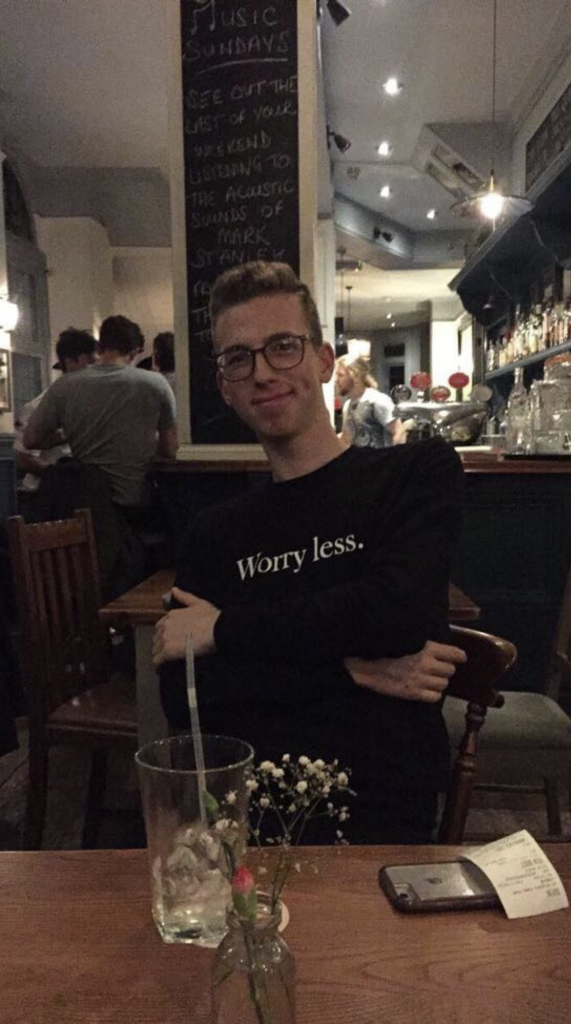 Joel has nominated Emaan Ullah as the next notable student to be profiled.