Graham Norton I’m coming for your job: The Tab talks to Tom McGachie, creator of Cambrovision

Eurovision plans in tatters? We’ve got the perfect thing for you…

If I’d asked you at the start of 2020 what the most responded to event on Facebook this term would be, you likely would have said Kings’ Affair or The Hawks’ Event. I’m doubtful anyone would have said ‘a virtual version of Eurovision’. However, in these strange and uncertain times – with Easter Term out the window – over 2000 in our midst have shown interest on Cambrovision’s page. I caught up with Tom McGachie, to find out what the man behind it all thought of the event’s wild success and why it is so important to celebrate this global phenomenon, in spite of its cancellation.

‘I had no clue it would be as popular as it is, I thought I’d get max 100 people, all of which would be my own friends who would click “going” just to indulge me.’ However, the event caught the eye of Camfess who shared it on their page and, as you’d expect, Tom’s “random idea” was seen by thousands of students. Does he feel excited by its success? Or nervous about being thrust into the spotlight? ‘A little bit. I used to love Eurovision when I was at school but it was seen as a weird thing to enjoy, (his friends) watched it but weren’t that engaged with it. So, I felt if not now, when. This is the perfect opportunity to put myself out there.’

The whole concept has been incredibly well received online with very little, if any negative backlash coming Tom’s way. He explains, ‘I’m sure some people find the notifications annoying, but if people don’t like it they don’t have to watch it, they can click off the page.’ Rightly so, his aim for the event was to give people in our community – many of whom are struggling to keep their spirits up at home – something to make them laugh and be positive about.

To begin with it was all just a passing idea, after hearing Eurovision was not going ahead for the first time in its history. ‘I thought I should do some contingency plan, an online poll, but there are so many out there that have been around for years. ‘I thought it would be nice to do something a bit more Cambridge-centric. As we’d all been sent home, it was another way of engaging with the Cambridge community because you can still have a connection with Cambridge even when you’re not there. Even if you’re not a Eurovision fan, you can just tell your friends how much you hate a song or that you think it’s a bit of a joke. It’s some entertainment.’

Currently he is uploading a song every day to the discussion thread, using the Eurovision Song Contest’s official YouTube channel to source the videos. The stage design, costumes and overall production are largely lost without the element of live performance, but by using the official videos he feels he’s giving each country an unbiased representation as these videos are nations’ own submissions for upload.

‘That does sometimes mean that you have a disjunction because some countries official videos are their national final performance, singing live, which give you a flavour of what it might have been like on stage, where as other songs might be submitted as fully fledged music videos, which are edited, maybe auto tuned. Often the official videos can be very popular, but then they perform it live and that performance drops significantly among rankings.’ That said, his system does seem the best it can be given the circumstances. Once every video is up ‘there will be a two-week grace period; have a look through songs you enjoyed, and then voting will open for the first semi-final.’ 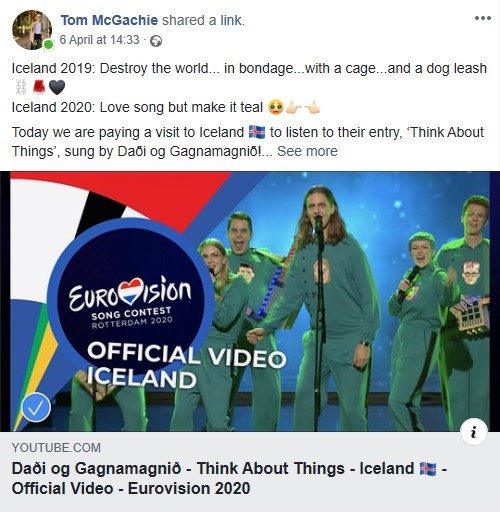 Pretty sure I’ve seen this outfit around Sidgewick Site once or twice.

‘Eurovision can bring out some weird content, some very out- there stuff, but it deserves credit for showcasing difference and diversity, be that linguistic diversity or sexual and gender identity diversity.’ Looking back through previous contestants and winners, there is a variety of gender identity, expression and sexuality. Conchita Wurst’s win in 2014 is an often- cited example of this, but the first openly gay contestant was in 1997 and the first transgender singer – Dana International – won in 1998.

Eurovision also showcases a wide variety of culture and linguistic diversity as Tom mentioned. Contestants are not obligated to sing in English, nor does the music have to conform to any specific style. Performers can show off elements of their home country in staging, costumes or lyrics. This open-mindedness, carried over from the original competition is what makes Cambrovision such a good vehicle for connection when we are all apart; it is inherently non-exclusionary. Anyone is welcome to enjoy and participate in the discussion, wherever they are from or whoever they are.

In Britain, despite our lack of success with the contest it still has a cult following and is commentated on by none other than national treasure himself: Graham Norton. ‘The UK has a very strange relationship with Eurovision, we almost love to hate it and we seem to love the fact that we do badly. I think the UK sends songs that musically, there is nothing wrong with them, the singers are very talented, but they fail to do well on the Eurovision stage because they are very British centric songs. I feel like some of them might do well in the British charts, but on the Eurovision stage you’re catering to millions of people’s very wide and diverse tastes, and we don’t seem to be able to appeal to them.’

Unfortunately, the odds are not in our favour. Since 2003, the UK has finished outside the Top 20 on ten occasions, last winning in 1997 with Katrina and the Waves’ ‘Love, Shine a Light’. Last year’s entrant got a measly 11 points. So, 23 years without a win under our belt, why on earth haven’t we figured out how to pull it out the bag? Simply put: ‘We don’t make the effort required to win Eurovision and therefore we don’t win.’ 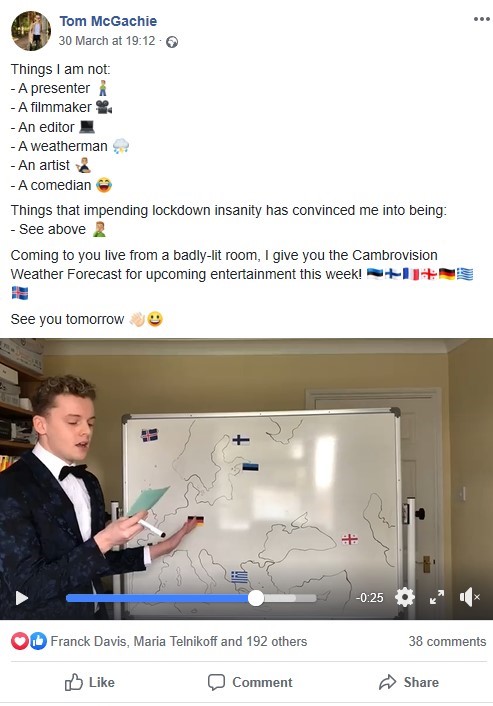 Tom updating us on what to expect this week.

However, there is also a massive cost associated with actually hosting, as all winning nations do the year after their win. ‘The UK probably does not have that desire to host; we don’t need the touristy showcase. The BBC might not be against hosting Eurovision, but it’s not top of the agenda.’ Tom makes a great point, behind the extravagance of the show, lies a shrewd cost-benefit analysis and only a year of planning time, instead of the four years of the Olympics or the Euros. As a member of ‘The Big Five’ – the five nations who donate the most money to the European Broadcasting Union – the United Kingdom already pumps a pretty large sum of money into the competition every year.

What about in terms of Cambrovision? Has anyone received strong reviews so far and has this been vastly different from the names just mentioned? ‘We will have to wait and see, despite being an international environment it’s still a bubble. The tastes of Cambridge students are very different to Europe as a whole, so I think that will change up the way the voting plays out. I think there will be a lot of modern music that will be more popular. Ballads which usually go high up the list in Europe, might not appeal to a student audience who find it tiring or boring.’

Tom’s enthusiasm for Cambrovision and Eurovision as a whole came across throughout our interview and I’d say we are in safe hands with him as host. To anyone not currently following the page I recommend you do. If you’re a long-time fan then it’s the place to vent your opinions, if you’ve never watched it before this is the perfect introduction and if you love to hate it just scroll through and enjoy some of the weirder performances. At the end of the day, we need to stay connected and this is one very unorthodox yet light-hearted way to do it.