Faces of Cambridge: Why has it taken a pandemic for the Government to address the homelessness crisis?

Having a roof over your head is a basic human right

A little over a week ago, after promising £3.2 million of funding to help the homeless during the coronavirus pandemic, the Government urged local authorities to house all rough sleepers in the coming weeks. Even before this announcement, on the 24th of March, Cambridge City council announced plans to offer accommodation to every such individual in the city, by working with hotels, housing associations, B&Bs, and local landlords. 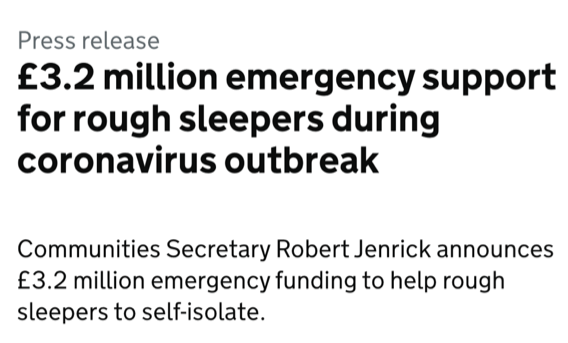 This move should undoubtedly be welcomed. The homeless are among the most vulnerable when it comes to the spread of diseases like coronavirus, since many rough sleepers suffer from pre-existing health conditions which leave them at an increased risk of becoming seriously ill. Moreover, social isolation rules mean there is much less footfall in city centres. Although this is certainly the right move in terms of public health, it has had a huge impact on the incomes of rough sleepers, many of whom rely on the contributions of the public. Many charities which distribute food and drinks to individuals on the streets have also significantly cut back their activities. Hopefully, the funding will allow rough sleepers to be housed and food provided in a time when they usually face increased problems finding housing as winter shelters close for the summer.

Yet although it is fantastic that the Government is taking action, these measures do not fully address the difficulties homeless people face as a result of the pandemic. It is easy to assume that all those under the label of ‘homeless’ are living on the streets, but actually, the picture is more nuanced. As of September 2019, there were 699 families living in emergency accommodation in Cambridgeshire. Many of these families are living in hostels and accommodation with shared bathrooms and kitchens, which will potentially expose many of them to the virus. If they do develop symptoms, the cramped conditions of the rooms in which these families will have to isolate – with some even sharing beds and having little to no access to outdoor space – will be detrimental to their quality of life.

This reveals how the COVID-19 pandemic is a class issue. For some of us, quarantine will involve a sequestered couple of months in the garden with a good book and an ample store cupboard; for others, the reality is much starker. It is not clear if the funding given to councils is sufficient to guarantee that the accommodation provided for rough sleepers will be safe, allowing them to comply with government social distancing advice. Nor have local authorities yet announced plans to ensure the safety of families presently in emergency accommodation.

Moreover, several charities have pointed out that individuals who have lost their incomes due to coronavirus-related closures may soon be forced to sleep rough, as they run out of money for housing. Polly Neate, the chief executive of Shelter, has voiced concerns about the strain that this will put on emergency accommodation when local authorities seek to house this additional cohort. Describing the current situation as a ‘pressure cooker of need’, she has urged the government to address the causes of homelessness, such as the precarious zero-hour contracts which leave people living hand-to-mouth, rather than relying on an already overburdened emergency accommodation network to deal with the consequences.

Lee, a local Big Issue vendor, commented on the present situation for Cambridge’s homeless community: “From the info I have received, all the rough sleepers have been housed and the local street outreach team have been giving them food daily. I am very happy this has been done and hopefully they will all get housed permanently. Most of my fellow vendors and other members of the homeless community I know have major health issues so I hope after this crisis we can look at how we look after the homeless. I believe it’s a human rights violation for the UK to allow anyone to be homeless and by housing every here, they have proved it can be done!”

Subscribe to the Big Issue here to support local vendors who are really struggling in the current crisis, as they are no longer able to sell copies on the street. Copies are also being sold in Sainsbury’s. 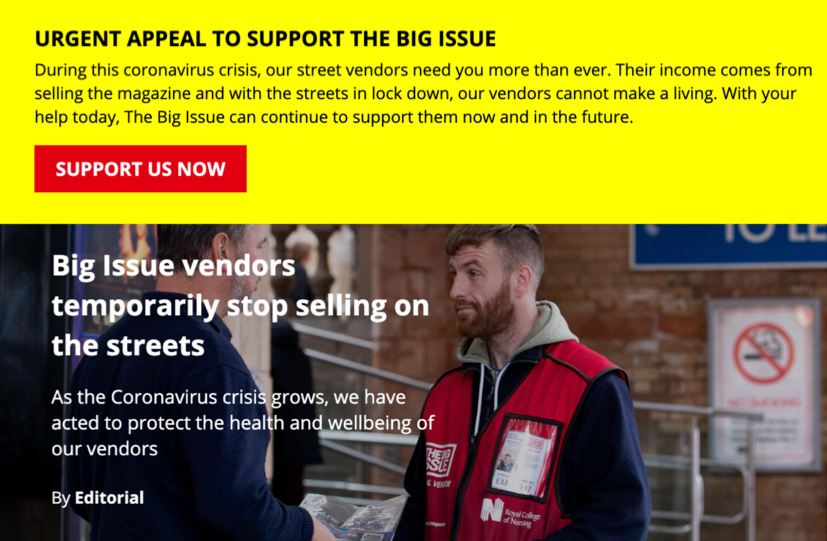 Lee’s comment reveals the doubt around what will happen to these homeless individuals after the threat of coronavirus has faded. When the worst has passed, it is feared that national and local government will lose the motivation to provide housing, and the homeless community will once again be neglected. Similar concerns have been raised by charities. Hannah Gousy, the head of Policy and Campaigns at Crisis, wrote that she hoped we would “…all take the time to learn lessons and take note so that during more ordinary times work is stepped up to end homelessness for the thousands of people who lose their home every year, more often than not because they lose their job or become sick.”

This leads me to question why the government is only acting now. If the measures are driven by a genuine concern for the safety of homeless individuals, why hasn’t more been done previously to help the scores of rough sleepers with pre-existing health problems? And this could be taken even further; if the authorities are able to come up with a quick solution in a time of crisis, why can’t they work to formulate a more permanent solution so that no individual has to live without a roof over his or her head? COVID-19 is a crisis, but so is homelessness, and it should be treated with the same level of urgency. Shelter should be seen as a basic and assumed human right, as it is in other parts of Europe, such as Scandinavia, where numbers of rough sleepers is far lower than in the UK.

It may well be that the present crisis has forced the government to realise the vulnerable position of rough sleepers, and this will spur them to take the issue of homeless more seriously in the future. However, it is also possible that Whitehall’s latest measures are only directed at stemming the spread of disease, rather than specifically aiming to safeguard the health of individual rough sleepers. Time will tell.

As previous articles in the Faces of Cambridge series have shown, the homeless are consistently dehumanised by local authorities, treated as an anonymous mass to be managed. I do wonder whether the current policies are just yet another reiteration of this. Regardless of the motivations of ministers, I do believe that their response shows that ‘where there’s a will there’s a way’. We should, in the coming months, maintain pressure on the government to ensure that tackling homelessness remains a top priority, and that the current efforts to end homelessness prove more lasting than the crisis which provoked them.

‘Self-love, warmth and community’ – sounds like my cup of tea

New Year, New Podcast? YCA is back and better than ever

We need YOU to submit your questions and worries!

‘Why exactly do colleges make asking for genuine help such a painful process?’

How to survive a lockdown in Cambridge: From someone who has done it before

Not to boast, but as it’s my third lockdown in Cambridge you might say I’m a bit of an expert

What’s on at the Cambridge Union this (virtual) Lent term: Joe Wicks, Clare Balding and more!

Ever dreamed of living the Bake-Off experience vicariously through Clare Balding?

All the Cambridge news you missed over the vacation

The programme will be offered to 100 students free of charge

It’s time to move on from predicted grades

How to recreate a Mainsbury’s Trip from Home

‘This is our crisis of mismanagement’: The Tab talks to SolidariTee

Meet the students behind the charity which helps refugees access legal aid, one t-shirt at a time

Five unexplainable pictures of Matt Hancock you can’t ever unsee

Our Health Secretary clearly understands the value of sport, leisure and… going down a children’s slide?

In the words of the queen that is Ariana Grande: ‘got me tripping, falling with no safety net’

Lent term is online and Cambridge students are not happy

10 ways to pretend you’re still in Cambridge this term

Stuck at home and missing Cambridge? We’ve got you!

Someone needs to say it: Cambridge’s return policy has been utterly horrific

“The complete disregard for our mental health has been staggering”

Mental health and no internet are ‘permitted reasons’ to return to Cambridge, Toope confirms

Clearly a number of colleges didn’t get this memo x

WHO ALLOWED THIS MOVIE TO HAPPEN

May the best woman win

‘It’s offensive’: Students on why pronouncing their names properly is a big deal

Obviously you can’t own anything from IKEA

Anna Shay is worth $600million

Amber and Amy have also commented on the claims

Ok fine, these are the 15 best four lads memes going around

I have seen their faces more than I’ve seen my family, and I’m fine with that

I love them all already ❤️

All the Cambridge news you missed over the vacation

How to recreate a Mainsbury’s Trip from Home

What’s on at the Cambridge Union this (virtual) Lent term: Joe Wicks, Clare Balding and more!

Lent term is online and Cambridge students are not happy