Does copyright mean anything nowadays? Apparently not. Shameless parodying aside, Director Kit Livsey’s sketch show has worked its magic on me. Standout performances from the likes of Libby Thornton and Producer Sophia Marshall set a high standard that was, at times, difficult to match–but the whole cast is to be congratulated nonetheless for an ultimately enjoyable, light-hearted evening of puns, innuendos and the occasional pop culture cross-over.

Staged at Pembroke New Cellars, Riddikulus was very much a ‘no frills’ affair. Its simple staging enabled smooth transitions from one sketch to another, while remixes from the original soundtrack of the inspiration for this show plunged the audience into a comically warped version of Hogwarts. The tech team trio’s dance moves to these tunes were particularly worthy of note, albeit distracting at times. 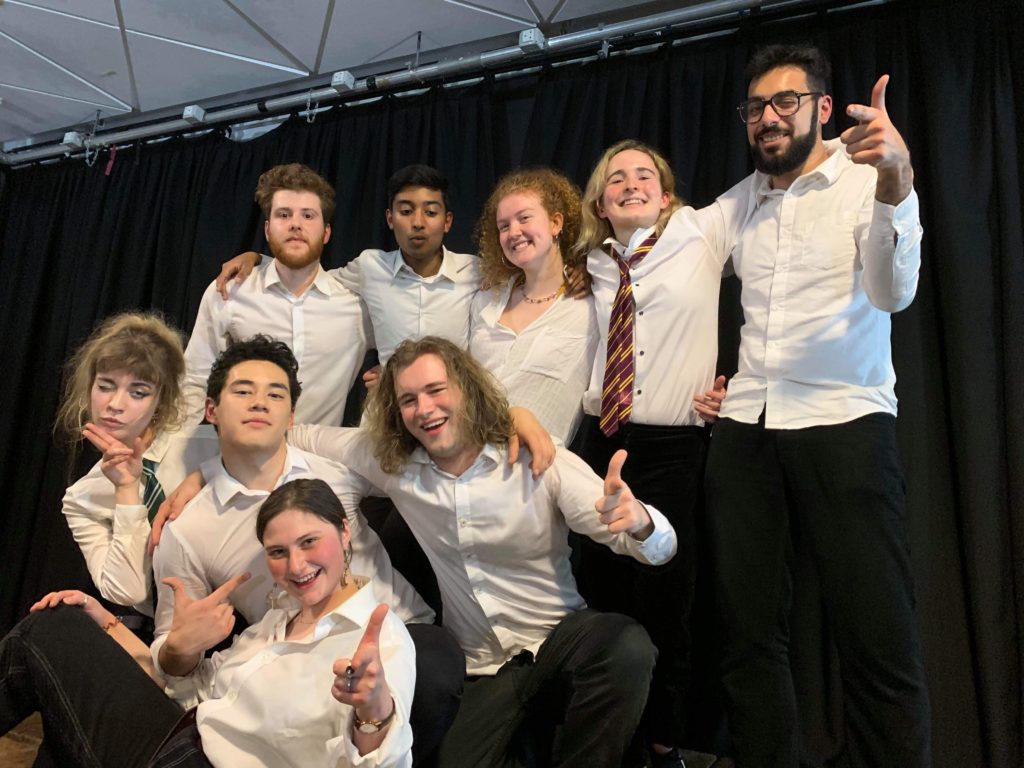 Opening with an almost Glee-esque performance, the cast set a precedent for the rest of the show, as Joe Ross-Biddles’ strikingly familiar “Barry Clotter” and pals took to the stage, among whom were various seasoned members of the Cambridge theatre scene. Producer & Stage Manager Muhammad Manji’s shrill impression of Parvati Patil certainly foreshadowed the tongue in cheek critique of J.K. Rowling that would feature more than once or twice over the course of the show.

What followed was a series of various sketches that often heavily relied on the audience’s assumed pre-existing knowledge of the Potter universe, the majority of which were clever, well-executed, and performed with both enthusiasm and a high level of acting ability. Particular highlights included a foul-mouthed and incisively malicious anthropomorphic mandrake, played by Marshall, as well as Thornton’s dopey-yet-woke Neville Longbottom.

Thornton showed an impressive range and commitment to her varying roles throughout the show and certainly made up for the shortcomings of her fellow cast members in scenes that did not quite land as well as hoped. Similarly, Ross-Biddles’ unconventional and quirky interpretations of his roles, including a Dementor detective and the Dark Lord himself, were a real pleasure to watch. As an MMLer, his use of the ‘Dónde está la biblioteca’ hex was very much appreciated. A later sketch featuring Chloe Stark as a disgruntled chain-smoking owl fed up with her job delivering Hogwarts letters was another highlight that epitomised the humour of this show. 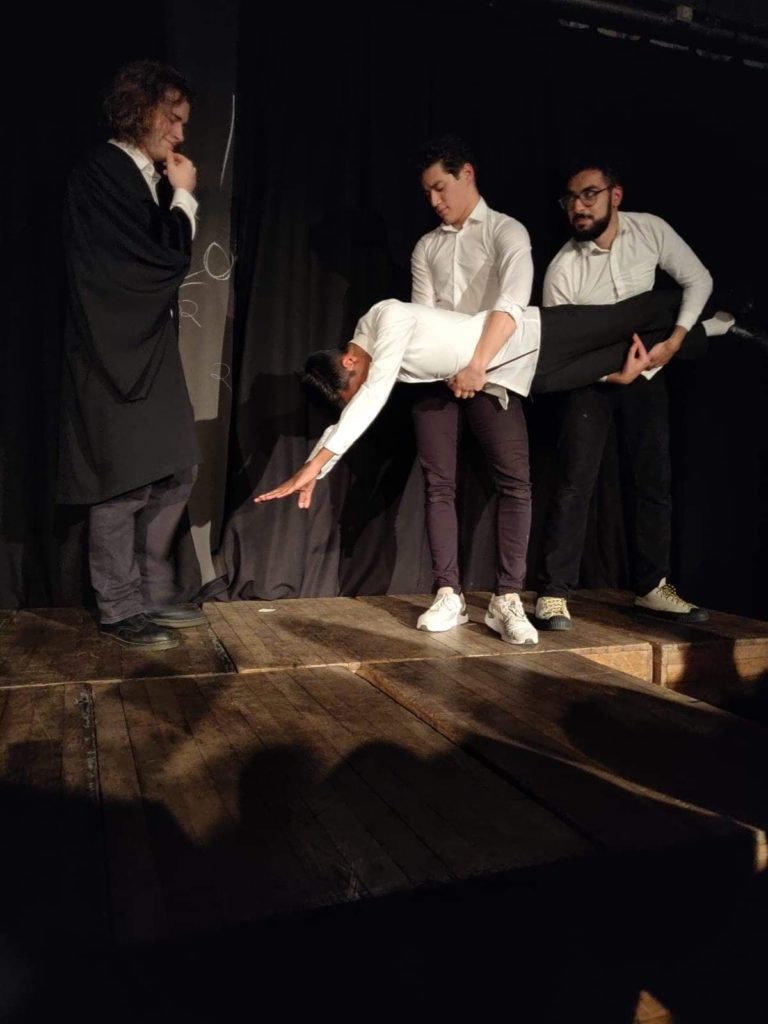 Sexual chemistry was rife on stage to say the least. Associate Director Matt Davies and Director Kit Livsey’s homoerotic portrayal of Dumbledore and Grindelwald’s relationship was just the surface of numerous hilarious fanfiction-inspired sketches. Davies went on to reprise a plethora of highly-sexualised roles, including a very literal interpretation of Moaning Myrtle (whose name perhaps speaks for itself), as well as a harness-bound toy boy. In the words of Minerva McGonagall, he appears to have a ‘particular proclivity’ for bondage.

The remainder of the cast consisted of Clancy Peiris Jr., Associate Director Ayush Prasad and Pieter Durman, who also put in strong performances. Their portrayals of a camp Death Eater, a woe-is-me Bilbo Baggins, and a raunchy Professor McGonagall respectively showed a lot of potential and creativity. Despite the occasional lapse in humour and acting quality, these brief awkward moments were soon forgotten and generally did not inhibit the show overall.

Equally, there were absolutely no qualms about pushing the boundaries of political correctness. The show provided various satirical social commentaries on Brexit, The Conservative Party, Racism, Islamophobia, Classism, and the Climate Crisis. Not always well-received by the audience, these ever-so-Cambridge commentaries showed a depth to the show that I personally admired and felt made the show very relevant, especially given the allusion to the SU Lent Elections that occurred that same evening. Manji is to be particularly commended for his sharp interlacing of comedy with brutally honest and poignant criticisms of institutional racism within British politics. 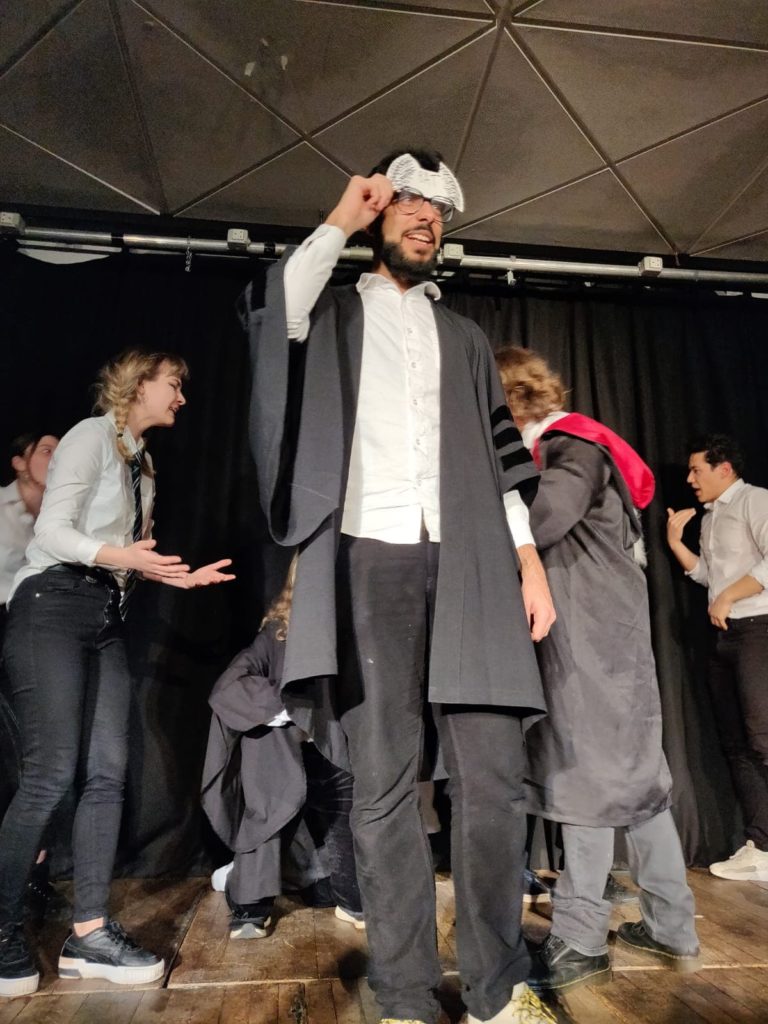 Overall, Riddikulus has more than proven to me why it received enough praise to merit an encore performance, even in spite of Emily Moss and Sophie Stemmons’ unfortunate absence in the encore show. Did it make me laugh? Not all the time. But what it did do was thrive on its own style of awkward humour, with an intelligent and nuanced use of the source material throughout. It is no wonder that the show was sold out for all 3 performances. The issues that arose are easily rectifiable, and with time I look forward to seeing these actors/comedians grow and refine their craft. For now, all I can say is good luck with your imminent copyright lawsuit!