They blocked the traffic lights at the crossroads and were chanting songs and harassing drivers with a loudspeaker. A blockade remains in place on Trumpington Road, intersecting with the Fen Causeway. 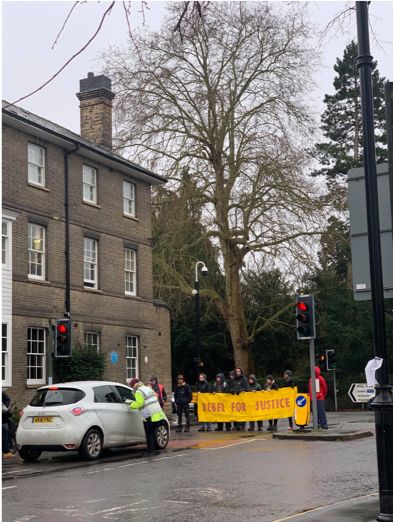 Today is the International day of Social Justice, so XR have chosen to focus on the issue of inequality. According to a statement made to Cambridgeshire Live, XR protesters' aim today is to 'join together to collectively challenge the injustices we face.'

When approached for a comment by the Cambridge Tab, Extinction Rebellion Cambridge said:

"It was a swarming action as part of our campaign of escalation against the city and county authorities and to keep our demands for Cambridge University to cut ties with fossil fuel companies, a citizens' assembly for the city to decide climate policy and a clean transport network at county level, in the spotlight."

Extinction Rebellion have been causing disruption around Cambridge since Sunday.

They began with road blocks over the weekend. On Monday, they shocked the public by digging up the lawn outside Trinity College before taking the dirt to Barclays Bank on St Andrew's Street and dumping it in the foyer, a "symbolic act".

Tuesday saw them cause chaos at the Schlumberger centre, an oil drilling and fracking research facility, by gluing and chaining themselves to the building. On Wednesday, campaigners disrupted a Greater Cambridge Partnership (GCP) meeting.

Extinction Rebellion are seeking to push Cambridge University towards fully divesting from fossil fuel companies and for the Council to invest in a more green, energy-based public transport system.

Stay tuned for more updates on the XR protests