This year's Clark Lecture, an annual English lecture hosted at Trinity College, has been left without a speaker as Arundhati Roy has pulled out prior to the lecture on the 13th February.

Roy is author of 'The God of Small Things', which won the Booker prize in 1997. She has since become politically active, campaigning against India's nuclear policies and for an independent Kashmir amongst other human rights causes. She is also a strong critic of US actions in Afghanistan.

The lecture is delivered annually by a distinguished academic in the field of English literature, with poet Alice Oswald, winner of the 2002 T. S. Eliot Prize, giving the lecture in 2017. Last year's lecture was delivered by Professor Andrew Cole from Princeton University, where he directs the Gauss Seminars in Criticism.

Cambridge UCU contacted Roy after the lecture was announced to inform her of the boycott, after which she withdrew from giving the lecture. She was due to give a talk titled 'The Graveyard Talks Back'. Trinity has since removed the event from Facebook and their website. 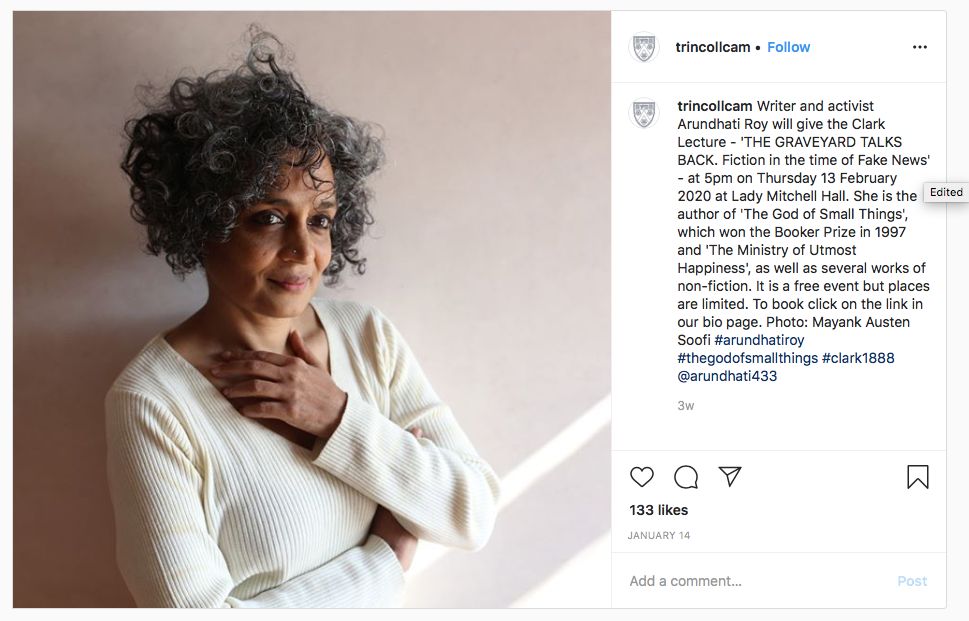 Trinity College is currently being boycotted by UCU (University and College Union) after their fellows voted against reconsidering the decision of their College Council to exit the national pensions scheme, called the Universities Superannuation Scheme (USS).

Trinity leaving the scheme has resulted in it being weakened. If one more strong employer chooses to leave the scheme, its financial capacity will be downgraded from "strong" to "tending to strong". This would jeopardise the pensions of thousands of academics who contribute to the scheme nationally.

As a result of the exit, 3 College fellows resigned, with many more academics in Cambridge refusing to supervise Trinity students. However, the college has claimed it is unable to re-enter the scheme now it has left.

Cambridge UCU have expressed gratitude for Roy's actions, saying in their statement:

"We are deeply grateful to her for this act of solidarity, and the support she has expressed for our ongoing dispute with the college. If Trinity thinks it can draw a line under its disgraceful conduct, it should think again. We will not forget the college's decision to pull out of the pension scheme; nor will we forgive the selfish and reckless reasoning for which it did so, without thought for the university staff here and elsewhere who rely on the scheme for their livelihood. Arundhati's withdrawal may just bring home to Trinity how far it has jeopardised its own reputation for learning and scholarship."

"It is a greatly generous act of deep solidarity for which she has our deepest thanks. Trinity is going to have to learn an unfamiliar lesson– money can't buy everything, least of all integrity. Not everything can be 'left-washed', not all alliances broken by wealth & power."

‘We’re not vandals, we’re not thugs, we don’t do this kind of stuff for no reason’