Fourteen days of strike action in February and March announced

UCU (University and College Union) have announced more strikes this term, starting from the 20th February. There will be escalating strike action each week until a full strike on the week of the 9th of March. This extends past the last week of the Cambridge Lent term so will not impact Cambridge students to the same extent as students at other universities.

The previous strike mandate from last term is still valid, so UCU have not needed to re-ballot members in Cambridge. The mandate expires in April.

BREAKING NEWS: UCU members at 74 universities to take 14 days of strikes in February and March. Union says it will also ballot for a fresh mandate to continue the action if disputes on #USS and #FourFights cannot be resolved. Full details here – https://t.co/GTf5MRPPlR

The exact dates of the strike are:

As with the strikes in Michaelmas this does not mean that all lectures will be cancelled, with some department staff choosing to continue to hold lectures and not participate in the strike.

They have voted for industrial action on the basis of pension and pay cuts. Academics are set to lose £240,000 each on average as a result of the pension changes. Meanwhile, the pay of academic staff has seen a 20% drop in pay in real terms over the last ten years. 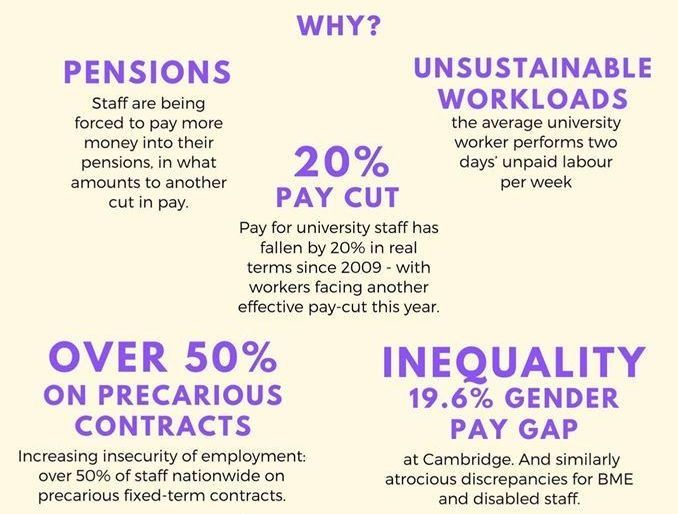 'We have seen more members back strikes since the winter walkouts and this next wave of action will affect even more universities and students. If universities want to avoid further disruption they need to deal with rising pension costs, and address the problems over pay and conditions.

'We have been clear from the outset that we would take serious and sustained industrial action if that was what was needed. As well as the strikes next month, we are going to ballot members to ensure that we have a fresh mandate for further action to cover the rest of the academic year if these disputes are not resolved.'

A brief history of everything tragic James Arthur has ever done

Remember when he was dropped for being a homophobe lmaoooo