Port and Policy is an event run by CUCA, in which attendees pay £8 for the delight of unlimited port and debate. They typically run three of these per term.

At this event, they also debated "This House Would Scrap the BBC Licence Fee" and "This House Supports a Nuclear Iran". 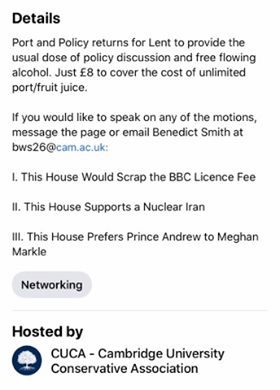 Prince Andrew has courted controversy recently for his close relationship with Jeffrey Epstein, a convicted sex offender. Prince Andrew has denied ever suspecting Epstein was involved in such activities. He has since stepped down from royal duties, as well as from his patronages and his role as Chancellor of the University of Huddersfield.

There are numerous allegations of sex claims against Prince Andrew also. He has denied the allegations, refuting the allegation from Virginia Giuffre by claiming he was at a Pizza Express. He has also been accused of groping a woman's breast.

Meghan Markle has been the target of significant amount of racism since marrying Prince Harry. This has been both in the media and online, to the extent that British MP's wrote a letter describing the coverage as having "colonial undertones". Harry and Meghan have since taken a break from being senior royals and are seeking financial independence.

CUCA have a history of being inflammatory, inviting speakers from the right of the Conservative party, including Jacob Rees-Mogg and Godfrey Bloom.

The Prince Andrew debate was the last debate of the evening, with one attendee saying "most people weren't sober after the 2nd motion".

Kiss and tell: The Jacob Rees-Snogg Off