Room points: everything you never knew you wanted to know

What exactly are room points?

Room points are Peterhouse’s bizarre room balloting system. Basically the number of points you get determines your order in the ballot. There are two types of room points; academic points are the most like scholar’s ballots but instead of differentiating between a first and everything else, they differentiate between all grades, so a 2:1 gets you more points than a 2:2 as well.

The other part, which is especially controversial, are the non-academic points. Basically every extra-curricular thing you do in Cambridge gets you a certain number of points and the aim is to get as many as possible if you want a good spot on the room ballot. As an example volunteering for two hours a week for one term gets you 3 points, doing a two hour long access event gets you 1 point and writing this article gets me 0.5 points.

Because the system requires this year’s exam results to work we don’t actually pick our rooms until August, after some confusing equation has been done to work out how many points we each get.

Don't even try and explain this equation to me

Who decides how many points you get?

In a way it is all of us. Each year we have an open meeting where anybody can submit changes to the room points system in the standing orders and then everyone who goes to the meeting votes on it. So if you thought being a Memebridge admin deserved room points as a form of social media outreach you could propose that. You wouldn’t get it, because Memebridge is shit now, but you could try.

In reality though, ultimate power lies with the room point president and their committee. The committee is made up of anonymous finalists, chosen by the outgoing JCR president and they check everybody’s claims using the standing orders as a guideline, but if they think you’ve been greedy about points they will not hesitate to let you know. Occasionally they hand out more points than you asked for but that depends on how nice the president is.

Why would you want this weird system?

The idea behind it is basically that if people from Peterhouse didn’t have an incentive to do sports and societies we might not and then the college would not have any clubs for people to join because it is too small for lukewarm participation. So by convincing people to play football by giving them a points-based incentive it means there is a college football team for the people who would have played football anyway. It’s meant to ensure we don’t just think about exams and have an enriching extracurricular life as well.

Our system is arguably fairer than a chance based system, or one that only takes academics into consideration, as it means you have a chance to get a good room even if you excel at something other than exams, or based on luck alone. It’s essentially quite Soviet in nature, but it keeps the communal spirit and meritocracy while omitting the genocidal atrocities and corruption.

If the JCR voted to get rid of room points it is widely thought we would have an academic-only system forced on us by governing body, which might be worse as it would place more pressure on students to focus only on exams. 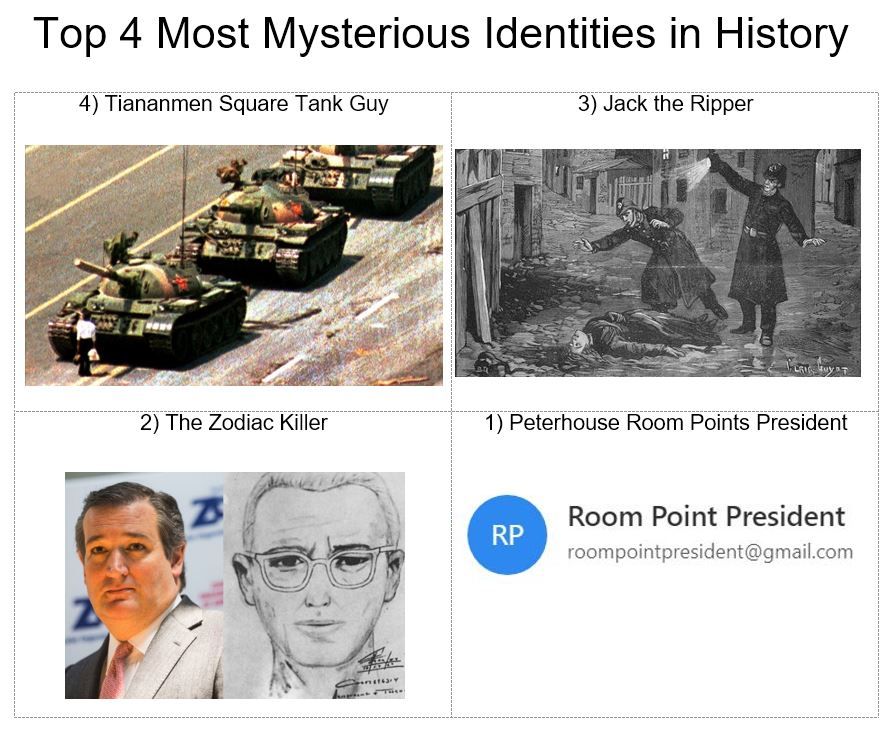 Um, duh. It would probably be hard to have any system that everyone likes. But room points are a controversial system because a lot of people don’t like that it creates extra pressure in various ways. Firstly you want to do well on your exams to get a good room, but doing well on your exams isn’t really enough to be near the top of the ballot as you need to have found time to fit in various extracurriculars to claim points for as well.

For some people, especially scientists, just doing your degree is hard enough without pressure to do activities as well. If a student needs a certain type of room for medical reasons, they are taken off the ballot and allocated an appropriate room, so disabled students don’t have to worry as much but the system doesn’t really account for invisible disabilities that may prevent people from accumulating as many points, so is potentially a bit ableist. The counter-argument to this is that as all rooms are very close to college, nobody is that disadvantaged by a low position on the ballot, and college have safety nets in place for if the last rooms are too expensive, so you don’t have to worry about room points at all unless you feel like it.

As valid as these criticisms are, whenever the JCR has voted on the issue, they have voted to keep room points in place. I have mixed feelings, because the system is clearly flawed. Even beyond the potential welfare issues with the system, it isn’t actually very fair in other ways as it rewards lots of little commitments more than bigger commitments (so if I did 7 hours worth of access events I would get 7 points, and for choir I get 7 for the whole year even though that is 7 hours or more a week). Hopefully, by holding the system accountable each year in the open meeting and changing it, we are making it as fair as it can possibly be.

To me, it certainly seems better than a system that only rewards people who get firsts, like most scholar’s ballots do. What is Peterhouse.