The struggle of standing out

Since beginning my degree, there’s something about going back home or visiting my friends at other universities that always strikes me with a small sense of dread.

In fact, it began even earlier than that, when I first received my offer to study at Cambridge. People would inevitably ask me about my future plans, and I’d tell them I was planning to do a degree. But I always secretly hoped they wouldn’t ask me the next question – where I was studying. It got to the point where sometimes I’d even lie and tell people I was planning on going to Exeter, my insurance choice. I know what you’re thinking – wasn’t that just because you’re wildly insecure and were certain you’d miss your offer (We’ve all been there)? But there was a deeper reason as well.

For myself, and many others I’ve spoken to, mentioning the C-word (get your mind out of the gutter) can seem to come with a sort of instant judgement and hostility.

An example of this is the comment most Cambridge students hear daily – “wow, you must be so smart!” Of course, the last thing I want to do is seem ungrateful for such praise, and I’m sure many love the prestige that comes with announcing their university. But when such comments are followed up with wistful remarks from co-workers about how I’m smarter than they’ll ever be, and how they were always useless at school, such comments can quickly stop being friendly and start to seem envious and depressing.

I always make sure to voice my disapproval of this attitude, since my being here is as much about me being lucky enough to be raised in a stable environment, and to receive certain academic opportunities, as it is about my intelligence. But this can often come across as insincere. 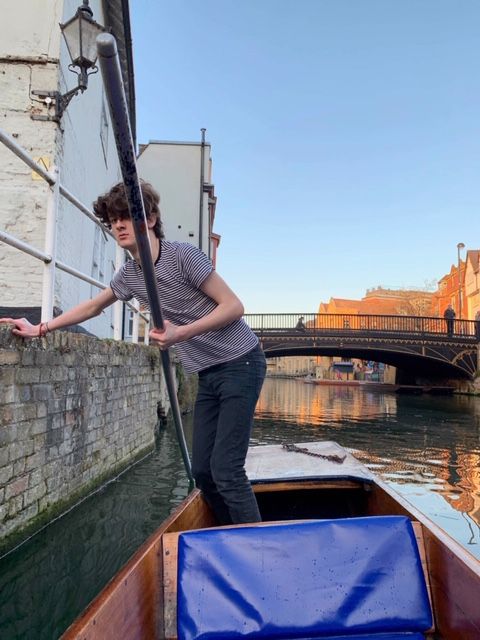 A Cambridge genius who lacks a basic understanding of direction

Being seen as the smartest person in the room, who studies at some far-off prestigious place, can be especially hard when the people you’re surrounded by back home never really had a chance to progress, due to their social class, location, and countless other factors. It can make being home feel alienating, as you stick out like a sore thumb the minute university is bought up.

Recently, I’ve even started jokingly referring to myself to new people as “the dumbest bitch in Cambridge” (which there may be some truth to tbh), just to make myself seem more normal in the eyes of others and dispel the idea that I’m some sort of super-genius who studies twelve hours a day and only stops to learn Mandarin or practice the Viola.

I was made painfully aware of another preconception about students at this university when I was told by someone I’d just met that I was ‘too posh for them’ when I dropped the C bomb. Now, I’ve never felt like my life is an impoverished sob story by any stretch, but being from a low income area, a working class family, and a state-comprehensive school, it irritated me that this stranger would assume something like that based purely on my university. It was as if the moment I arrived at the gates of Emmanuel College I had been instantly transformed into a stuck-up middle-class yacht-owning Tory in the eyes of others.

Of course, I don’t want to suggest that being seen as smart, or a bit fancy, for studying here is some horrific, unbearable social injustice. But these ideas– that we’re too smart for certain people, or too posh – can create a sense of isolation when outside of the Cambridge bubble. To some extent, this might be a universal experience for students here. Studying at an institution with such historical influence, and which is consistently ranked among the best universities in the world, is bound to set you apart in the eyes of others.

But this is heightened when coming from a working-class background. For many students, studying here is seen as a natural step after they leave their elite private school, and their social life is filled with family members and peers who’ve attended this place and understand their experiences, or at least know others who have. Being from a poorer area with especially low progression to higher education, it’s no wonder myself, and others in similar situations, stand out as different back home. For working-class students surrounded by working class people, studying at Oxbridge is unique and abnormal, since for many people we meet they are perceived as mythical and unattainable places they wouldn’t have even dreamt of aspiring to.

The people who hold these views, therefore, can hardly be blamed, since it stems from Oxbridge’s reputation as somewhere that working-class people not only can’t reach, but don’t belong. But after already fighting an uphill battle to prove you belong in the Cambridge environment, it can be disheartening to have to do the exact same thing back home.

Sadly, this stigma will not be overcome until we no longer live in a society where studying at Cambridge is seen as a norm for some, and an unreachable place for others.

(All images in this article belong to the author)