Selwyn College, via its official Facebook page, has confirmed that it has sold all its direct shareholdings in the fossil fuel sector as part of their long-term policy of divestment.

This decision, taken by their investment committee, was approved yesterday by the college council and marks a significant victory in the well-publicised divestment campaign, launched in 2015 by the Zero Carbon Society, which aims to make the whole university "fossil free." 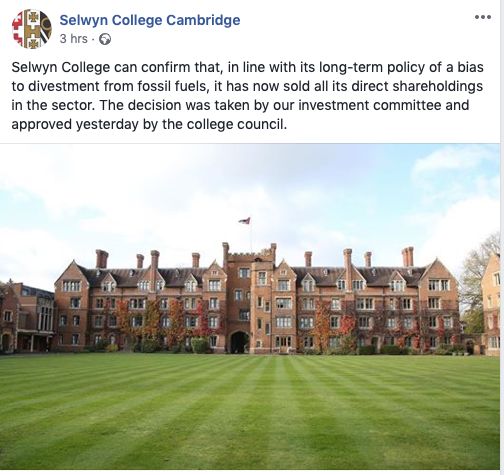 Campaigners, however, are tempering their praise of Selwyn College with further calls for them to sell their indirect shares as well. One student commented on their Facebook post: "Now go further and commit to full divestment from direct AND indirect holdings!"

A college spokesperson told The Tab:

"Selwyn has had a policy of divesting from fossil fuels for some time – recognising the concerns that college members and others have about climate change. We have to balance that with the obligation as charitable trustees to manage our investments in the financial interests of the college, but this felt like an appropriate time to sell our shares in Shell – and we are investing in renewable energy instead. Selwyn now does not hold any direct investments in fossil fuels. We also have a wider ethical investment policy so we do not put money into areas such as arms or tobacco."

This marks a significant step towards university-wide divestment. It has sparked hopes that other colleges will be following in Selwyn's much reduced carbon footprint!