Yesterday around 300 students marched through the streets of Cambridge to protest the investments that the university has in both arms companies and fossil fuels. Run by Cambridge Zero Carbon Society, Demilitarise Cambridge and others it was another show of student anger at the university's current links.

Students met at senate house at 12:30 before doing a circuit of the town centre. They marched along King's Parade, up Pembroke Street and down St Andrews Street before making their way to Senate House.

The march was energetic and hard to miss. They shouted simple chants such as 'Divest. Disarm. Decolonise' and 'Hey. Ho. Fossil Fuels have got to go' whilst people banged on drums and on saucepans. At a busy time of year for Cambridge it caused a lot of disruption holding up both pedestrian and vehicle traffic. 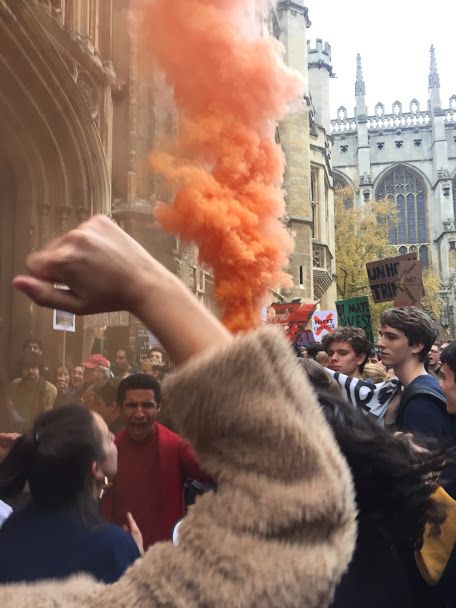 Energetic chants and dancing occurring outside the doors of senate house

Once at senate house the students stopped to hear speeches made by other students about the exact demands and wishes of the groups presents. They expressed their dissatisfaction with the use of money from these companies to fund research and teaching. There was a lot of anger about the University being complicit in the horrors committed directly and indirectly by these companies around the world.

When the protesters left Senate House at around 2pm one of the leaders commented that by them leaving it did not mean the fight from students was over. Indeed with chants such as 'I believe that we will win' that message was more than clear.

It will be interesting to see in the coming year how divestment as an issue is discussed in Cambridge as more marches like this are likely to take place and the anger of students does not seem to be subsiding. Especially as the university and individual colleges only seem to be knuckling down in defence of their investments rather than having a conversation about removing them.