The figures come to light following an FOI request by the Financial Times, and reveal the low success and application rates made by black students.

At Downing College, only 8-12 applications from black students were successful (over the five year period), out of a total of 95 applications. This leaves black applicants at Downing with an 8.4 per cent – 12 per cent success rate, which is less than half of the university average, which stood at 21 per cent in 2017.

Oxford has also been criticised for its low intake of black students, after an FOI request by MP David Lammy in 2015 showed that 10/32 Oxford colleges accepted no black students in 2015.

In a statement, Cambridge University said that the success rate stood at a 'record high', as BME (not specifically black students) acceptances were 22 per cent of all offers made in 2017. A university spokesperson also noted the continued investment made in Target Oxbridge, which supports black students through the application process, through which 46 black students have achieved offers at Cambridge since 2012.

The university also said that it would not be able to improve diversity on its own, ad that to do so would require "the support of schools and parents."

Last year, a post made by the Cambridge Afro-Caribbean Society, in which the 15 black, male undergraduates accepted to Cambridge took a photograph in Trinity College, went viral. 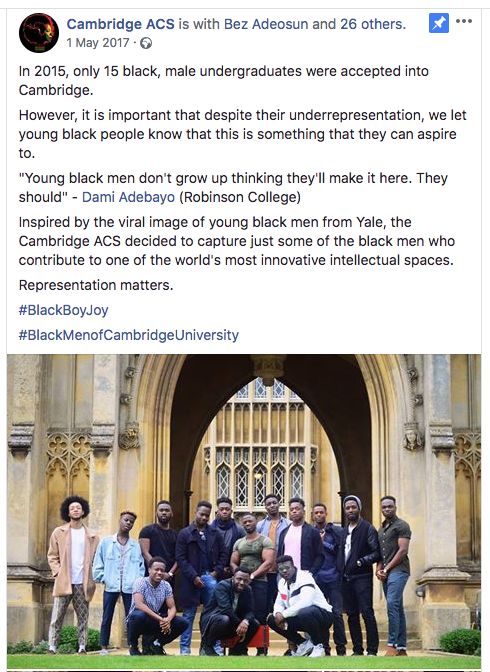 The caption included a quotation from ACS member Dami Adebayo, who urged his peers to apply to Cambridge: "Young black men don't grow up thinking they'll make it here. They should."

Whilst there are signs that change is happening, it is clear that there's still some way to go.

How to ‘actually’ make a quarter-zip look nice

Since there isn’t an item of clothing that Cambridge loves to see more, here’s how to make sure you’re wearing it right