The Grudgebridge saga continues and each new month brings new drama for us to dissect and analyse. The recent spate of happenings comes from the fact that the Grudgebridge site has once again been taken down.

According to its creator it is due to the fact that it had recently become a 'witch-hunt' after the Facebook page had launched a vendetta against Cambridge drinking societies.

Yet, dear readers this is not the first time that the site has been taken down, after accusations arose that the site was the equivalent of cyber-bullying as well as being a 'toxic space'. 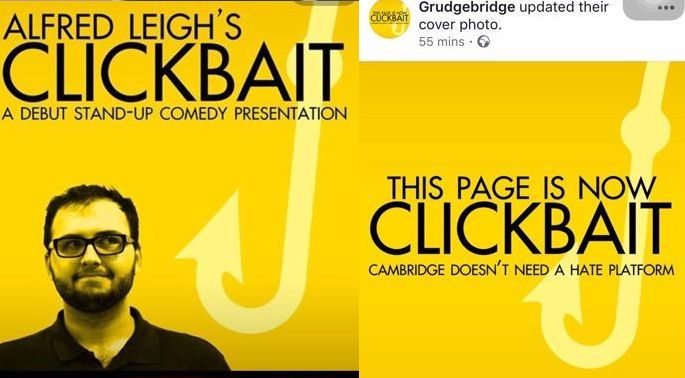 Am I seeing double?

But the plot thickens… The page was then used as a promotion for the show 'Clickbait' by one of the page's managers, Alfred Leigh. Described as a 'Debut Stand-up comedy presentation', Mr Leigh has taken advantage of the page shutting down to publicise his flourishing comedic career.

Leigh soon, however, removed the promotional material – perhaps realising that it did not suit a page that had most recently been used to accuse others of sexual harassment, drink-spiking, and elitism. He edited his original post, saying "I have since changed the display picture as I understood it was inflammatory and of poor taste – I apologise for this"

Will it ever die?

Following the now-recognisable pattern of what happens when Grudgebridge is deleted, the secondary Grudgebridge Facebook page has become active – already targeting Leigh.

So within one day Grudgebridge had gone from vigilante justice to stand-up self-promotion to a current non entity, and a new page has been re-established. Whatever next?