Revealed: The toxicity of the class conversation in Cambridge

A university divided by culture?

We’ve had over 900 responses to our survey on class and privilege at Cambridge.

And rather than condemning Cambridge itself as posh and elitist, respondents overwhelmingly pointed to everyday student discourse being divisive and prejudiced – and more harmful than any impressions less-privileged students could take from May Balls and black tie culture.

Presumptions of privilege, mockery and micro-aggressions were all highlighted as part of the harmful conversation, with some citing anxieties about class culture as being fundamental to their experiences of mental health problems.

The image painted by mainstream media was also heavily criticised, with 82% saying this had led to their being judged by friends and family at home. The nuances of privilege and the fluid nature of class identity markers were thought to be especially neglected by media outlets, precisely for the complexity of the issue. 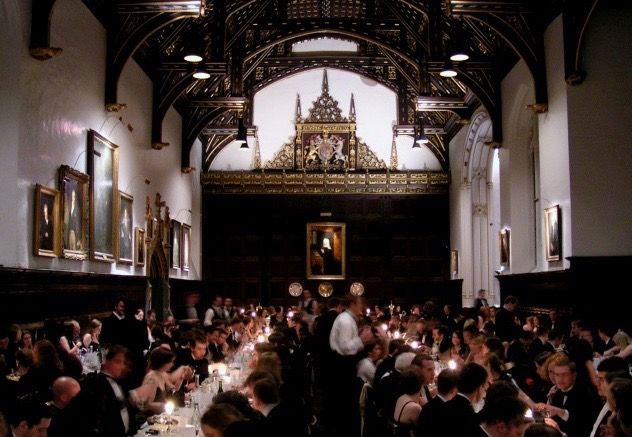 Not all bad news: Only 24% of respondents felt that 'black tie' culture of formals and May Balls was representative of their Cambridge experience.

What did we ask students?

Firstly, we asked students what type of school they went to (since this aspect of someone’s background is given so much attention by the media) and then the extent to which they agreed with certain opinions on class and privilege. Most of these statements can be found in comment articles by student and national media outlets.

All this had the aim of falsely heightening respondents’ consciousness of education as the single marker of class identity. And although 60% agreed that the admissions process is geared more favourably towards those from privileged educational backgrounds, respondents’ took to the additional comments section to outline their individual circumstances. 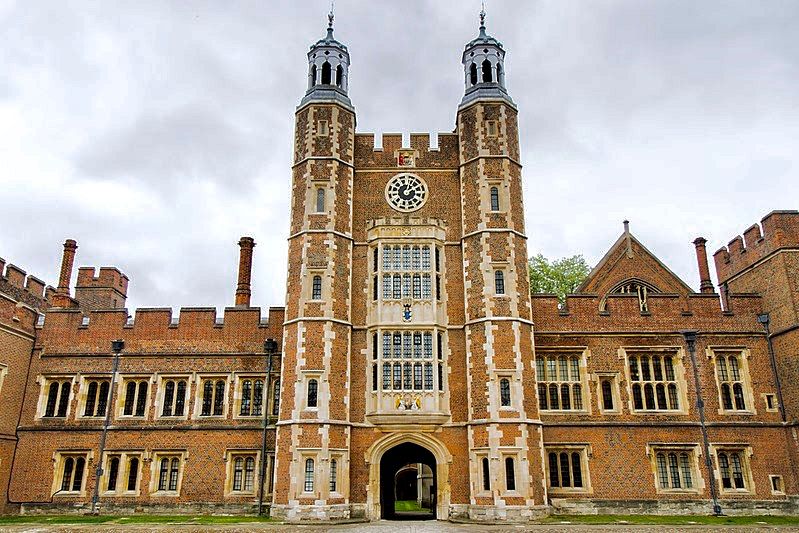 ‘Private school does not always mean an elite education, working class does not mean first in the family to go to university, and speaking with RP does not mean you’re posh.’

Everyone everyone who identified as ‘upper class’ in our survey attended a private school, as opposed to only 11 of the 92 identifying as ‘working class’ – but numbers can be deceiving, and such figures neglect the multifaceted nature of class identity. 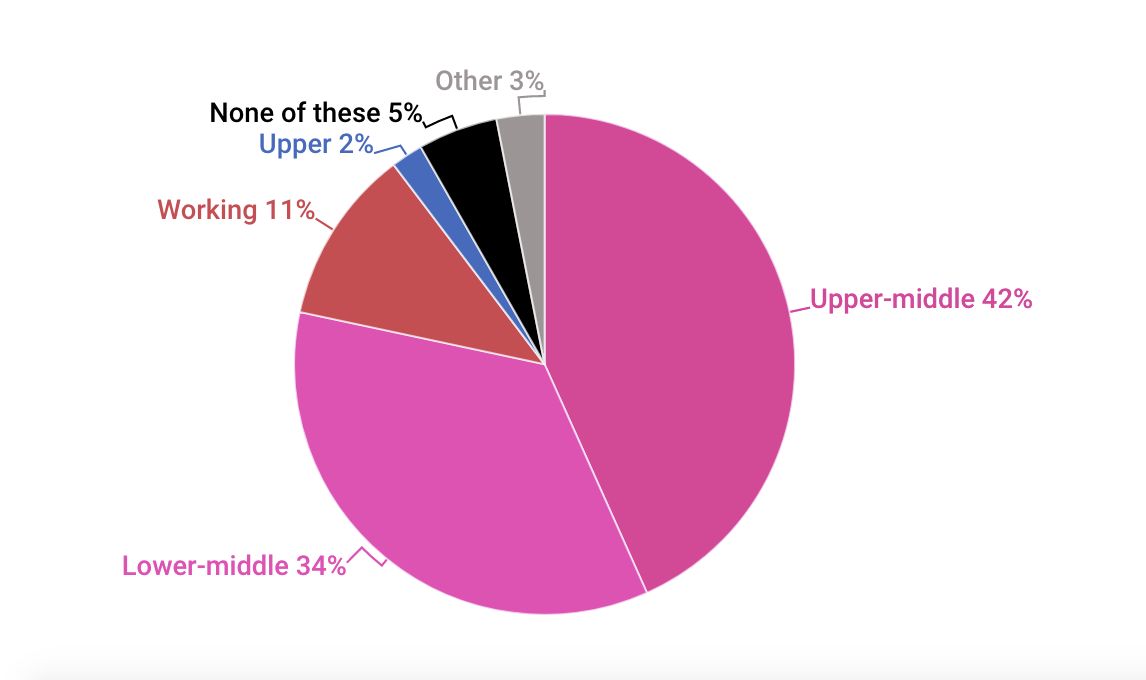 Many expressed the idea that schooling obscures other factors, and linked this to having presumptions of privilege put upon them by others.

‘I went to a thoroughly shit private school, and come from a lower-middle class teaching family in industrial Yorkshire. I had both academic and music scholarships. Despite this, I get attacked so much in Cambridge, and my political voice is circumscribed by my peers who think I can’t be left-wing because I went to private school.’

Comrades can't be private-schooled, can they?

‘I went to grammar school but come from a single-parent family, and this makes my class a grey area. People make assumptions about me because of my RP accent which aren't indicative of my financial status.’

‘I am a care leaver from a very working class background with unemployed parents – I grew up on a council estate. Because I went to a grammar school people assume I am middle-class/privileged and I feel very invalidated by that.’

Prejudice – from all angles

As well as the conflation of private education with family privilege, class prejudice is seen to pervade deeper. Classist attitudes within Cambridge and presumptions of ‘poshness’ from friends and family at home were all highlighted by respondents – 82% agreed that people at home made presumptions about their privilege if they know they go to Cambridge.

‘When I go home, everyone assumes I've become a posh person – and when I'm here, I'm obviously not. I don’t fully fit in anywhere anymore, and the gap between me and people at home just keeps widening – even with family.’

‘People [outside of Cambridge] seem to think that someone being here means that they automatically open themselves up for criticism.’

54% of respondents said they had been laughed at because of their class whilst at Cambridge.

The same seems to apply to attitudes within Cambridge.

‘When people find out I went to a private school they immediately start making fun of it, despite this clearly being completely unacceptable if it were the other way around.’

Regional accents were consistently highlighted as a mark of being different to the perceived Cambridge stereotype, and from multiple perspectives. While speaking with received pronunciation (standard British English, usually southern) is seen as a sign of privilege, students with regional accents, particularly from Essex and the North, said they felt judged. 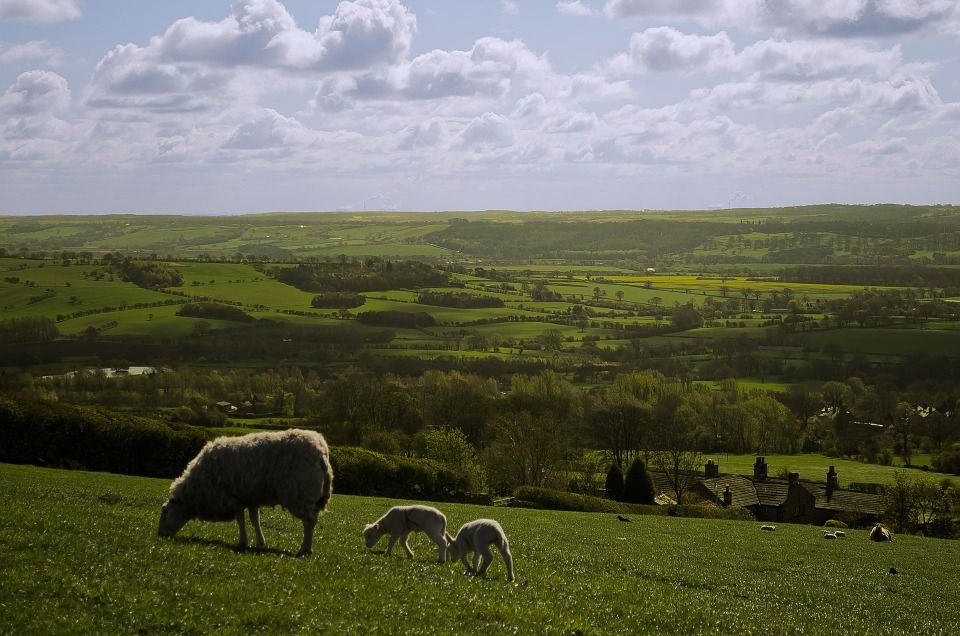 'So-called ‘harmless jokes’ are often aimed at people who sound ‘other’. My regional Northern accent is mimicked by people I’ve never met, before I can get a sentence out. I reached the point of consulting my DoS as to whether I should take elocution lessons, or at least put some effort into losing my accent – thankfully, she said an emphatic, “No”.’

‘Please stop mocking my accent, it's micro-aggression and really not ok.'

‘I’m from a state comprehensive from the North, and feel constantly anxious that I’m the odd one out. People don’t take me seriously because of my accent, and being JCR President has been tougher because of this when the majority of my predecessors have been middle class and privately educated.’ 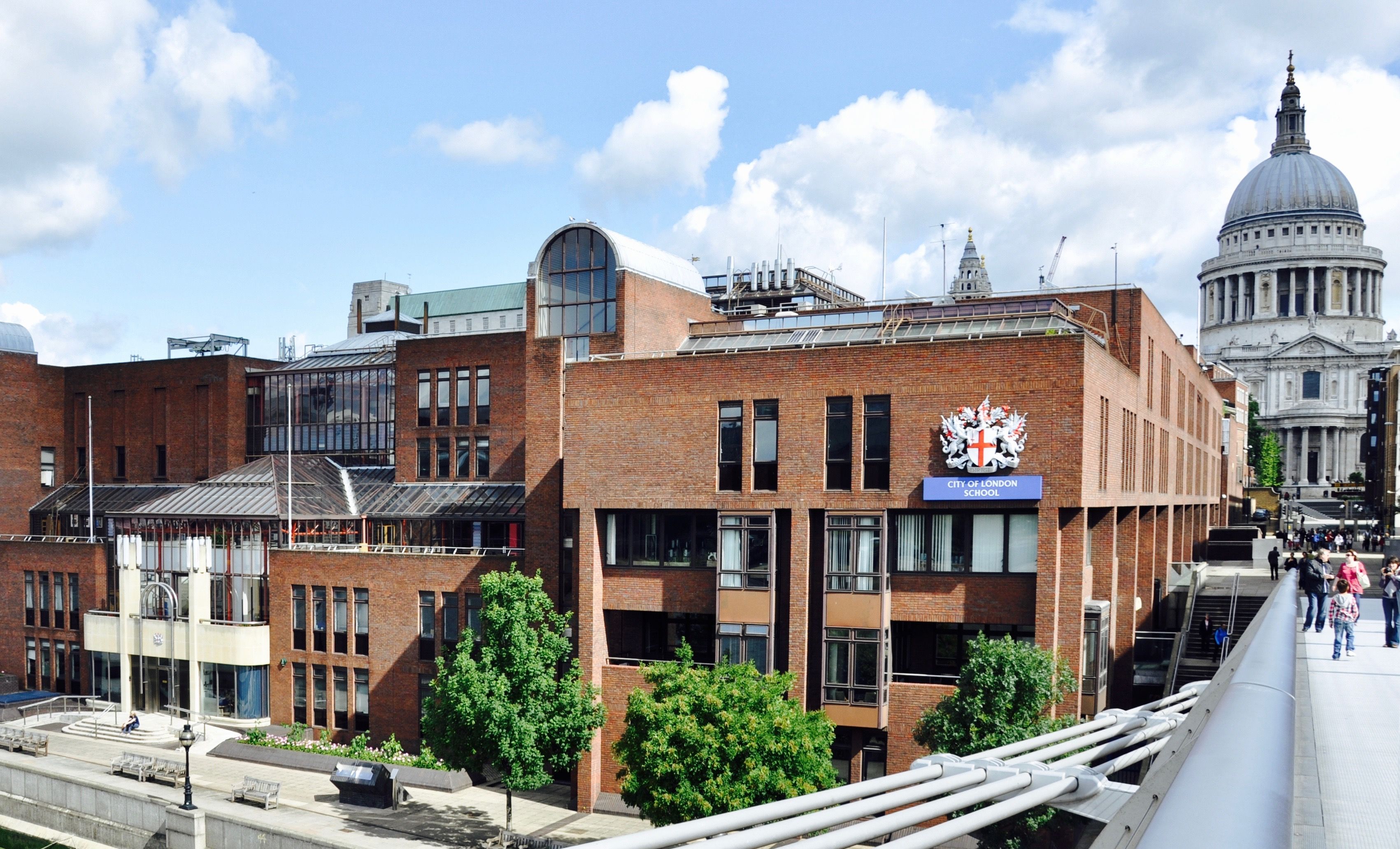 The City of London school, where annual fees are nearly £17,000

It is worth emphasising at this point that the notion of class in Cambridge seems to be a concern predominantly of British students – however obvious this may seem.

‘Coming from the Republic of Ireland, it was quite a culture shock entering such a class-obsessed environment. Whilst this can be said of all of the UK I feel at a place of privilege such as Cambridge, class seems to be an issue which pervades everyday life. I believe that those who look down on working class people and regional accents are very much in the minority here, but a more subtle ignorance is widespread.’

‘I am from Eastern Europe and think that this whole thing is just ridiculous. This whole class divide is just non-existent – I read about it but never see or experience it.’

Many respondents brought up the idea of Cambridge being a place where middle class culture is the norm, with 79% agreeing that Cambridge is a ‘thoroughly middle class place’.

‘Middle class lifestyle is completely normalised here. Travelling, skiing, and going to opera are seen as normal, in a way that can be alienating. There is an assumption that you can afford to eat out every week, or buy a May Ball ticket.’

‘The micro-aggressions add up and make things difficult – it's being called out for not owning a dress shirt when you've had to borrow your black tie from a friend for every May Ball, it's the anxiety of dating someone middle class and never feeling comfortable around them and their middle class circle, it's your supervisor dismissing your answer because you said it in a regional accent.' 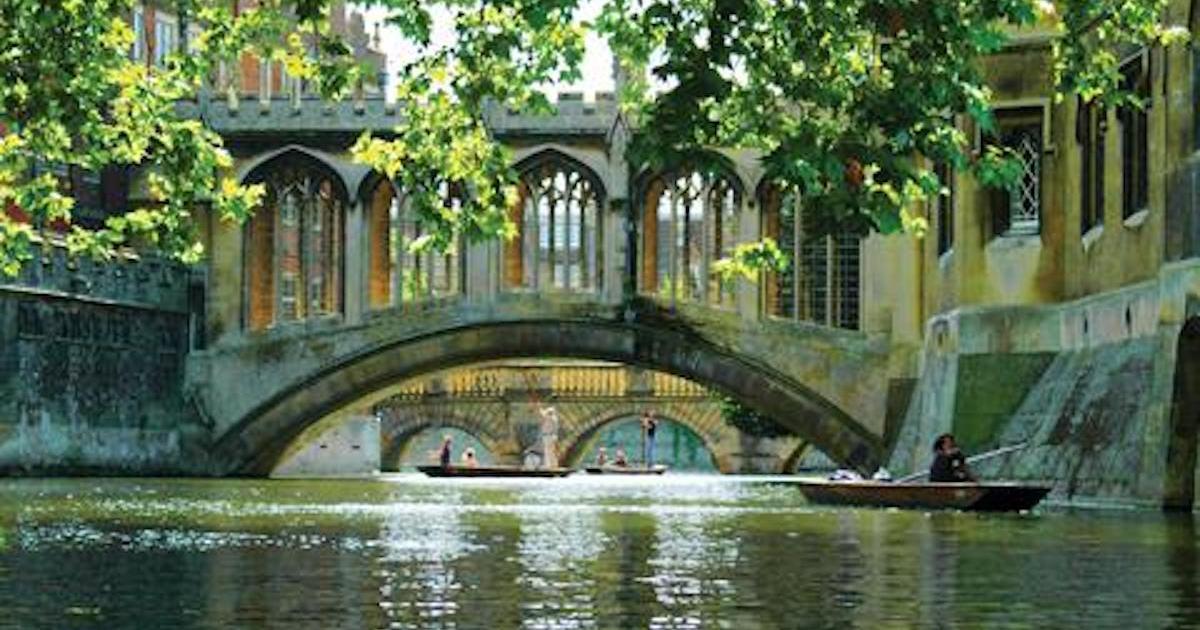 The added complexity enters when considering the issue of the appropriation of working class culture by the middle class, which was considered offensive and culturally divisive by 45% of respondents.

‘Being working class at Cambridge is just undeniably difficult. It is isolating, it is often upsetting, and it takes so much effort to wade through frustrations and micro-aggressions. Middle class students often simultaneously covet and condemn working class culture.’

And finally… some positive accounts

It’s important to make clear that not all responses in our survey were negative. And although we should always bear in mind that the experience of an individual is not necessarily representative of the wider picture, some respondents brought up interesting points which add to the complexity of this discussion.

‘Class and privilege have always been awkward topics for me as a black student from one of the most exclusive private schools in the country. As such, race is an important factor to consider as well. I'm fully aware that my North London middle class accent and private school network of friends has shielded me from many aspects of racism at this university. So in that sense, my experience of class and privilege has been great here!’ 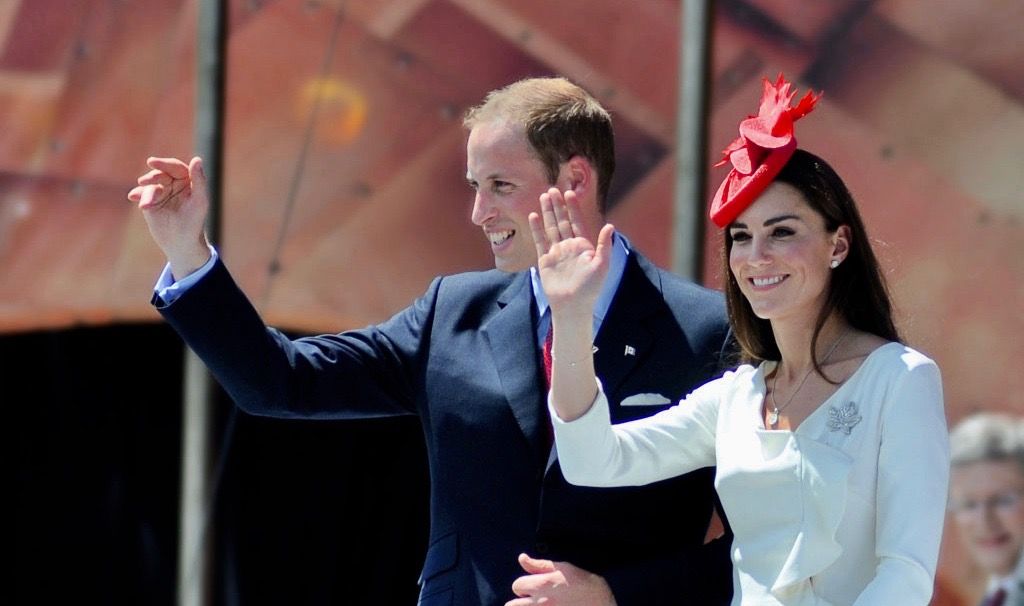 ‘As a working class student I actively wanted to experience the whole May Ball and black tie thing, as I had never had that sort of opportunity before. It’s really not too expensive, especially when you consider that those from less privileged backgrounds get a full maintenance loan and £3500 from the Cambridge Bursary. I've actually profited from coming here…’

‘I have Etonian friends here and friends who were the only students to go to Oxbridge from their school for years. All of them have smashed it here.’