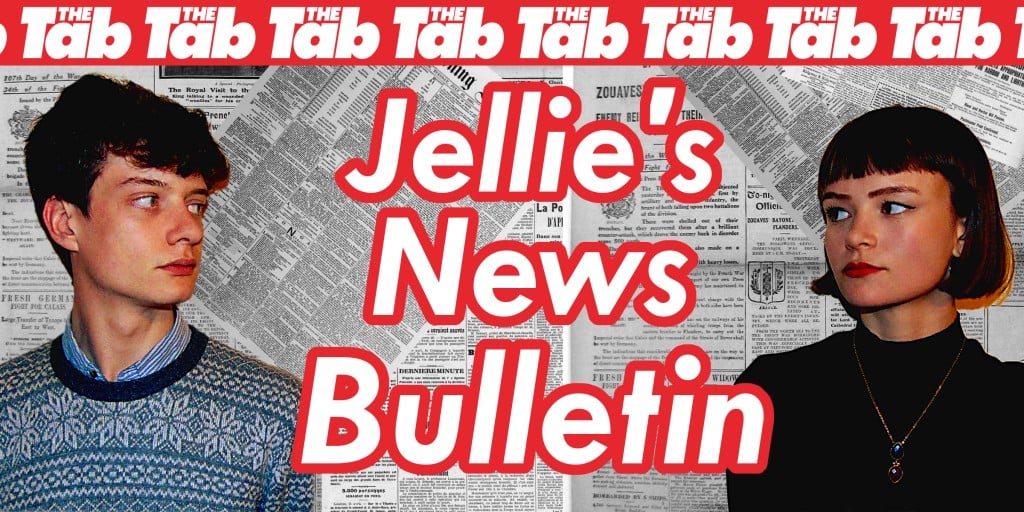 Week three has been somewhat apocalyptic, with WWII bombs being unearthed at Cambridge station, the Queens’ banks of the Cam spontaneously sinking into the river and undergraduates being attacked in Market Square. In addition to this, Zero Carbon protesters marched in an all-black procession through town – the twelve horsemen of the apocalypse perhaps.

To escape the carnage, some students set about swindling free flights, trains, coaches and ferries to get as far away from Cambridge as possible. The Tab teamed up with RAG Jailbreak for a liveblog in what has, once again, been hugely successful, with students reportedly fleeing as far away as South America and Eastern Asia.

After a long and gruelling battle between Oriel College and a group of students demanding that a statue of the colonialist Cecil Rhodes must fall, Oriel has finally confirmed the Rhodes will not fall. A report in the Telegraph marks the end of the media frenzy, with academics including professor Mary Beard condemning it as a “completely barking” plan to “erase” history. Jellie feels that it is a shame after all of this ideological discussion, it has finally come down to pressure from college donors.

102-year-old Brian Lowe, a retired lawyer, has become the oldest Cantab to graduate with a masters. Lowe, who graduated in his South Wales care home, says he simply wanted “to complete my CV”. Congratulations Brian. 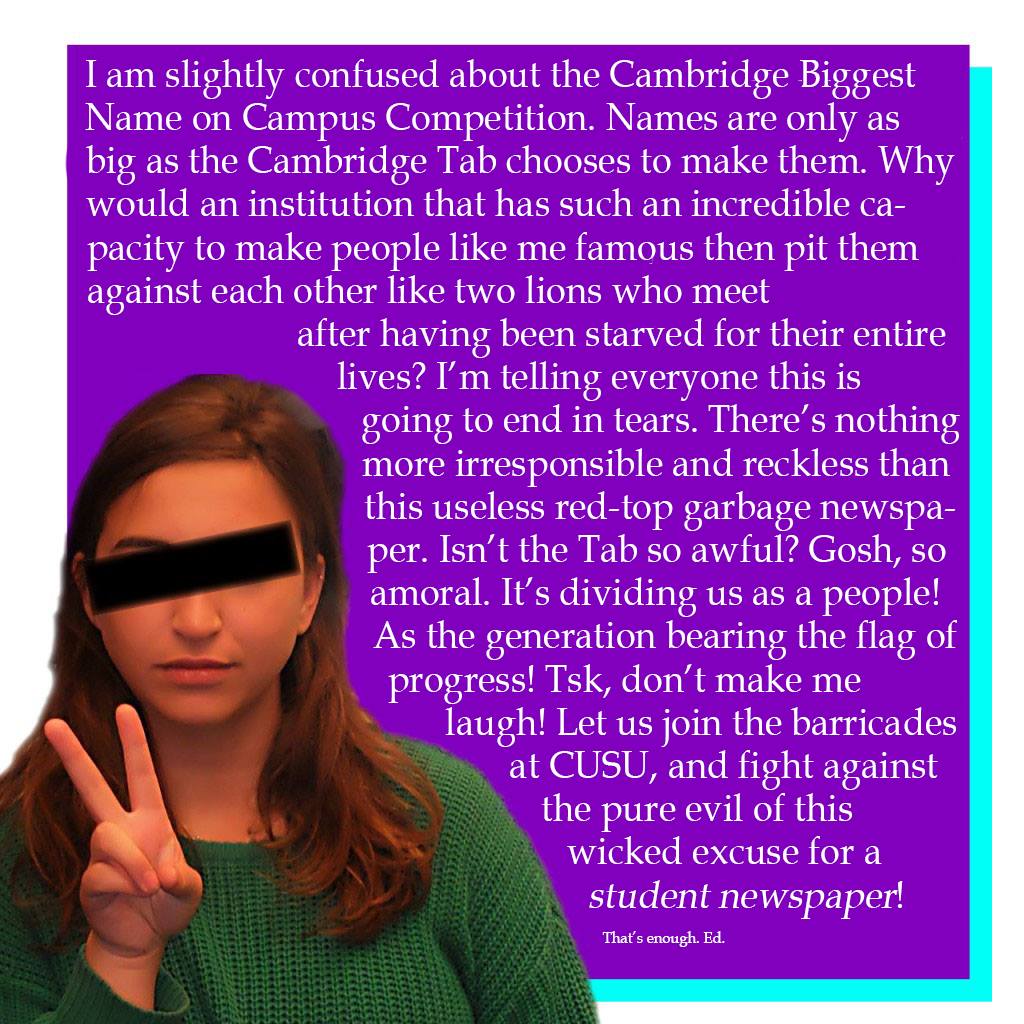 The Christian Union is launching a campaign next week called #NoFilterCambidge, which aims to “present life without the filter… the social media trend ‘#nofilter’ centres on the desire to see things how they really are, for authenticity, for the truth. We invite you to explore the filters that surround us in the world and who we are as individuals – to see life, and the life Jesus offers, without the filter.” Profound.

Jellie can’t help but notice that, for a movement called #NoFilterCambridge, they use quite a few filters on their pictures. 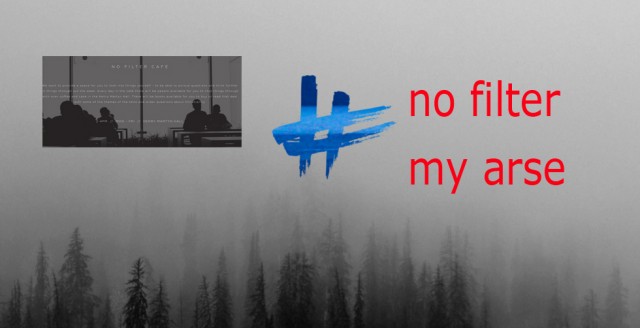 In a video on their website, #NoFilterCambridge include images of people playing the organ, browsing Facebook, swiping left on Tinder, couples holding hands (and nothing more), clubbing and shotting vodka. Down with the kidz.

Also, you may want to turn off volume before watching – the music is an acquired taste.

A comment piece in Varsity this week espoused the benefits of going vegan. Advice to students considering going vegan include 1) eat lots 2) keeping it intersectional 3) don’t preach about your veganism.

The author changed from their optimistic tune, applauding the benefits of veganism, to add that taking milk from cows “is nothing short of rape”.

Meanwhile, TCS published an ever so slightly creepy “Student Chat” piece, asking “Which animal is the sexiest?” Apparently Sloths’ “confidence is mesmerising”. Think you might be alone on that one, Lydia. 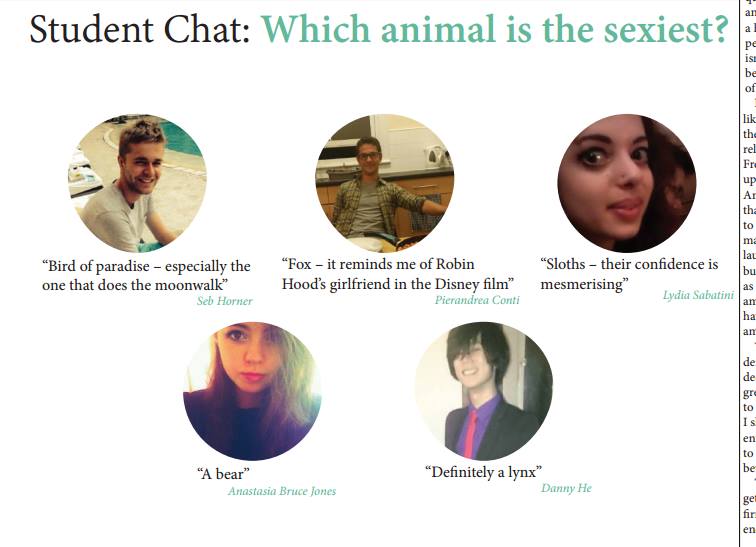 Exactly the kind of hard-hitting questions one should expect from Cambridge’s “most dynamic weekly student newspaper”. College Facebook groups are usually full of useless information, endless spam from Union hacks and the occasional post about a lost key. This is sometimes interrupted by the occasional piece of #drama.

The Pembroke group has seen a desperate plea from a student seeking the return of their SEVEN LITRES of vodka. We cannot help but feel sympathy for the student, who is sadly now £90 poorer with nothing to show for it (apart from a less ferocious hangover).

Trinity students were enjoying a nice sit-down dinner in their formal hall, soaking in the grandeur of their surrounding, smugly congratulating themselves on being admitted to Cambridge’s most prestigious college, when their sensitive temperaments were upset.

The catering staff at Trinity had brought out Horseradish to accompany the fruit salad desert, mistaking the spicy condiment for cream. Yum. 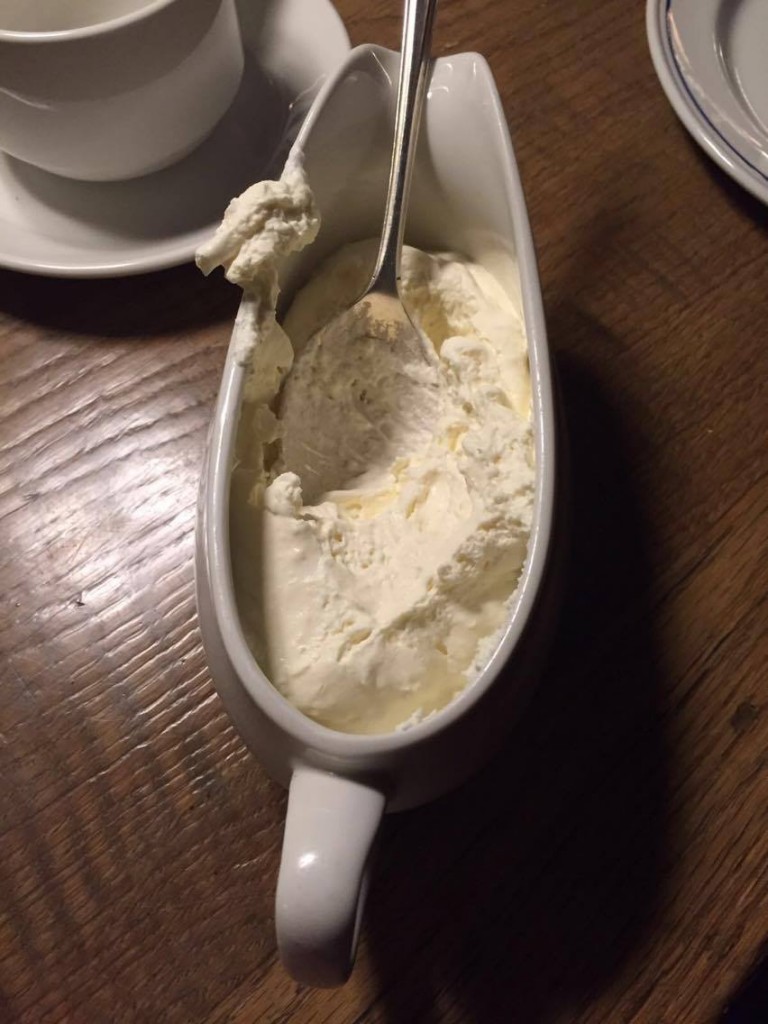 Just what you need for your fruit salad.

A Trinity fresher told Jellie that “at first they tried to convince us it was champagne cream, and then we thought it was some kind of Trinity special spicy fruit salad”. After being pooh-poohed by staff for thinking it was anything other than cream, one student noted a man “surreptitiously taking away a spoonful to taste in private”. The Tab can confirm that the white substance was indeed NOT cream.

To much fanfare and feigned disdain, the BNOC poll has been released this weekend.  The campaigning to win the esteemed prize has begun with zeal. Perhaps the most intriguing drive comes from Trinity’s Thomas Hughes-McLure who is known for his rippling, albeit slightly orange biceps. The campaign team behind Thomas’ race to win Cambridge’s biggest name have released a sensationally self-indulgent video. We recommend you take a look.

Meanwhile, Oliver Mosley, former Union President, defender of #freezepeach and man of unbelievable cheekbones, has publicly scorned the competition, saying “a true BNOC is born, not grown”. We, unfortunately, do not have any video evidence of Oliver half-naked to show you at this point.

Just a bit of carbon

In line with this week’s “Dies Irae” theme, Zero Carbon activists dressed up as death eaters and marched black balloons down Trinity street. When asked whether the balloons were made from sustainable materials, a spokesperson for the group simply replied “ha”.

On an unrelated note, during a Zero Carbon protest from last term, one activist can be seen holding the placard below. We never forget. 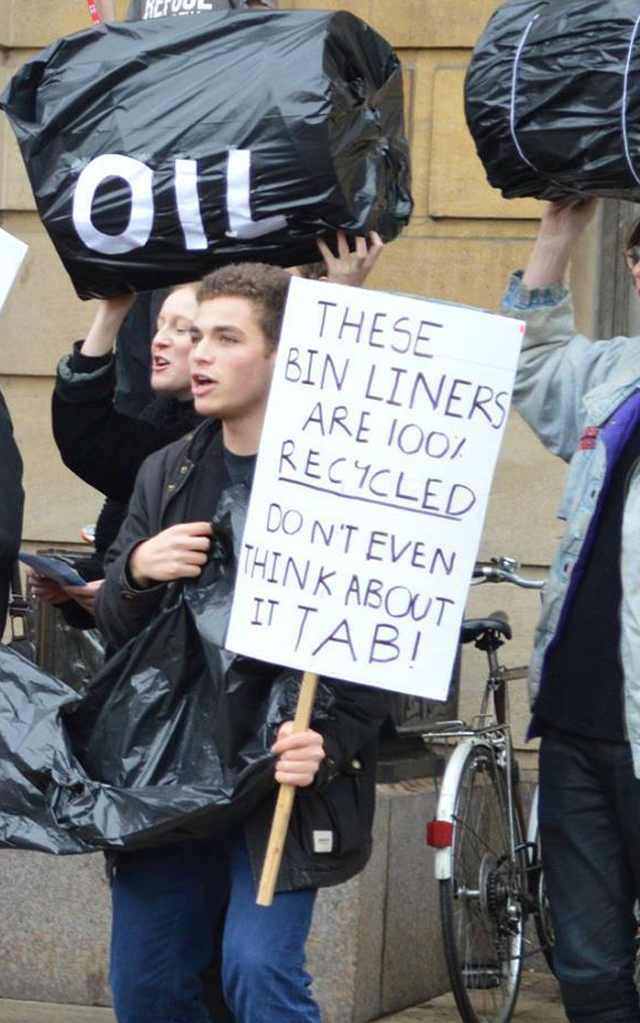 We did think about it.

Ellie’s “Let’s discuss sex” article last Saturday has attracted quite a lot of attention in the comments section. Jellie’s comment of the week comes from the brave “keyboard warrior no. 16834”. KWN attempted to not be “too personal” about your correspondent, before proceeding to suggest she should live in a bungalow surrounded by feline creatures.

Ellie would also like to take this opportunity to apologise for her bout of female neurosis, it must just be her time of the month.