ZOE D’AVIGNON reviews an honest and hilarious evening of theatre.

The most striking thing about 4000 miles was the flawless American accents of the whole cast. There wasn’t a single wobble or dropped vowel during the whole performance.

The decision to stay true to the original location of Manhattan was a brave one, as let’s be honest, American accents are annoying at the best of times let alone when they are fake. But the actors came through flawlessly, especially Gabrial Cagan, who maintained an earnest and introverted portrayal of  Leo, the prodigal grandson, who turns up unannounced to his elderly grandmothers at the end of a 4000 mile man-and-the-open road cycle ride across America. Sweaty, Smelly and at a point between grief and aimlessness Leo’s new age viewpoint triggers his political and emotional outreach in his elderly Grandmother.

The play unfolds in the front room of Leo’s eccentric and Marx exposing grandmother, Vera (Julia Kass). I was incredibly impressed with the staging of Vera’s home, the play unfolded amongst a carefully constructed and extensive array of  large oak bookshelves groaning with communist literature, musty 60’s relics and rouge piles of magazines, the name Castro clearly visible to the audience in bold vintage print. The details of the staging gave the whole performance a sense of authenticity that was reflected in most of the performance. 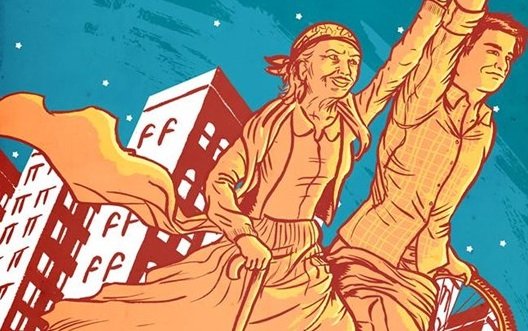 Leo cycles to see his grandmother

Despite the impressive quality of acting by Gabrial Cagan (Leo), Kim Jarvis (Leo’s not girl friend), Chloe Slattery (Amanda-Leo’s not-one night stand) and Emily Atkinson (Leo’s sister), the easy and comfortable performance of Gabriel Cagan, was in my opinion, unevenly matched by Julia Cass (Vera). I’m not sure if it was directorial, or just first night nerves but Julia’s portrayal of the elderly grandmother seemed a bit overdone.

The physical acting was good – she maintained an impressive, back-bending stoop for the whole performance – but the delivery came across a bit like a caricature of an old person. This wasn’t helped by the extreme makeup that had been used to age her, she just seemed at odds with the naturalism of the rest of the set and performance.

Saying that, ironically, Vera seemed most natural during the bizarre, and fleeting, scene where Leo and this 91 year old are just hangin’ out smoking a bong. This is one of many truly hilarious moments during the performance.

Despite this the performance grew to a comic climax. For me, the play was worth watching purely for a moment during a scene where Leo is arguing with his not-girlfriend Lily. Leo, impassioned by the row they are having makes a dive to ”feel how their bodies fit together” and it was honestly one of the funniest and well-timed moments of comic acting I’ve seen in Cambridge.

4000 miles is full of clever and hilarious dialogue, honest portrayals, and dark, sensitive moments that are given to the audience with a lightness of touch that is impressive.

A balance between darkness and hilarity; definitely worth getting down to Corpus Playrooms for!