LEYLA LESNIAREK-HAMID and CHLOE COLEMAN are wowed by the first 5-star production of the year.

It’s not often that a production truly deserves 5 stars, but this one did in every respect. Explosive, daring and strangely moving, Jerusalem pushes the limits of what we expect to see on stage. 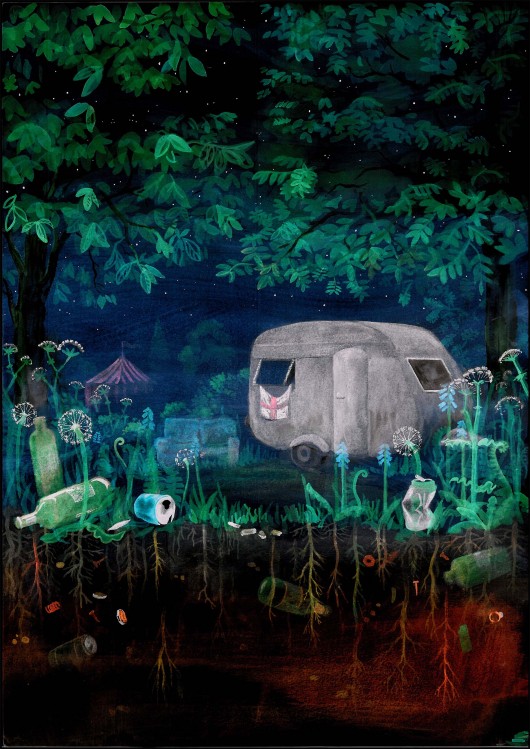 From the very beginning it was clear that we were going to be at least a bit on edge for the entire performance. The sweet and eerie opening a cappella rendition of Blake’s eponymous poem was in stark contrast with the following rave scene that was full of an infectious energy which was to sustain the entire performance. A believable hangover followed a believable party, and this is where the trouble begins.

Johnny “Rooster” Byron has never really grown up. Living in the woods in a dilapidated caravan, Byron spends his days drinking and dealing drugs to kids – a ‘modern day Pied Piper.’ However, at the beginning of the play, when unaware of the age gap, his relationship with his mischief of ‘rats’ seems like harmless fun. It is only later that it takes on the undertones of a sad kind of seediness. Under the impending threat of eviction, it seems like the party will soon be over.

The ADC certainly pulled out all the stops as far as staging goes: the set was absolutely fantastic. Under a canopy of leaves sits a vandalised caravan, the surrounding floor strewn with debris of the night before – in short, it was very realistically crap. Later, a banner is erected with the slogan ‘FUCK THE NEW ESTAT’ [sic]. It’s a setting which is entirely congruous with the play’s amalgamation of funny and tragic.

In a play concerned with alcoholism, destitution and a general sense of hopelessness, you don’t expect to be laughing for a large proportion of the play. But this is exactly what happened. The humour was perhaps in the subtlety. While obviously some of the jokes were scripted, it felt like a lot of the comedy was down to the cast’s interpretation of the lines and the spaces in between them. In fact, this production was hugely physical in that it seemed like every movement and interaction between characters had been perfectly choreographed. This didn’t compromise the play’s spontaneity, but instead brought an impulsive energy that was never to falter.

It’s impossible to come away from this performance without a huge deal of respect for its actors. Saul Boyer as the charismatic Byron exuded a repulsive magnetism that kept us in his palm the whole way through, whether he was telling tall stories or downing vodka alone. Boyer’s acting was so impeccable that he was Byron, and thus his tragic scenes were given all the force they necessitated. The supporting cast were equally impressive, consistently bouncing off each other to create a stellar ensemble performance. Guy Clark as the long-suffering Ginger was pedantic without being irritating, whilst Georgia Wagstaff as the impressionable Phaedra reduced the audience to silence with her haunting singing.

ADC mainshows are good on the whole, but Jerusalem was on a different level. In two and a half hours the play ricochets between the genuinely funny and the irresistibly tragic without once straying into superficiality. Brilliant.