Well earlier this week I was set the challenge to learn some boxing by the Tab and I can safely say that I was a bit apprehensive at first.

Considering the fact that my dad squashed the dreams my big brother had of becoming a boxer, it is safe to say that boxing is not my family’s forte.

Nevertheless, I was determined for it to go well as I am always up for trying something new so why not learn boxing. 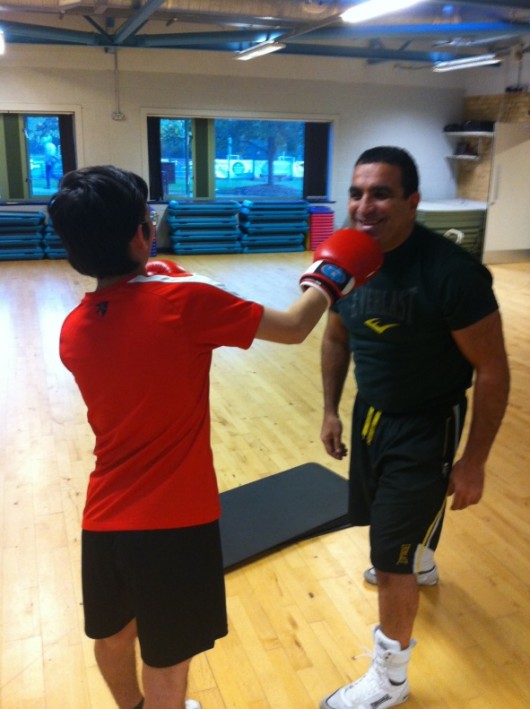 Chinning the instructor. 1-0 to Clubber Steve.

When I arrived at the class I was the only novice in the class which in all fairness was to be expected so I had to start from the beginning and learn the ropes, if you pardon the pun.

Firstly, we started off with some light stretches focusing on our upper body considering that we soon were going to be practising against punch bags.

Then for the next ten minutes we “shadow boxed” which involved throwing punches in the correct manner with no gloves against an imaginary person which helps improve your boxing style and shape. 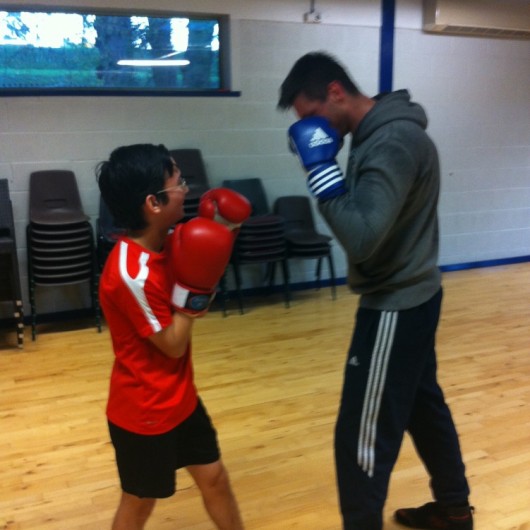 Squaring up to a guy twice my size!

For the main part of the session it involved five two minute rounds, with a thirty second break in between, practising body and head shots against the punch bags which varied from light to heavy in order to make sure that your technique was right.

At the end of these rounds, we had the speed challenge to see how many punches you could throw in a minute and the trainer said I threw 137 which I thought was pretty good for a beginner. 😉

After the time on the punch bags, we moved onto what all boxers should be good at which is of course skipping.

Skipping helps improve a boxer’s ability to be light on their feet and their general stamina and this was a stamina exercise as we had to skip continuously for twenty minutes.

This was a tough exercise but definitely helped improve my fitness as a whole. We concluded the skipping section by skipping whilst running on the spot for a minute which I thought would be easy but it turns out that it is a lot harder than it looks. 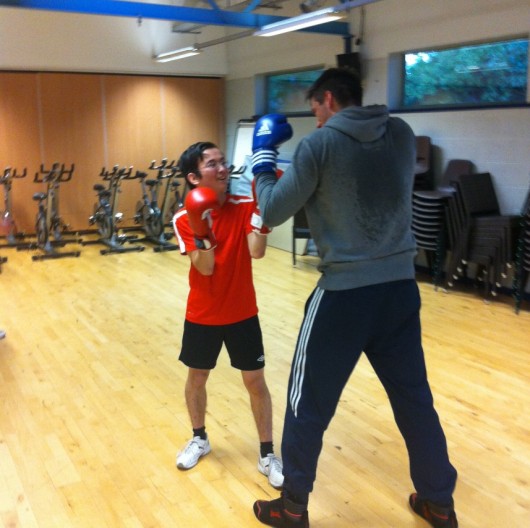 The session concluded with a fitness workout with several stretches. These included squats, sit-ups, a one minute plank and press-ups. Even though this sounds hard, this actually was alright and in my opinion, it was the perfect way to conclude the session.

Therefore, with regards to Boxercise as a whole I would say that it was a fantastic experience and I really enjoyed myself as it was so much fun to partake in.

Plus, from practising boxing I have complete respect for professional boxers as it is a lot of hard work and Rocky certainly made it look easy as well!!

What do you want Clubber/Quizzer/Boxer Steve to do next? Leave your ideas in the comments and we’ll make them happen.

Starting uni as a newlywed: How my husband helped me through the disappointment of freshers’ week