On Thursday morning, Bristol’s Extinction Rebellion (XR) activists climbed to the roof of City Hall in order to demand a response and plan of action from Bristol City Council over Bristol’s illegal levels of air pollution.

XR’s planned “week of action” has now come to an end without a response from the Council, but the rebels on the roof are not giving in and say they “expected better” from the Mayor.

The Bristol Tab spoke to Pete Hughes over the phone, one of the activists on the roof and Bristol’s regional XR Coordinator, who told us “I am genuinely prepared to stay up here as long as it takes”. 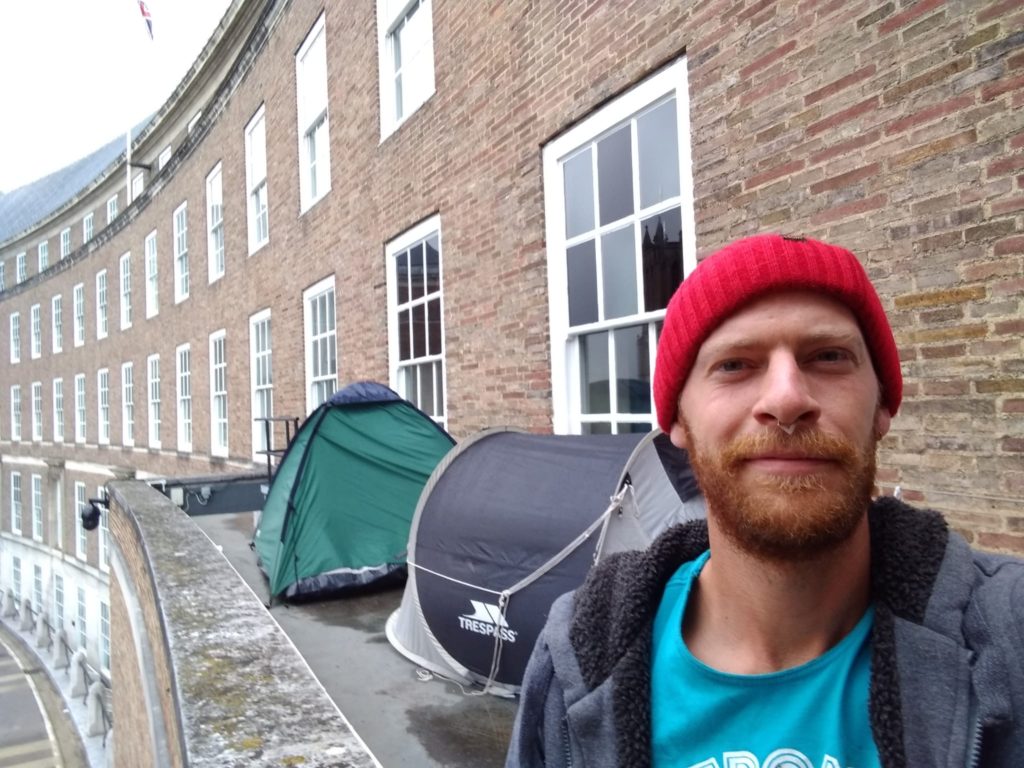 XR began their week of action by nailing a “list of demands for clean air equality” the door of City Hall, addressed to the Council and the Mayor, Marvin Rees.

Pete told us that the group of rebels on the roof come from different professions; some are artists, one is a student and he is self employed, so they are “all making a sacrifice” to be there.

We asked how long they could stay on the roof for, to which Pete told the Bristol Tab: “I’d love to go down this afternoon, please, if the Mayor is listening in on this phone call. Realistically, and I’m not just saying this for the media, I am genuinely prepared to stay up here as long as it takes. It is that important.”

‘If 296 people were being stabbed to death on the streets each year there would be outcry. No one is treating this with the same respect’

“When you really connect with what 296 people a year dying means its horrifying. We laid out the shoes on the grass of College Green to try and bring that home. If 296 people were being stabbed to death on the streets each year there would be outcry, there would be police on every street, no one is treating this with the same respect and I want to know why.” 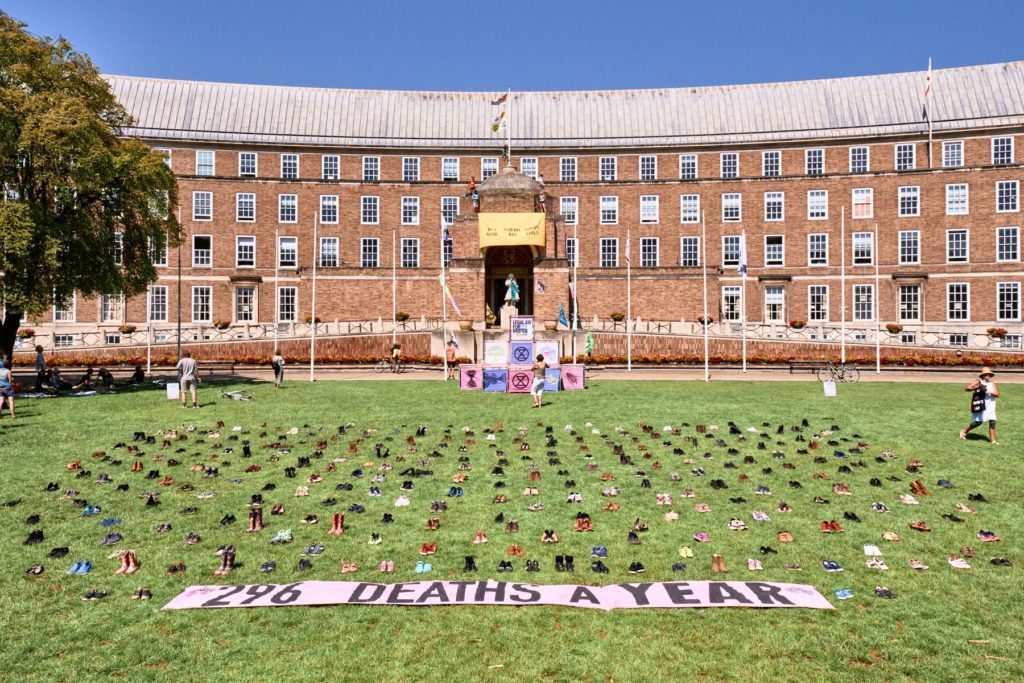 We asked about their morale, and how they are looking after each other while they wait for a response from the Council: “It’s really great, I think it was John Cleese who said ‘you can be serious about something and still laugh about it’. We have really taken that to heart and made ourselves a nice comfortable home, we have team meetings morning and evening to make sure we are all open with each other about how we are feeling.

“We make sure we have at least one dance party out on the roof, which the people down below seem to enjoy. We get the flags out and the music pumping and we shake it all out.” 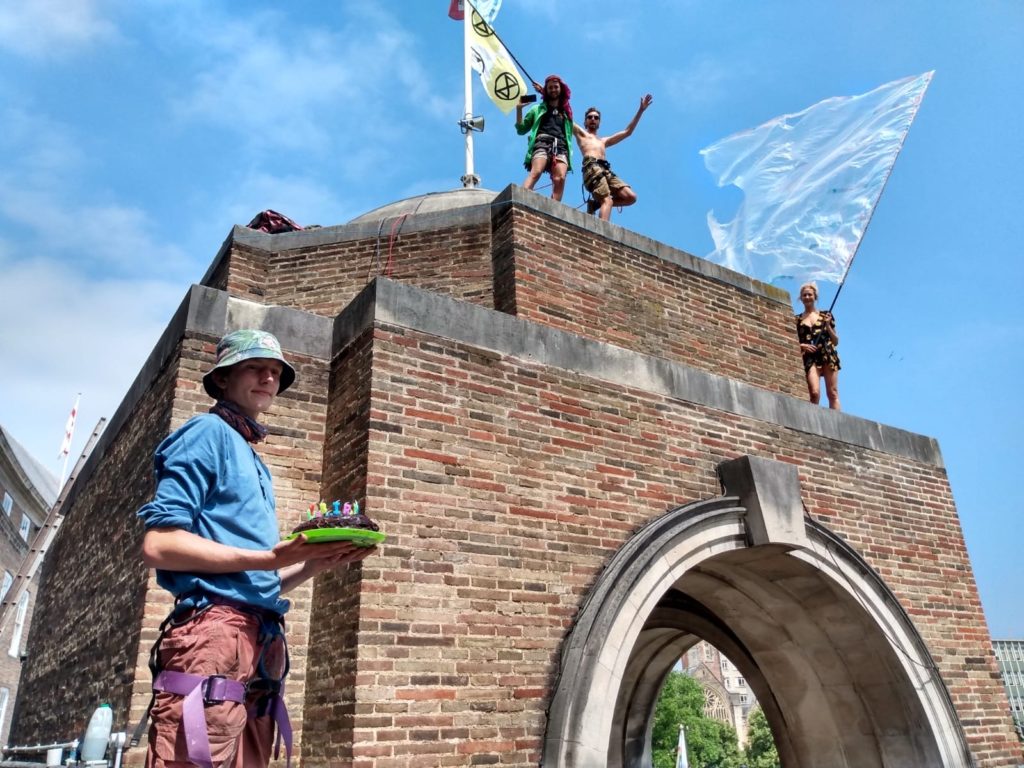 One of the rebels, Arlan Jones, celebrated his 21st birthday on the roof of City Hall. Photo Credit: Pete Hughes

From strangers buying them coffee, to offering to cook them meals, the generosity from the public has “overwhelmed” and “surprised” the rebels, said Pete. “This has been the most positive and uplifting action experience i have ever been involved with in XR,” he said.

“We have had an unbelievable amount of positive outreach and interaction, messages on social media and on our crowdfunder. We’ve done a call out for 1 min videos to be sent in to us which we projected on to the City Hall building last night and loads of people have been sending in letters to the council. It has been very easy to keep morale high because of the support.”

XR projected video messages from supporters on to the City Hall building on Sunday evening and live-streamed it on Facebook.

We also asked how students can make a difference: “Where students are very adept is social media and getting involved in youth activism like XR Youth and School Strike for Climate. The youth have shown themselves, rallied by the likes of Greta Thunberg, to be an incredibly powerful force. Its not very easy for adult politicians to belittle the youth, because they are the ones that are going to suffer the most from all of this. Its their voices that should be the centre of everything.

“I am always so impressed by the youth that are involved, they are so clued up and selfless and provide real inspiration for those of us who are a bit older in this fight. We really need them to keep bringing their energy and their ideas and their concerns to the floor.”

‘The representatives of the city need to start delivering’

Pete told us that they decided to bring their action to the roof, instead of protesting in the the streets, in order to highlight the responsibilities of the “senior powers” and bring the issue to them: “It is our council and our mayor who are ultimately responsible for providing air that is not going to cost lives, cause asthma or cancers.

“The representatives of the city really need to come to the table and start delivering.”

We asked Pete to sum up his experience in three words, to which he said “Disappointing. Fun. Empowering” and added that “We expected better” from the cities governing powers.

Of course, since they have not left their rooftop campsite, we asked Pete about their toilet situation (since it’s what we had all been secretly wondering), but he chose not to comment.