‘What’s happening in America is wrong, and it can happen here’

The first of the Black Lives Matter protests started in Bristol today, with protesters marching from Eastville Park to Bristol city centre.

The protesters marched from Eastville Park, down the M32, and culminated their protest at College Green where they peacefully lay face down on the ground with their hands behind their back for eight minutes and 46 seconds, symbolising the length of time a white police officer knelt on George Floyd’s neck, ending his life.

The Bristol Tab spoke to protesters present on College Green.

Protesters are lying down on College Green with their hands behind their back for eight minutes. #BlackLivesMatter pic.twitter.com/DeV8gdCYmi

Friends Jason and Jake came along today to show their support for the protests: “It’s like we’re going back in time. People getting mistreated. It’s 2020, it shouldn’t be happening.

They talked about a number of videos they had seen of unarmed black people having their lives taken for no reason. On the George Floyd video, they expressed the horror they felt as they watched him being murdered: “It was just wrong. When he was crying out for his mum as well…” They paused.

They also expressed their disappointment in the police officers present at the march, alleging that they were approached to show their support, but refused: “One of the people asked them to join and they were just smirking. It’s really disappointing. The police are the public image. They’re supposed to be protecting us. 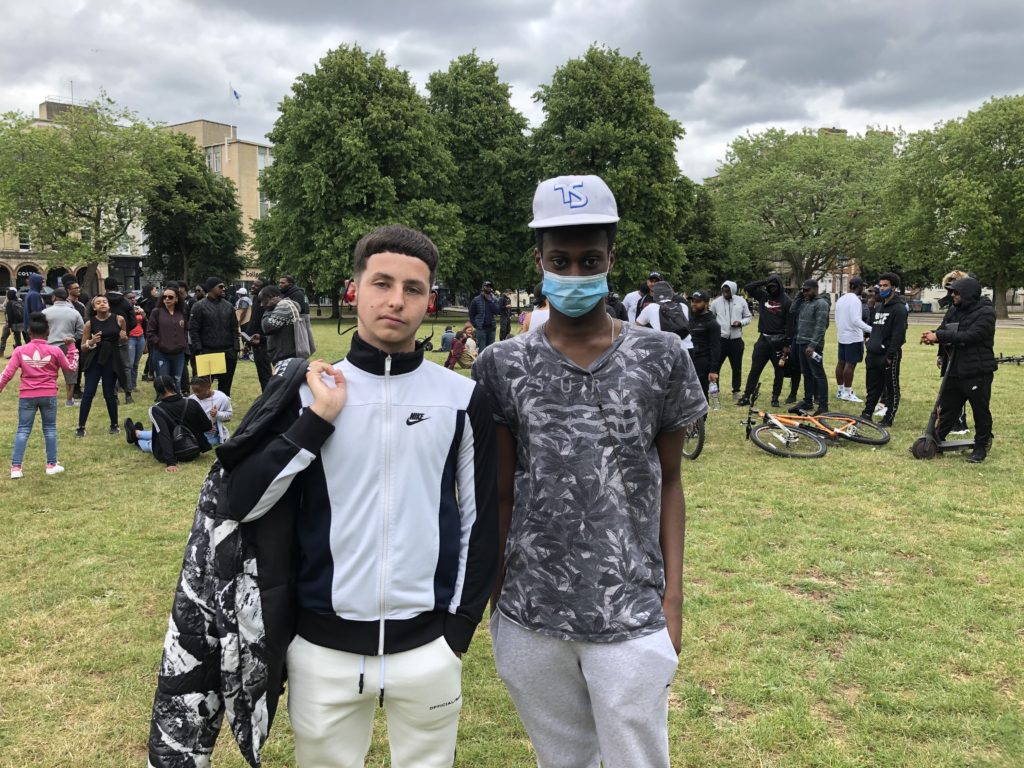 “When they see something like this, they shouldn’t not want to get involved. If people see them get involved, they’ll know that they support it, but if they’re just standing to the side… They could at least be around here so people would see that they are trying to join in because they want to support it.” (Avon and Somerset Police did not respond to requests for comment).

One police officer said that it was because they “have to be impartial”.

Happy, a Bristol resident who immigrated from Kenya as a child, said that she was there “supporting the black community of Bristol and obviously supporting black communities around the world.”

She told the Bristol Tab about her experience growing up and working in Bristol, and the racism she has received: “It’s confusing. I was the first black person at my school, and it’s confusing because I don’t know how little kids can be racist. I just didn’t understand it.

“Growing up, I understood why my mum would say stuff like ‘educate yourself’ because you’re not seen as an equal here.”

“In school I studied black history during Black History Month, and that was maybe for a few days. And then I studied the Romans from literally primary school to secondary school.”

Black Lives Matter protesters lie down on College Green in Bristol for eight minutes and 46 seconds just as George Floyd was made to do. @SWNS#BlackLivesMattterUK #BlackLivesMatter #GeorgeFloyd #protest #GeorgeFloydprotest #bristol pic.twitter.com/JUQwTwg8ko

As a young adult, she worked in a nursery. “Seeing the little black kids separated from the white kids was so weird. The white kids wouldn’t play with them as much. It starts from there. I think it’s from the parents and the teachers. It’s just how the system is set up.”

“I went for a walk yesterday. I walked past two white males who said ‘it’s happening in America, why do you need to bring it here? It’s an American problem.’ But it’s that they’ve never walked the walk, and they’re ignorant and don’t want to understand it. They don’t get it.”

When asked what could be done to change it, she said that talking and engaging was the way forward: “You can’t understand this. Talk more to the black community. When your kids have questions, answer them in a more open-minded, less biased, or ignorant way of thinking.”

Jason, Jake, and Happy all agreed that they feel this is a turning point. Happy said: “I’m just glad that people who don’t normally understand it are opening their eyes a little bit more.” 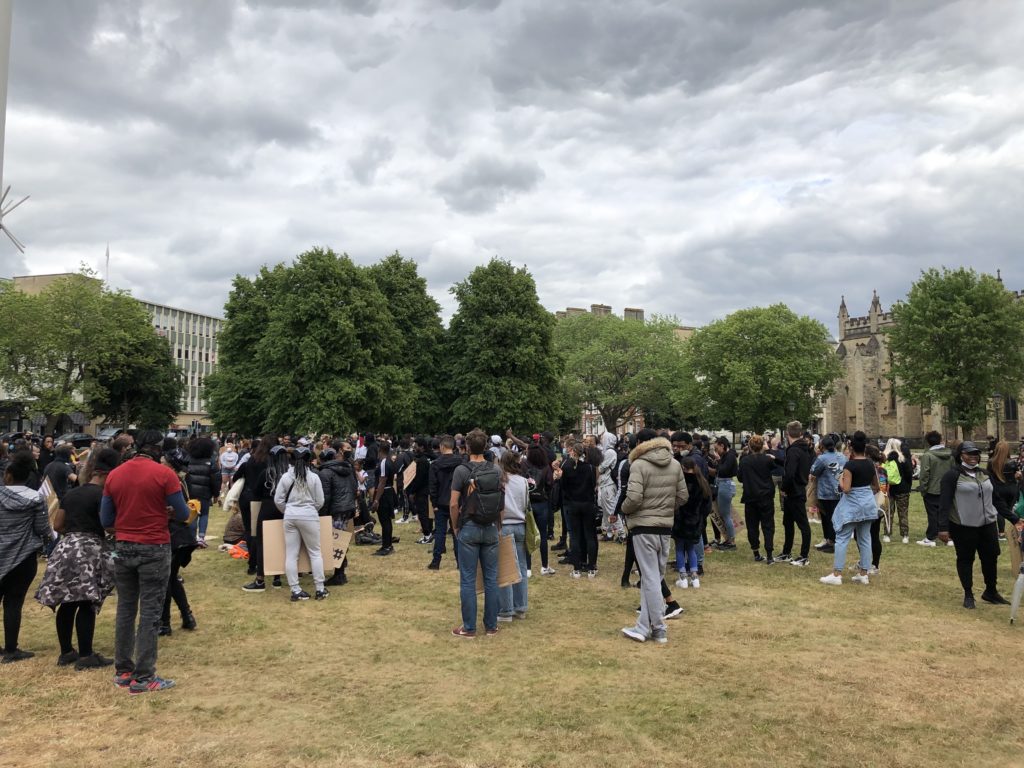 The protest started clearing around 3:45pm

Jake and Jason said: “I think it’s a turning point. It’s just the beginning. It’s not going to be one where people join in because it’s going viral, it’s gonna be one of those ones that keeps carrying on, not just because it’s trending. Join in, not because you’re going to get on camera, but because you actually want to join in.

Avon and Somerset Police did not respond to requests for comment on the allegation regarding officers at the protest.

• ‘I’ve had to work in call centres’: Bristol Uni staff speak out about temporary contracts

It is SO insta worthy, and it’s staying for good

It’s official: Bristol Uni bans freshers from having one night stands in halls

July has been an ‘explosion of noise’ for Bristol residents, according to the Noise pages

Love Saves The Day has been rescheduled for May 2021

Big shame if you already refunded your ticket

She literally recorded a video for BED!

This is due to social distancing restrictions

The statue of the BLM campaigner appeared overnight

There will be some in-person events with number caps

Recent discussions on the group have deteriorated into ‘insults and bigotry’

The fame we have at this uni is astonishing

‘If you want to talk, just come and talk to me. You don’t have to do something so dramatic’

This is the first known arrest

And you thought you were edgy? Have you even seen a FUZE show???

Petition for UoB to start temporarily renaming its buildings like this??

Lockdown saw the cleanest air since 1994

‘The climate emergency is still the biggest threat’

It’s official: Bristol Uni bans freshers from having one night stands in halls