Third Year UoB Physics students have started an online campaign that criticises the School of Physics choice to only allocate one extra hour of exam time for their summer exams.

Their open letter has been emailed to the heads of faculty 52 times so far.

The extra hour allows time to scan all their answers into one document and upload their exam, but, according to students, does not account for the impact of inadequate at home working conditions, technological issues, poor internet connections, lack of contact with lecturers and cancelled classes.

In contrast, students who took open book exams in January after a year industry were given 24 hours to scan and upload their answers.

‘There have been a sequence of errors, poor judgement and lack of communication’

The third year students said: “We believe there have been a sequence of errors, poor judgement and lack of communication from the faculty.

“Although the current situation has put a large strain on the uni and their resources we, as a student body, do not believe this is reason to neglect and ignore the student voice and opinion.”

The students criticise the “severe lack of communication” from the faculty compared to other universities : “Despite there being 8 weeks between the end of last term and now, an update email with exam times and the approach to uploading answers was only released 2 weeks before the first exam is scheduled to be held.

The students outline how the one extra hour discriminates against them, including how the departments approach to international students sitting the exam could encourage malpractice: “Students in different time zones have been told ‘Some of you are in time zones where the time difference is so large that this is not practical; we don’t want you starting the exam before 8am or after 6pm, so please let us know if this is the case and we will allow you to sit your exams at a reasonable hour’.

They also argue that there are inconsistencies within the universities scheduling of exams, with some faculties are giving their students up to a week to complete their exams: “While the average appears to be 24-48 hours. The School Of Physics have only allocated 1 extra hour”. 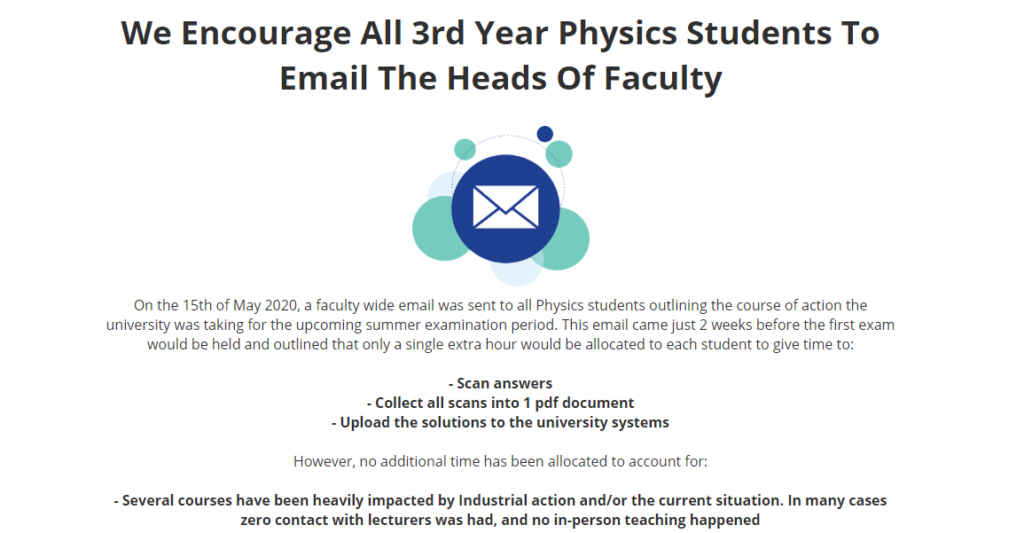 The website cites wider students concerns, and asks students to email their open letter to staff: “Many students feel they are spending upwards of £9k+ a year on an education, that this year has been severely disrupted. Not excluding the missed hours lecturing due to strikes.

In response to the campaign, a University of Bristol spokesperson said: “Third year Physics students have made us aware of some concerns they have around their forthcoming examinations.

“Obviously, the format of these will be very different this year with students taking them online from home with staff in Physics, and indeed across the university, working hard to put in place alternative arrangements.

“We are sorry if the detail around how the exams will actually work has not been explained clearly enough, especially if this has caused unnecessary anxiety.

“We have written to all third-year Physics students to clarify arrangements. If they have any further concerns or questions, staff in Physics are on hand to help and we would encourage students to get in touch.

“In short, the one hour of additional time is an allowance for the new format of taking exams at home. Students can upload work after this time. We will not be applying late penalties for delayed uploads and students will have an opportunity to test the upload system in advance.”

Students were also emailed by Dr Andy Young, who commented that the short length of exams should prevent cheating: “The Institute of Physics was concerned that 24-hour open-book exams were considered to be open to abuse.

“We do not expect your performance to be the same as it would be if nothing had happened”.