Infamous graffiti artist WES has shocked thousands as sightings of his “deeply political” work are found around Bristol.

Following his controversial spray-painting of the Avon Gorge, where he daubed a shortened version of his name on the cliff-face, the graffiti-artist turned folk-hero has been spotted again. 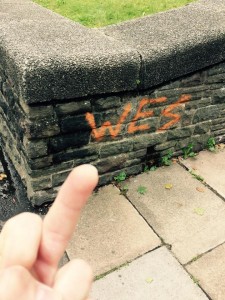 Some have described his work as “shockingly muscular”.

While some have described the rebel’s new work as “deeply political” and “shockingly muscular”, others were not impressed.

Local painter Jack Simmonds told us of his dismay.

“My little brother has no dexterity in his hands. Yet he still manages to write his name in a slicker way than WES seems to.” 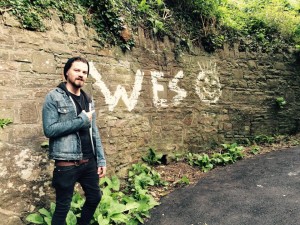 Local painter Jack Simmonds was not impressed by the new exhibition.

Jack added, “His work is less Tate, more budget weekend in Bangor. If you got me some 5 year old paint, some glue and bits of old pasta, I could still do a better job than this prick.”

He also told us that “the police should be worried, because he might inspire other idiots to do the same.”

If anyone knows of the whereabouts of WES, contact the police or armed forces immediately.