Sponsored by Bloomberg
Bloomberg delivers business and markets news, data, analysis, and video to the world, featuring stories from Businessweek and Bloomberg News.

I want to be that awesome

Most grads see office jobs as well-paid boredom, full of grey suits and monotony. But looks can be deceiving – there’s more going on behind the walls than you think. With hundreds of thousands of clients worldwide, Bloomberg is the global business and financial information and news leader. Here, graduates don’t just timidly scuttle between desks laden with coffees, teas and the odd bit of photocopying – no, at Bloomberg, they have a real impact from day one.

It’s not the kind of typical corporate job you’d expect. Don’t believe us? Hear from the grads themselves – we spoke to Dylan, Jana and Damel about their experiences as Bloomberg graduates and why they chose to work there.

Want to work with industry leaders, CEOs and government officials? Join Bloomberg and become part of a company that will give you responsibility from day one – click here for more information 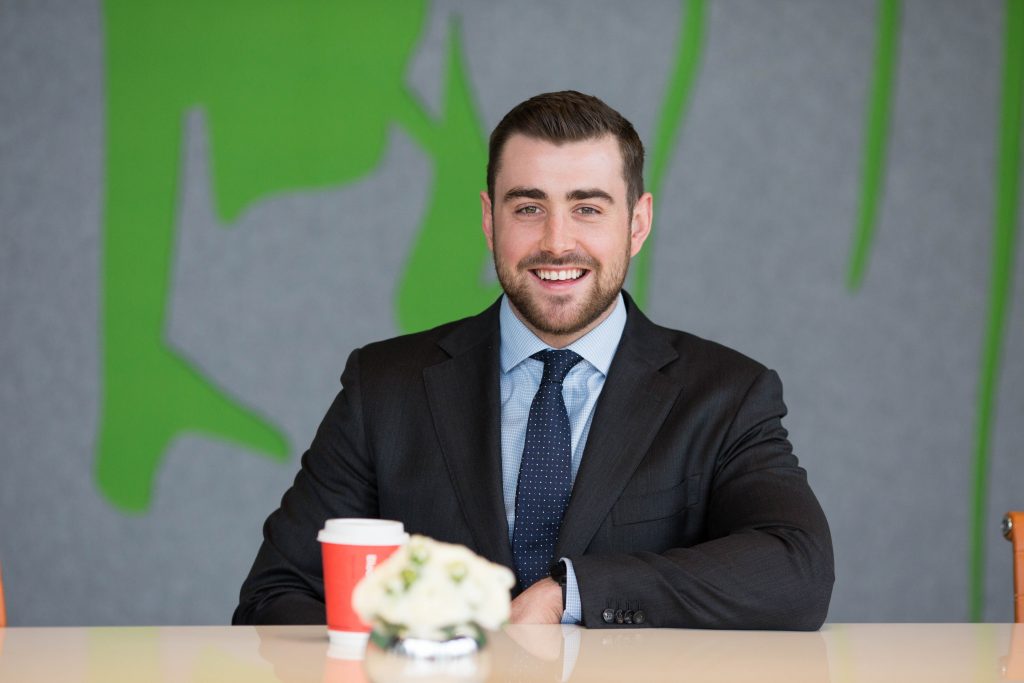 My friend worked at Bloomberg before I did, and he was always raving about the development opportunities he had here. He wasn’t lying either – I’ve been here for about a year and I’m already working with CEOs and government officials as part of my day-to-day role. Being able to work with private clients straight away has really helped with my exposure and networking outside of the company which will benefit me when I become an account manager in Sales.

Analytics is essentially about solving our clients’ problems, resolving their queries and helping them use the Bloomberg Terminal, a computer software system that allows users to monitor and analyse real-time financial market data and trades. The list of questions we get is endless, no two questions are the same and that’s what makes it exciting. Sometimes we even get people who don’t realise they’re messaging the terminal and think they’re messaging their mates instead – you really can’t predict what’s going to come through.

When I joined Analytics I spent the first three months training. You’re with the same people every day, so the social element is massive. You immediately have a group to click with, you all start and go through the process together which is a lot of fun. When someone new starts there’s department drinks and every summer there’s a company-wide “picnic”, which is honestly more like a festival. There’s live music, lots of food, activities – the lot.

Something that’s really unique about Bloomberg is the level of opportunity you have. Before starting, I’d never considered that working in Analytics could be this flexible and varied, I thought it would be really rigid. If you take an interest in something, there are so many opportunities to learn more about it, it’s really surprising how quickly you can pick something up here.

Unlike with my first job, Bloomberg has allowed me and the other grads to have an impact straight away. Having been here for just over a year I’ve already gained a lot of responsibility and am currently mentoring a product team on our Foreign Exchange product offering.

They don’t just give you the responsibility and watch you sink either; Bloomberg gives you access to really good support networks. For example, all the deputy team leaders meet up bi-weekly to discuss leadership challenges, and then jointly discuss how to overcome them. It’s great to be able to grow and learn with one another, both within my own Analytics team and across the other departments.

No matter if you work in Analytics & Sales, Global Data or Engineering, as a Bloomberg graduate you’ll be able to make an impact from day one – apply now 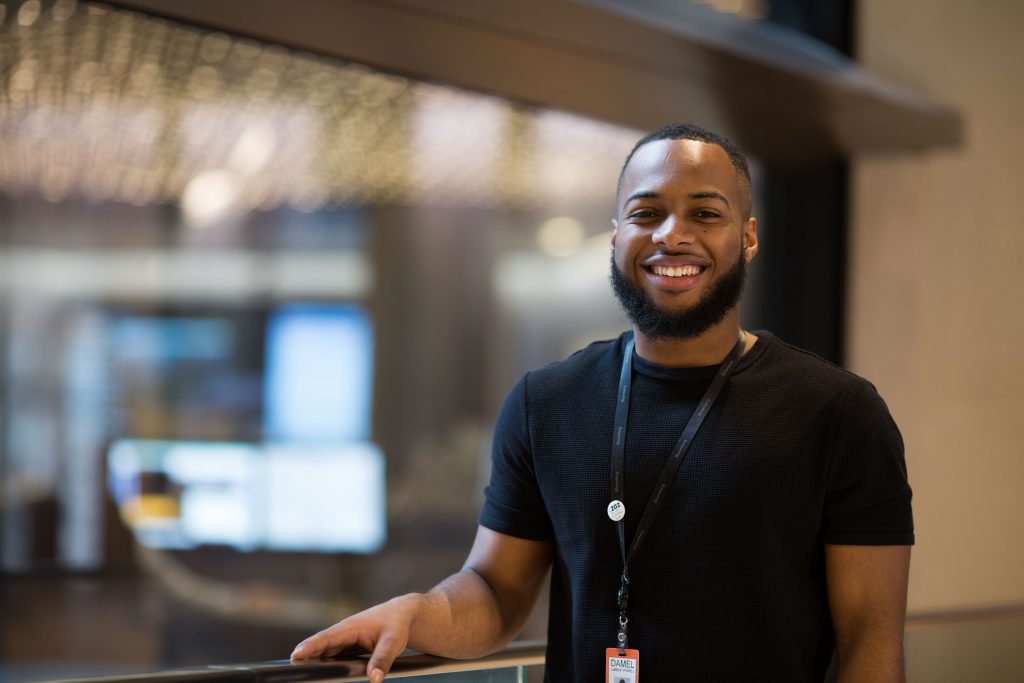 I chose Bloomberg over other technology and finance companies because it’s such a hub for technical development. My coding training was done by a core developer who serves on a Standards Committee, which essentially means they design how a coding language works. I also didn’t realise how big Engineering really was at Bloomberg. It’s the largest department here, with over 5,000 engineers, developers and data scientist rolling out new software daily. It’s one of the best places to technically learn and grow – I really get to see the impact of my work.

My day starts at around 8:30, I read my emails and check the developer requests, which are basically tech-based problems, from the different teams. We’ll have a meeting about the wider business goals we’re trying to achieve, what kind of steps we need to take to meet them, and then the work begins. I can’t tell you any details about the project I’m working on at the moment as it’s a secret, but usually a lot of my time is spent pulling apart software code and making it more efficient.

I’m technically a Software Engineer, but we don’t have job titles at Bloomberg. The company’s hierarchy as a whole is quite flat. We have this concept of ‘no one gets an office’, so everyone’s in pods, which is great because it means you get to build relationships with people from outside of your own team. Our London office was actually designed to support collaboration, and has won prestigious architectural awards for its innovation – not to mention that the views are incredible.

I think a lot of companies try to claim they’re a meritocracy, a company where people have the right to express their opinions and are encouraged to share them openly, but at Bloomberg, it’s truer than anywhere else I’ve been. I’m always offered feedback when I ask, which is really helpful because people are very clear about what you need to do to progress within the company. Bloomberg focuses on rewarding people who are trying to make a positive impact on the company as a whole, not just within the scope of their day-to-day roles. This is great because it means there’s not as much bureaucracy around changing things, so if you have an idea you can see the impact really quickly.

As a Bloomberg graduate, you’ll get access to industry experts, training opportunities and support systems to help you grow – click here for more information 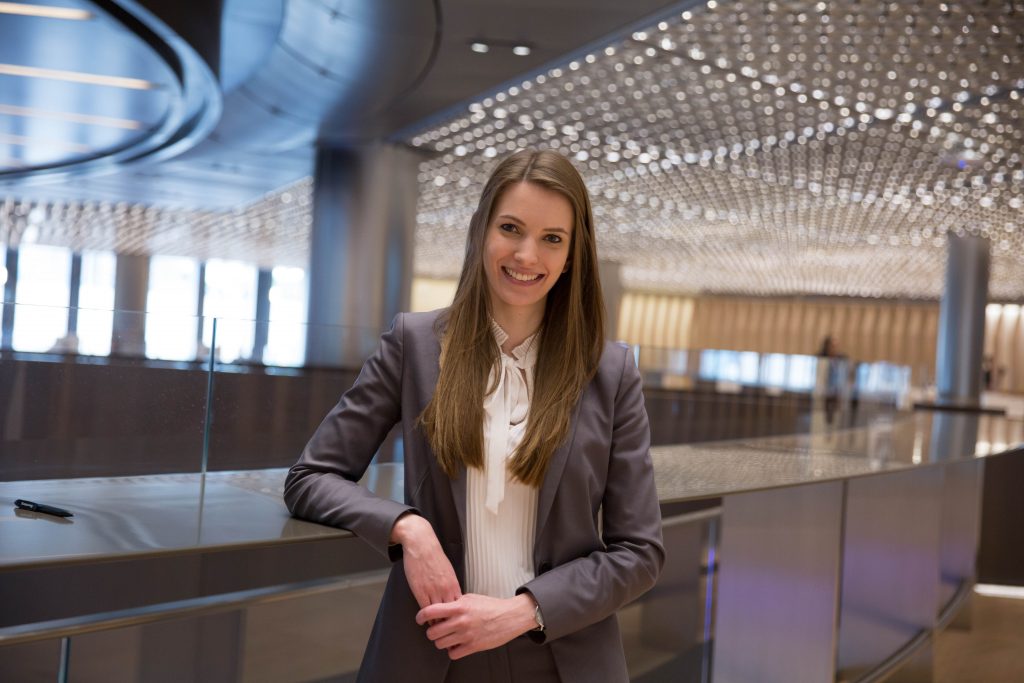 I work in Global Data, which is responsible for making sure that our products, including the Bloomberg Terminal, are equipped with the most up to date data available. It’s actually a really exciting time to be in this department because financial markets now have more data than ever before and Bloomberg is at the forefront of making this data accessible to our clients. Similar to other departments, the role can be quite diverse, so depending on what my interests are, I can make it as client-focused or as analytical as I like.

When I first joined, I worked more on the client side in a team within Global Data that covered client enquiries. Soon after starting, I realised that the data we were analysing was becoming more and more complex and technical. So, to manage the data more efficiently, I decided to learn Python, a coding language. Gradually I honed my interests and thanks to the flexibility within Bloomberg, I joined the derivatives team I’m in now.

At Bloomberg upskilling, like learning Python, is really common. Venturing outside of your current skill set is highly encouraged and everyone has access to training and support at all times. We have our own internal resources called Bloomberg University where we can access online courses and Ebooks, as well as in-house courses that other colleagues run. Working with people from different backgrounds, both culturally and educationally, means that I’m continuously developing myself and how I work.

I honestly didn’t expect the job to be like this. When I started straight out of uni, the image I had of the job, especially after coming from an Economics degree, was of number-crunching in a back office somewhere. I didn’t expect such a collaborative and fast-paced environment. Bloomberg wants everyone to drive the company forward and challenge themselves. I’m actively encouraged to step outside of my comfort zone and change things – it’s definitely not the spreadsheet-based role I’d expected. Here, I’ve had an impact from day one.