Which one of these final year library personalities have you morphed into this term?

Christmas feels like it was two minutes ago, yet all of a sudden, dissertation deadlines are looming and exam season is upon us. We’re left with a maximum of four months to revive our dying degree grade and secure some form of grad job – the pressure is only increased by the fact that everyone else seems to have started this process a year before us.

It’s no wonder most people seem to lose the plot towards the end of third year. But the fun question is, how will you lose the plot? The possibilities are endless – whether it’s you or your mates, you’ll definitely recognise these almost-grad personalities:

Feeling the grad panic? Don’t stress – Arcadia are looking for driven grads to join their central London HQ all-year round, and you don’t need to have studied a fashion-related degree – apply now 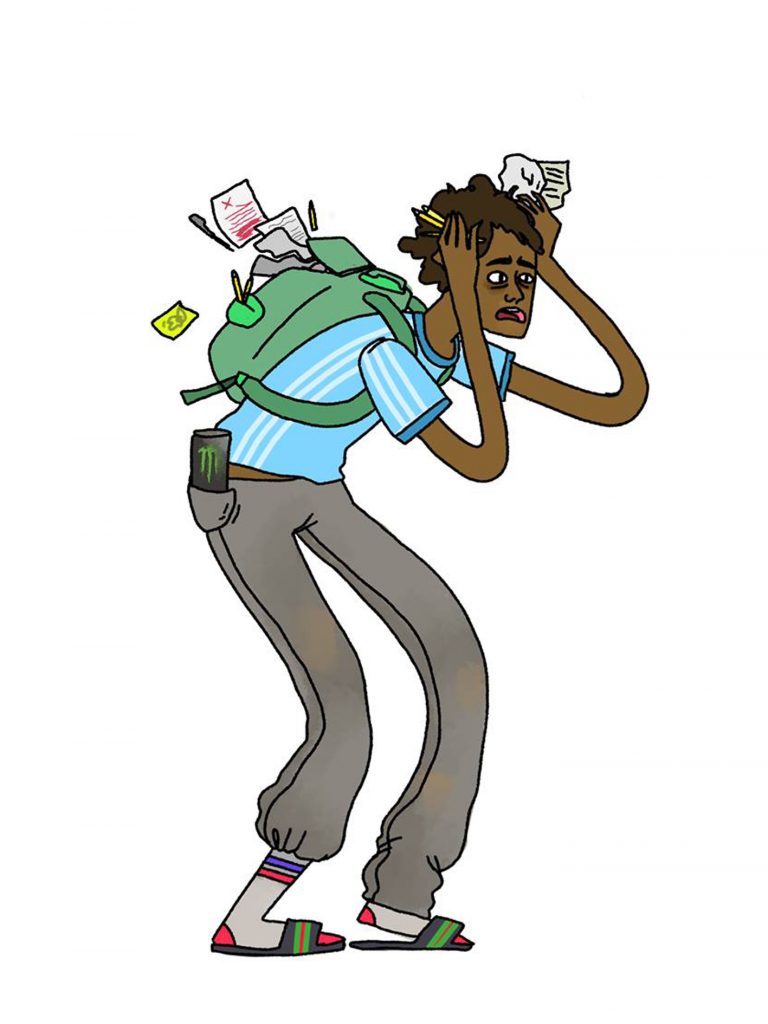 A victim of their own once-chilled nature, the worrier spends their final semester revising really, really, painfully hard but not taking in any useful information because they’re too stressed. Midway through third year they were hit with the stomach-dropping reality that they’d paid thousands and thousands for uni, but that now the end is nigh they’ve got very little (and very low grades) to show for it, and their dad is going to kill them when they can’t find a job come September.

Now they spend long, caffeinated hours in the library, having a quarter-life crisis and panic-reading lecture notes they’ll never be able to wrap their heads around. They return home at midnight to a room plastered in keyword posters and mind maps, a.k.a., the ramblings of a madman, and stoically try and ignore the fact that a diet of filter coffee, energy drinks, meal deals and adrenaline is giving them a stomach ulcer.

The person who does nothing, yet still scrapes good grades 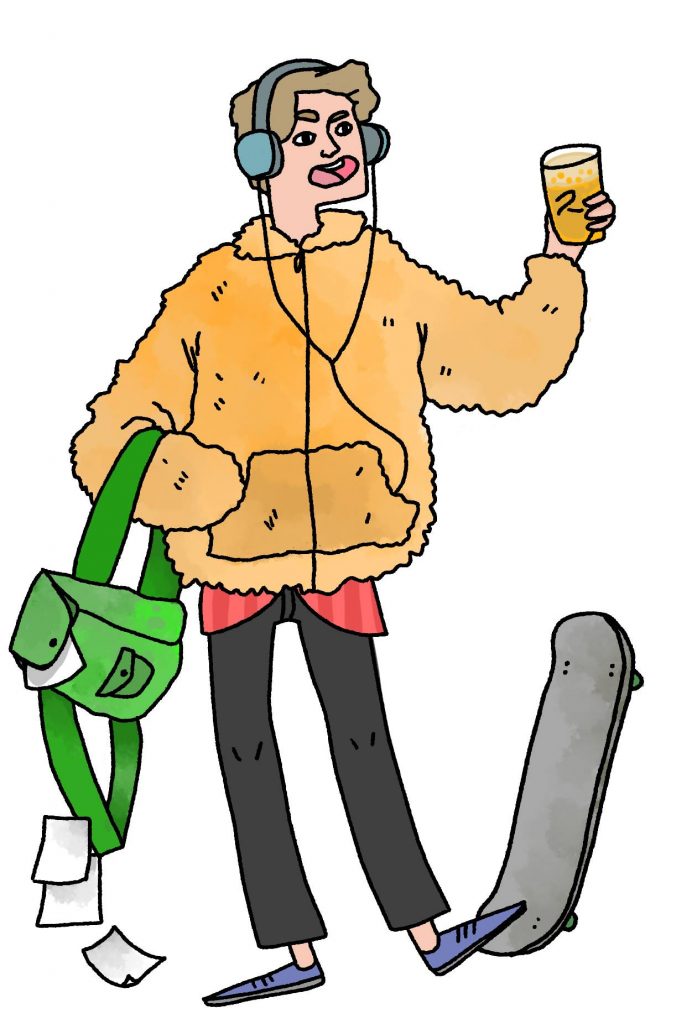 Nobody is as resigned to their fate as this guy. After spending three years sitting on the sofa playing Fortnite and eating Super Noodles with their housemates instead of writing essays, they assume that there’s no way to redeem their grade before uni ends. They make a vague charade of revision – more because all their friends are busy studying than anything else – by turning up at the library at 2pm with obnoxious music blaring out of their headphones, wondering loudly why they can’t get a seat during exam season.

They leave stroppily after 10 minutes to go to the pub because not even one per cent of their degree interests them, and when else in their life will they be able to sit about and do absolutely nothing? Miraculously, they still somehow scrape a 2:1. They wear a fleece at all times, whatever the weather.

Apply for a role with Arcadia who have a unique and exciting work culture with brands such as Topshop, Topman and Miss Selfridge – find out more about grad jobs at their central London HQ here

The insufferably organised one 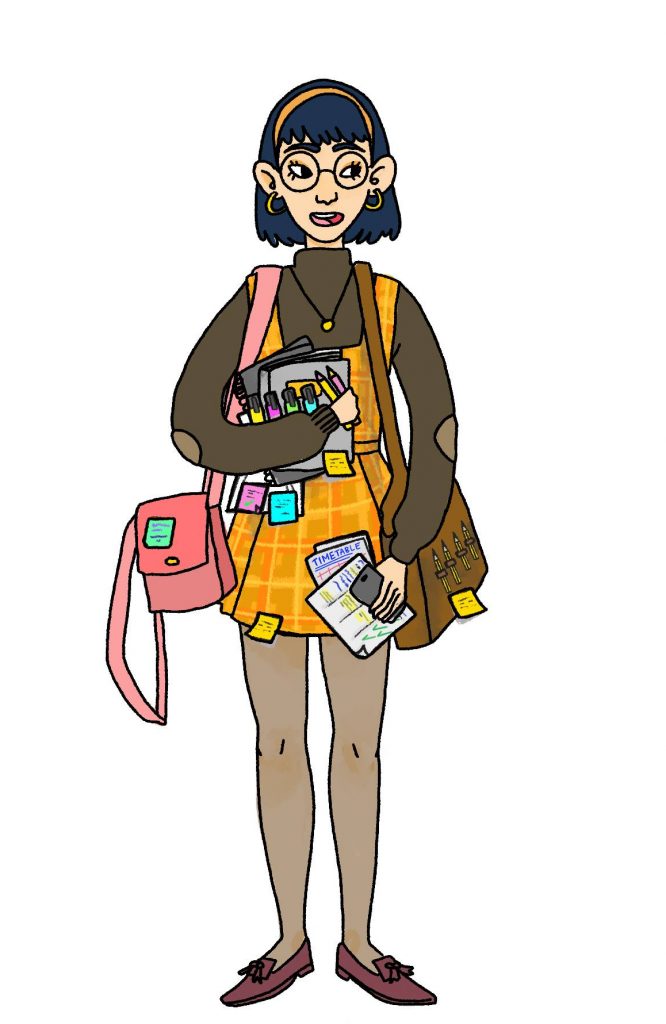 We’re all slightly jealous of our hyper-organised friend – we know we could nail our degree just like them, but we just can’t seem to get it together. They can be found in the library from the moment it opens, and have been known to wait outside until the librarian unlocks the doors. Bordering on the psychopathic, they sit in the same seat every day – woe betide anyone who dares sit in their place – with a desk covered in highlighters and coloured post-its, in tidy piles. Their plentiful notes are organised alphabetically as well as colour-coded, and they’ve drawn up a revision timetable which to them, is gospel.

You’ll try and go for a long lunch with them but they’ll have none of it, checking their watch every two minutes until you agree to go back to studying. They’re alarmingly in control, and are the only person you know who’s allowed enough time to revise each and every topic on every single module. They study efficiently for 10 hours a day and then go to the gym to blow off steam, looking calm and collected at all hours of the day. They obviously get a first and go to work for KPMG in their Russell and Bromley shoes.

The one who always says “I have literally done no revision, seriously!!” 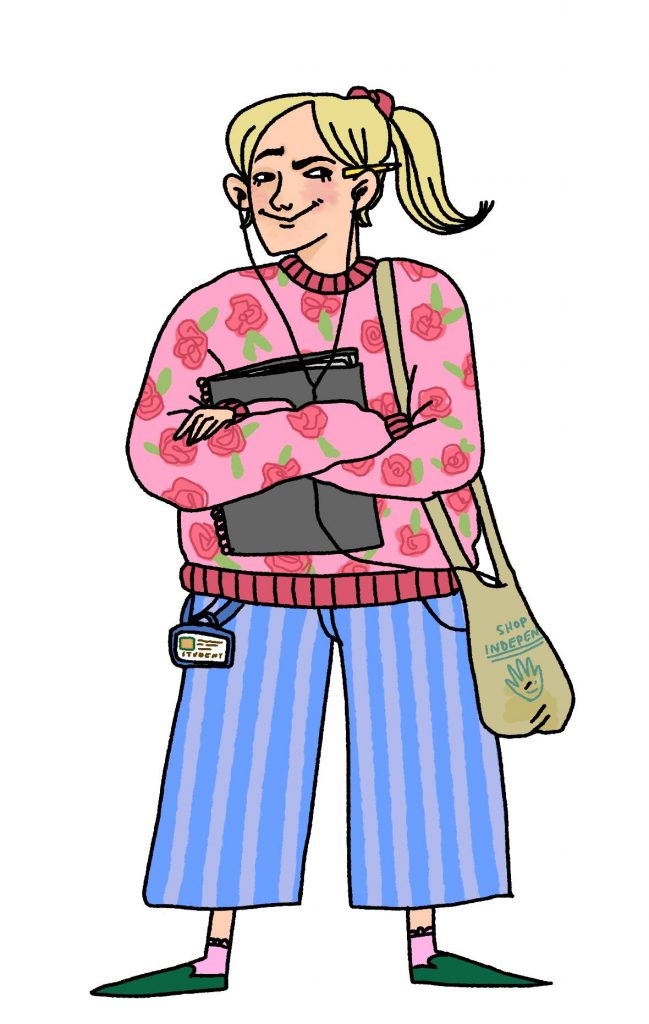 Potentially the most irritating person you know at uni, this particularly annoying peer is capable only of wailing about how little work they’ve done, how they’re “going to fail everythingggggg”, and is able to provide very little conversation about pretty much anything else. But they are a God damn liar, and you know it because a) they are a control freak and would never let that happen, and b) you bump into them every. single. time you go to the library, looking very serious and acting suspiciously around their own notes.

The “faker” is the type of person to get annoyed with their more chilled-out course mates for getting better marks than them, but is very annoying and smug about getting 80 in that really tricky essay, even though they “did it in like two hours, honestly”. They obviously get a first, patronisingly congratulating you for your 2:1 that you know they would have cried if they’d got. You hate them.

Don’t have a plan for after uni? Arcadia are one of the UK’s leading fashion brands, and they’re looking for grads from a variety of degree backgrounds – find out more here

The person who sits in the library all day watching Netflix 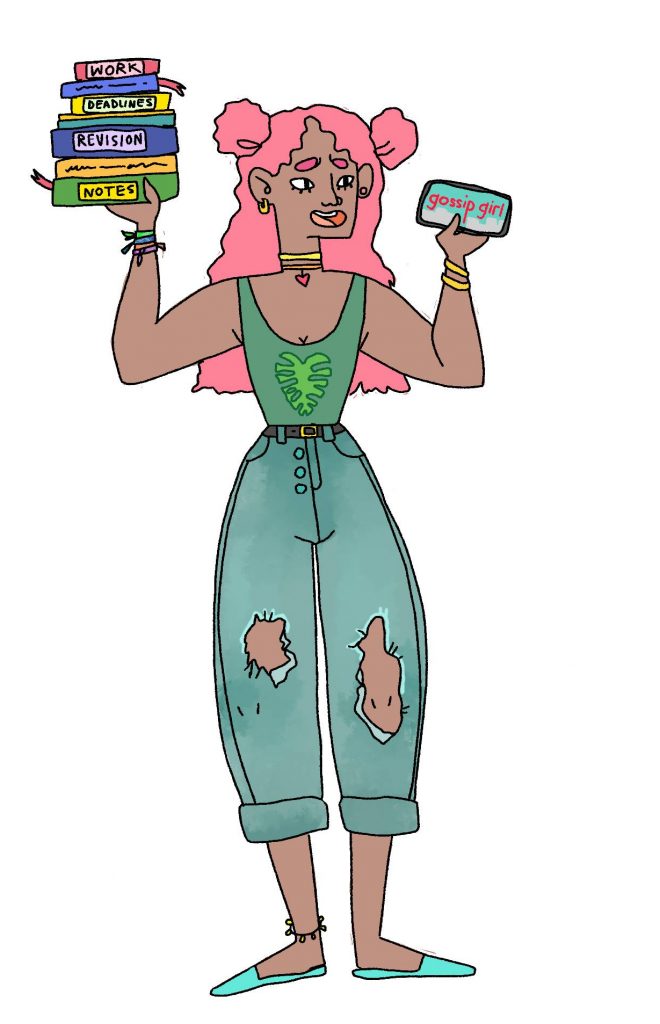 There’s a bit of this person in all of us, really. They conscientiously get to the library at 9am sharp, and dutifully sit there all day frowning at their laptop, with a big old pile of books for company. On the face of it, they’re an excellent student, but really, they are a master of deception – if you were to take a peek over their shoulder, you’d see that they’re actually wiling away their library days re-watching episodes of Gossip Girl, punctuating it with a page of reading once every couple of hours.

Exhausted from trying to absorb all those confusing words, they head back to Netflix to reward themselves for exerting all that effort on their boring degree. They’ll stay at uni until 5pm and leave feeling satisfied with the full day of work they’ve smashed, only to be shocked when they scrape a 2:2. Since when was it not a thing to absorb all information by osmosis just by sitting near some books for weeks on end? 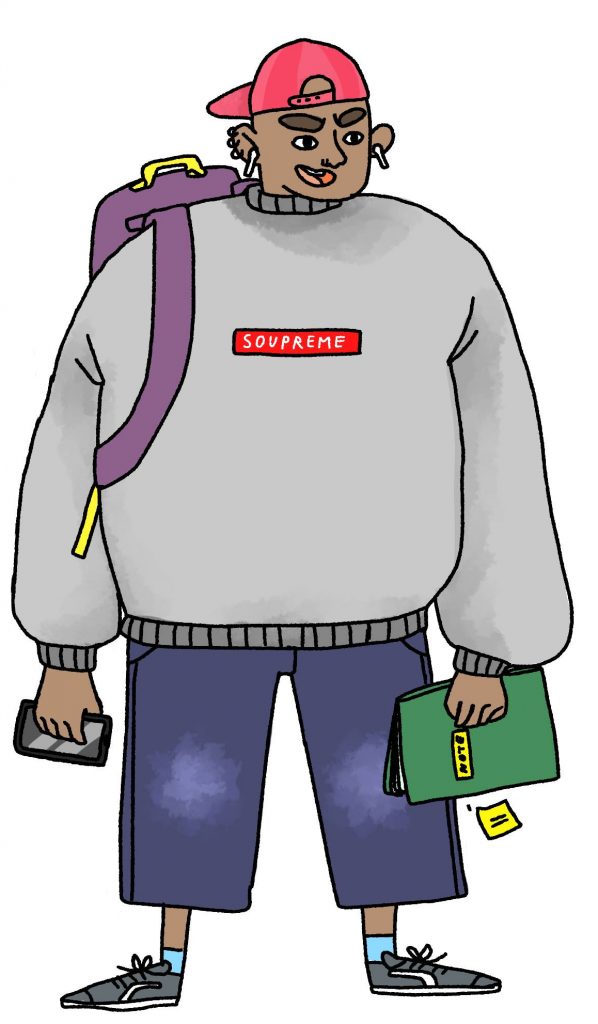 We’ve all seen them in their natural habitat – this “pack animal” shamelessly turns up to the library with a massive group, and takes over a whole bank of desks en-masse. Much like The Showman, they equate spending time in the library with taking-in information, and so they spend the whole day chucking things at their mates and having conversations in too-loud stage whispers. They’re trying to enjoy uni while they still can, but deep down you can tell there’s a nagging sense of unease about the lack of work they’ve put in over the last three years. This is always manifested by one member of the pack who gradually grows silent amongst the snorts and laughs, before earnestly asking the others to “just crack on for twenty minutes”.

The Pack Animal can also find themselves led astray under the guise of “group work”, which more often than not descends into the whole table bitching about their tutor or someone irritating in their seminar, but rarely results in actually getting any work done. Their books sit untouched on the group study area desk while their anxiety about what the hell is going to happen to them after uni gradually grows – so they’ll go home after the library and sneakily revise in peace, alone.

Don’t know what you want to do after uni? Arcadia recruit all year round and have a massive range of grad roles, no matter your degree – apply now for a job at their central London HQ 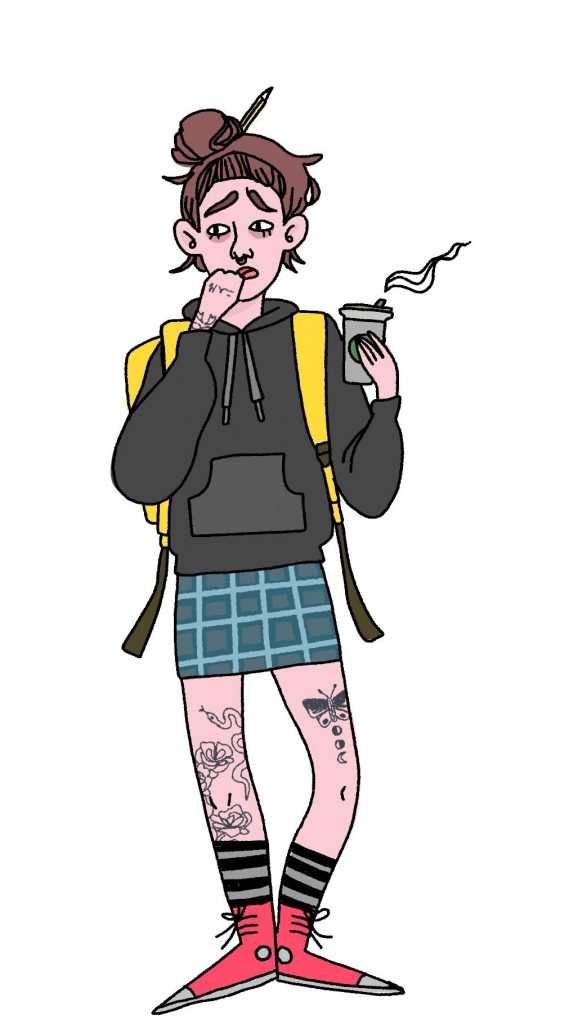 The poor, poor struggler. All through third semester and into exam season they come to the library on time, with genuinely good intentions. They’re honest with themselves – they know they haven’t worked super hard over the last three years, they’ve been too busy enjoying uni. They’re only human! But now the panic has set in and they know they’ve only got one more chance to turn it all around, and they can do it with some good hard work in the final hour – they swear this time will be different.

But you and I both know, and no matter how much they don’t want to admit it, they know it too – this time will not be different. Those three years of fun have made them pretty popular, so everyone who walks past their desk wants to stop for a chat, and their mates are constantly coming over to ask if they want to grab a coffee. Despite all their desperate best efforts, they’re constantly waylaid in their good intentions. It’s a common tragedy – they have the potential to get a first, but will inevitably end up with a low 2:1 because they’re forced to spend 80 per cent of their day having inane small talk with loose acquaintances.

Are you in a panic about what to do when you finish uni? Apply for a job with Arcadia

Arcadia is made up of some of the UK’s best-loved fashion brands, including Topshop, Dorothy Perkins, Topman and Miss Selfridge

They’re looking all-year-round for motivated, organised and creative grads to join them in their stunning Central London HQ – Click here to find out more about their grad roles