A new anonymous confessions site for UoB students has been established on Facebook, and has been publishing racist comments, some have been even taken down after students have reported them.

A spokesperson from UoB told the Birmingham Tab the site has “no affiliation with the University of Birmingham and the University will be working with Facebook to have this racist and offensive content removed.”

The page was set up on 24 June, encouraging students to speak “freely from censorship”, following a Brumfess moderator announcement that inhibited “posts replying to specific political submissions.” Posts on Brumfee have included statements such as “George Floyd had it coming” and “white lives matter Burnley!”

The UoB spokesperson continued to say “we would also encourage people to use the established Facebook process to report offensive content and the University will be referring the content to the West Midlands Police. We are committed to creating, and maintaining, an inclusive learning and working environment, where equality is promoted, diversity is valued, and discriminatory behaviour is not tolerated.”

Ed Sale, a UoB student told the Birmingham Tab about getting some of the posts removed “I noticed on the page that there were a large quantity of posts that were racist. I reported a lot of these posts to Facebook, which they initially said didn’t go against their community standards. I requested that these posts be reviewed and two of the posts I reported were taken down by Facebook on the grounds of Hate Speech. The page is still active and there are still some very problematic posts on there, hopefully if enough people report these posts and the page, Facebook will take them down.” 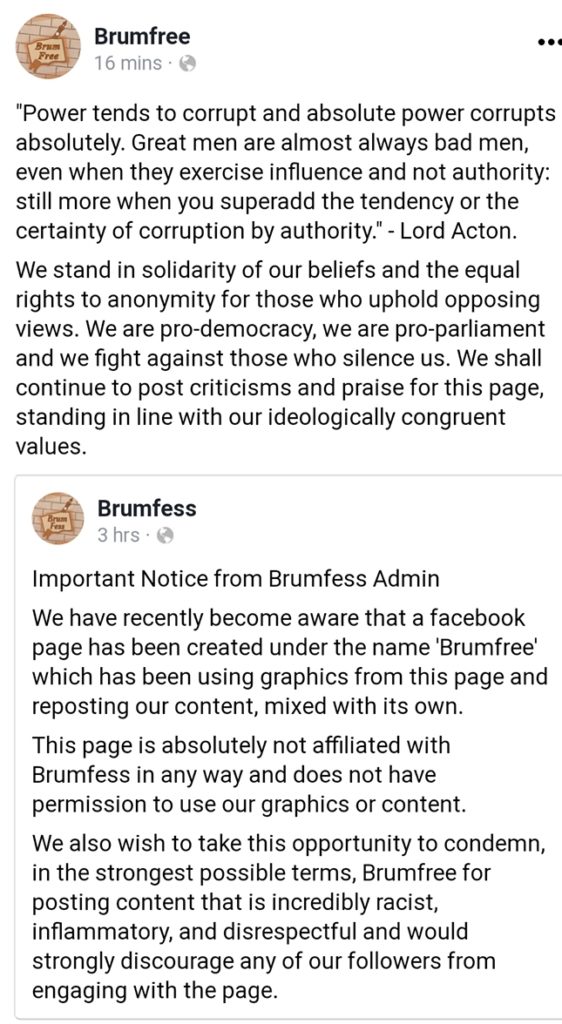 Brumfess released a comment at 4.30pm, making clear that Brumfree was not affiliated with their page, stating that they “wish to take this opportunity to condemn, in the strongest possible terms, Brumfree for posting content that is incredibly racist, inflammatory, and disrespectful.” When contacted for comment, the moderators told The Birmingham Tab that they had nothing further to say on the matter for now.

Brumfee responded with “we stand in solidarity of our beliefs and the equal rights to anonymity for those who uphold opposing views. We are pro-democracy, we are pro-parliament and we fight against those who silence us.” The Birmingham Tab have contacted Brumfree, however they are yet to make a comment.

• ‘I am disgusted by myself’: UoB student apologises for racist group chat
•‘Free from censorship’: an anonymous, Brumfess-style page posts racist and anti-BLM confessions
• UoB is investigating the Birmingham student involved with the racist group chat