400 students were stranded outside the Great Hall

The exam season got off to a cracking start as hundreds of students were left waiting for an hour outside the Great Hall for a 9.30am exam to begin.

English Lit students taking the Popular Fiction exam, as well as students from several other subjects, were forced to wait as the wrong numbers had been put on the desks.

Outraged students have described the experience as "disappointing", "reeking of B.O", and "off putting", whilst the uni apologised for the "administrative error". 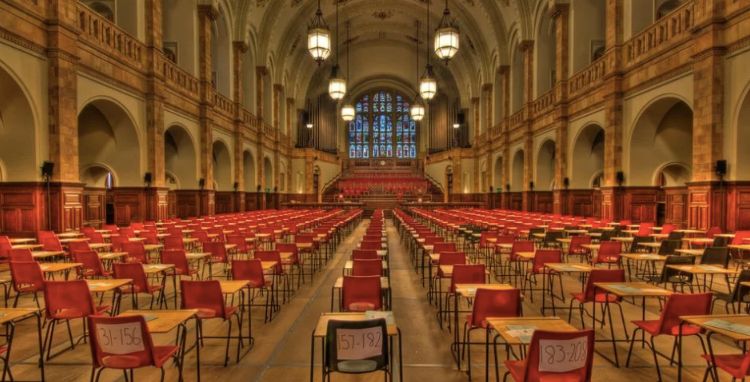 The foyer was rammed with early hopefuls, their brains full to the brim of information that they have spent months revising.

However, everyone's plans were thwarted when 9.45 rolled round and an invigilator showed up to tell everyone that something had happened and they would need to "start from scratch" so the exam would begin "at 10 at the earliest."

At approximately 10.10am, an invigilator came outside and told the students that the exam was about to start. At this point everyone crammed into the hot and B.O infested foyer where we were then stood for a further 10/15 minutes before actually entering the exam hall.

English Lit student Annabelle shared her thoughts on the delays: "I could have had an hour longer in bed, or watching Met Gala outfits, or swiping relentlessly on Tinder. But no. I was standing in an overcrowded entrance hall which reeked of B.O, gradually feeling what little information I knew for my exam spilling out of my brain like a sieve."

On entering the room, there was no organisation and everyone was struggling to find their seats, with one student loudly saying: "There are no signs, are we meant to guess where we're sitting?"

The invigilator then told everyone to "take a deep breath" as students were lucky they would get to finish by 1pm, as opposed to the planned end time of 11:30am.

The Birmingham Tab contacted the uni who say they would like to "apologise for the delay" and it was due to "an administrative error, the desk numbering during this particular exam was incorrectly set out and needed to be corrected before the exam could start."

Concerning any special consideration, the uni say that "consideration will be subject to the normal review of results across the whole cohort."

English Lit student Amy Hampshire states that "it’s just disappointing that we aren’t guaranteed a smooth exam experience when we’ve all put a lot of work in. It was actually quite off putting to be delayed but not able to use the time well."