There is going to be a free Winter Spectacular on campus, featuring an ice rink and helter skelter.

The event, which takes place in the Chancellor’s Court on December 7th, is the first of its kind and will even have a ferris wheel and gift stall.

President of The Guild, Jack Mably, posted the event and said: “Eight months ago, an ice rink on campus was a hopeful pipe dream as part of my election manifesto. Today, with the help of Roberto Sorrentino and staff at the Guild it’s a reality and more.

“If you are around on the 7th December make sure you come on to campus for the first ever Winter Spectacular!” 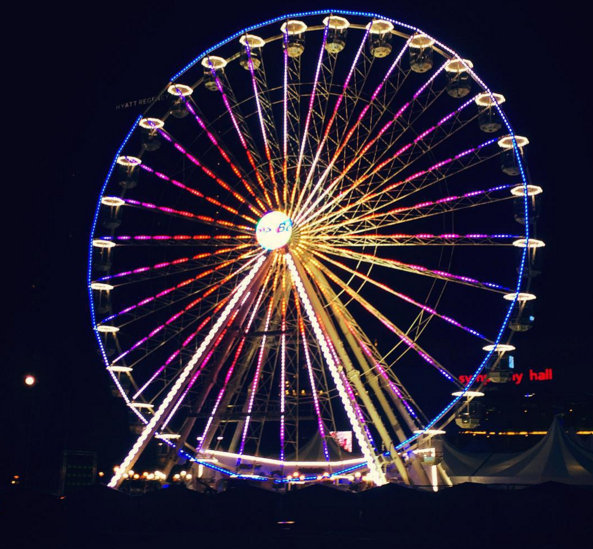 The Frankfurt Christmas Market also has a ferris wheel

There will be times allocated specifically for final year students, students of the UoB School and Winter Ball goers to ensure everyone gets a fair slot on the ice.

There will also be performances from various music groups from LumSoc, JabSoc and Birmingham Acapella guaranteed to get us in the Christmas mood.

Abi Farrell, a member of acapella group The Uptone Girls, said they are looking forward to performing.

She told The Tab:”It’s going to be a brilliant day. My acapella group The Uptone Girls will be showcasing some of our newest arrangements for the event.”

Students are excited about the free event, as it’s a cheaper alternative to the popular Frankfurt Christmas Market in the city centre.

Fourth year English with Creative Writing student Cecilia Effa said: “Normally this kind of event would be quite expensive, particularly in the city centre. I think it’s amazing the University have put on an ice rink for free – a lovely Christmas gift.”

But others have concerns about health and safety. Anthropology and African Studies student Suzanne Stone told The Tab: “It does look really fun, but alcohol and an ice rink sounds like a recipe for disaster.”

Jack Mably told The Tab: “We have such a great campus and after going to Grad ball I knew we could do so much more with the space we have.

“Roberto Sorrentino – Housing and Community Officer – and I teamed up to create a winter spectacular for everyone to enjoy. The event is open to everyone in the community and we even have the new university school coming along to the big event.

“We are hugely excited it’s all come together and amazed by the response. In less than 24 hours over 2,000 people said they were interested.”