Living longer than someone else isn’t news

It’s in every sodding paper and on all the news reports. If you’ve managed to ignore it, you’re a true hero and please share with me your secrets, for you have done the impossible and avoided the complete non-story that is Queen Elizabeth becoming the longest reigning monarch.

Today, the queen becomes the longest reigning monarch, beating her great great grandma Vic by a day. And do you know what? After searching long and hard, I can’t find a single fuck to give.

Let’s think about this rationally for a second. This is essentially a celebration of someone living longer than someone else. And not even by that much. She’s 89, which is quite old, but it’s no 112, which is the age of the oldest person in Britain currently. 112 is an age worth celebrating. That’s defying nature. 89, in this day and age, really doesn’t warrant anything more than an impressed nod and a card.

And are we even surprised she’s lived as long as she has considering she has an estimated net worth of 300 million? Do you understand the kind of healthcare that can buy? The kind of nutrition she must be getting? I’m so broke I eat crisps for dinner and can’t pick up my prescriptions because I don’t have eight quid, so I’ll probably be dead at 50. Give me 300 million and I bet even I’d make it the other side of 90. A rich woman living longer isn’t news.

The only reason why this is considered a big deal is because she’s royalty. Imagine if she wasn’t: it would be reported in alarmist tones in the Daily Mail under the headline “DESCENDENT OF IMMIGRANTS MAKES IT TO 89 SCROUNGING OFF TAXPAYER’S MONEY”. But because she’s very loosely descended from the bloke who conquered us and named himself king in 1066, this is apparently a big deal.

It’s worrying we care so much. Or at least, we’re told we care. This non-story has been on the front page of every newspaper. Before it had even happened there was thinkpiece after photo feature dedicated to the topic: Who was the better monarch Liz or Vic? Ten things you didn’t know about the two Queens. 8 facts about the Queen. Queen Liz is a fan of Downton Abbey. 25 things we love about the Queen. Young Queen Liz was obsessed with the Loch Ness Monster. These are all real pieces and none of them matter a tiny bit, except maybe the last one because the fact we once had a head of state dumb enough to believe in the Loch Ness Monster is comedic gold. 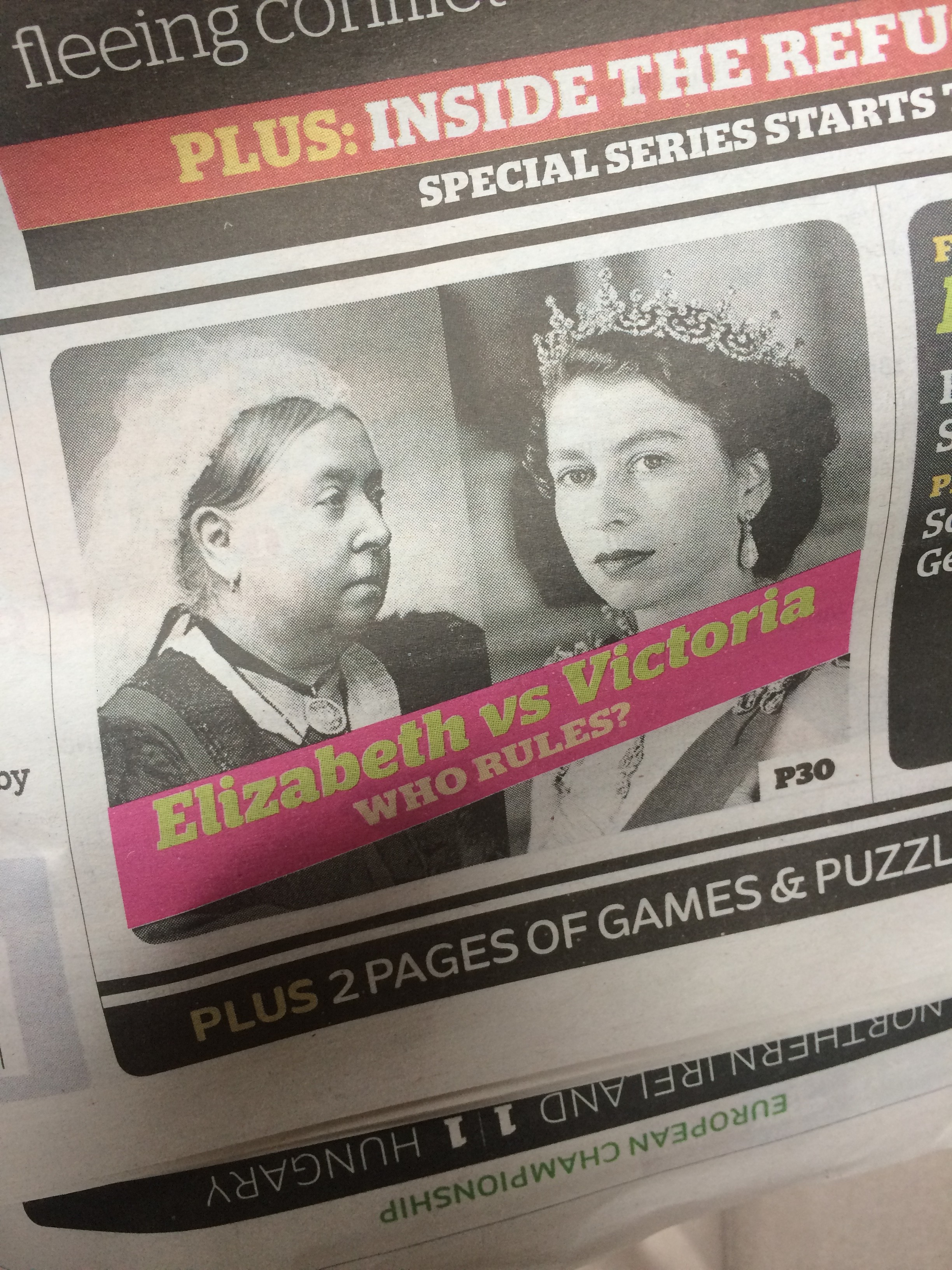 What’s scary is this celebration is detracting from real things which are important. A page on Liz means a story about refugees becomes a five line article nobody reads. It’s an awful truth that if more harrowing pictures of refugees surface on the same day as the Queen becomes the longest reigning monarch, they will become secondary news. Maybe even further back than that, because what is a dead Syrian compared to a Royal family tree and a gushing tribute from a palace insider. Is that fair? I don’t think so.

Celebrate the Queen not dying if you want. I’ve not met her, but I’m sure she’s nice enough. But it’s worth wondering what stories have been pushed back to bring her forward. What human suffering has been considered secondary to her managing to live one more day.

It shouldn’t be a controversial thing to say I care more about the plight of refugees than I do about the Queen. Some old rich woman living longer than another old rich woman is not a news story. Don’t let it distract you from the real problems.