They’re at it again: Defend Education lot stage ANOTHER occupation

Defend Education have cancelled their summer holidays to protest at sanctions handed down three members.

What’s that on your news feed? It looks like Brum students standing defiantly with banners and loudspeakers.

Didn’t something like this happen earlier in the year? Didn’t you step awkwardly over a few chalked slogans on pavements?

Yupp – they’re back. The Defend Education group are this time occupying the Strathcona Building in protest of the suspension of Simon Furse and Kelly Rogers who were, ironically, suspended for their part in an Occupation in November. 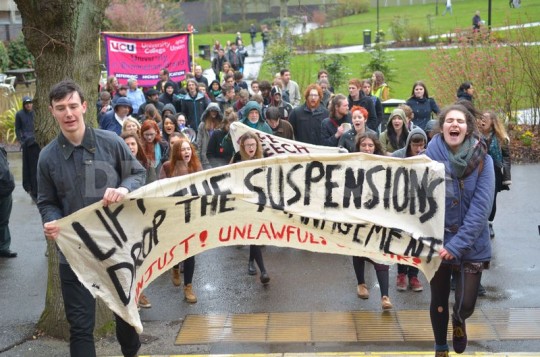 The wider issues of the Defend Education group have played in the background during our exams and have threaded through the beginnings of summer, but the consequences of the protests are still being felt in more ways severe than just a slight blockage of your newsfeed.

After the excitement of a few months ago, some would be forgiven for thinking “this old thing again?”

But perseverance has worked for Defend Education before, with cleaning staff being paid a living wage after demonstrations of a similar nature. 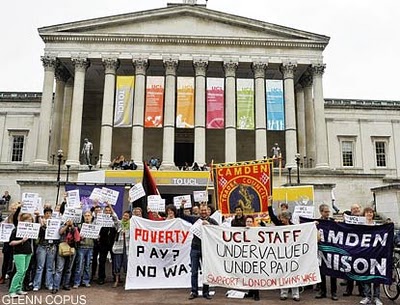 This time Simon Furse and Kelly Rogers have been handed down a suspension by the University of Birmingham.

What are they stirring now? Weren’t they cleared? Well it turns out they were, for the smoke-bomb-throwing-landmark-spraying demonstration in January.

Now they’re in heat for their actions during the comparatively benign November occupation of the Senate Chamber, which admittedly did last for about 8 days.

Hattie Craig, former sabbatical officer for education, was handed a “onerous and inhibitive restrictions” in the form of a suspended sentence for the same thing.

A press release from Defend Education today attacks these restrictions and more broadly demands the University to follow its own Code of Practise regarding the “long and lustrous history” of free speech and tighten up its disciplinary procedure.

I’m sure this just for the record but….I guess that demand could come in useful later. 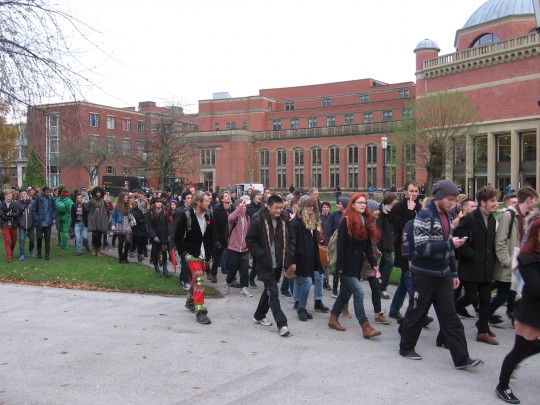 The march on the senate building, fond memories.

The court case (yes there was a court case) for this incident was thrown out, but this suspension is as a result of the University’s own internal disciplinary process, a process which has taken enough time for the impact of Defend Education’s protests to be sidelined.

The core debate lies between the established right of lawful protest available to all students, and the University’s urge to punish the causing of disruption to students and staff for eight days.

There’s something to chew on for critics on both sides of the political spectrum.

Kelly Rogers and Simon Furse were most likely identified out of those roughly 200 present from having a role in organising..wait, Simon wasn’t there? Oh, that changes things. Maybe someone should let the panel know…hang on, the panel admitted Simon wasn’t present? Well that does seem odd.

Even believing the train of thought taken in finding the trio culpable, it is unlikley that this is the end.

One protestor quoted in Defend Education’s statement has stated “we have to act before this becomes the norm not just in Birmingham, but nationwide.”

Alarmist maybe, but something that stirs the fires of students with a particular interest in individual freedoms. 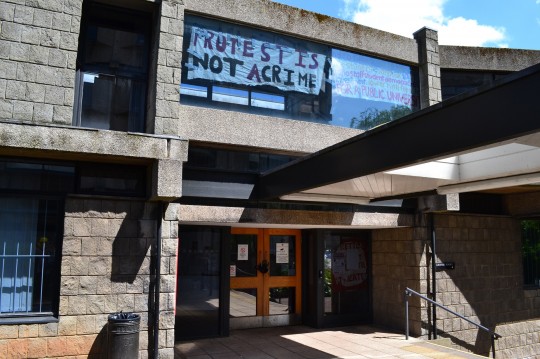 No typos this time.

Defend Education has retained a large support base and the backing of many academics and 13 MPs in previous actions- enough to make even an armchair cynic (not me…well maybe me) wake up and take notice.

Rachel O’Brien has added some Guild cloud, coming out in support of Defend Education on her blog.

This particular occupation, occurring in the summer holidays, may not get the same student attendance as previous protests but could make up for this by encroaching on the academic use of the university for research and conferences.