With five men’s hockey stars taking part in the U21 World Championships in Delhi right now, we thought it was time to give some of Brum’s sporting finest the appreciation they deserve…

UoB is really good at sport. Perhaps it’s no surprise then, that such a large number of international competitors hail from the hallowed halls of the Munrow. With five men’s hockey stars currently whacking sticks with the best at the U21 World Championships in Delhi, we thought it was time to give a select few the appreciation they truly deserve… 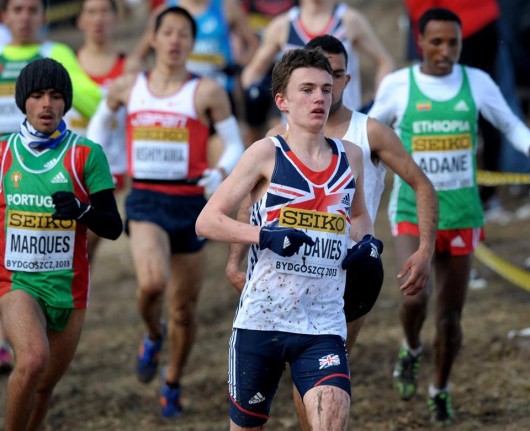 Jonny getting down and dirty for Team GB, in a city surely named by a student falling asleep during an all-nighter essay challenge

When and why did you take up Cross Country?
I started running in 2009 after doing well in some school races. My friend was already a member and he recommended the club (Reading AC). My granddad was the first to take me down to the club. Initially I only turned up every few weeks as I was a football fanatic and the timings clashed. As I got a taste for it I started to turn up more often. I kept playing football for some time but eventually stopped as I took running more seriously.

What’s the highlight of your career so far?
Highlight of my running career is probably winning bronze at the European Junior Cross Country Championships over 5000m in Rieti, Italy this year (on the track). Hard call to make though, as other achievements felt equally special and important at the time. My first English schools title sticks out as well, as the first time I represented my country.

Where do you see yourself in a few years?
In a few years’ time I hope to be representing GB at a senior level regularly. 2016 Olympics is a definite goal, as is the 2017 World Championships in London. I would love to be able to compete with the east Africans!

And finally… what’s been your best social so far?
The first sports night I went to was definitely the best night I have had, as I was meeting so many new people. We spend a lot of time training so it’s good to get on well with everyone! 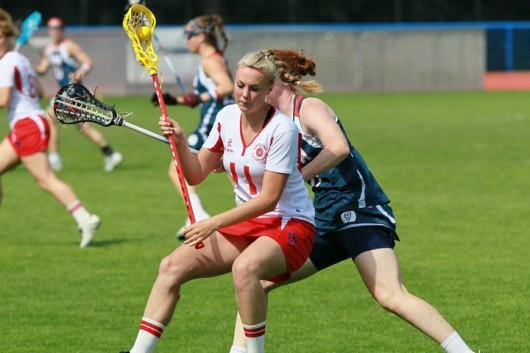 Hollie showing her skills for England

When and why did you take up Lacrosse?
I took up lacrosse when I was 12 at secondary school. I didn’t want to play (I was a runner) but the school gave me no choice… I’m glad they didn’t!

What’s the highlight of your career so far?
The highlight of my career so far is representing England at the World Cup in Germany. Although we lost out on the bronze medal it was such an amazing feeling being there and singing the national anthem with friends and family watching.

Where do you see yourself in a few years?
In 4 years the World Cup comes to England (Surrey Sports Park), so fingers crossed I’d like to see myself playing on home turf representing England. As well as that, I’d like to be teaching PE in an inner-city school!

And finally… what’s been your best social and why?
Best social is always the Christmas one! Especially as we seem to have big matches on the last guild night of term (last year Durham, home, league decider). Everyone from the club comes out and makes a real effort for the last one of the term, and the fancy dress is always a winner! This year we’re going to Laserquest against the Mens 1sts before heading onto Fab! 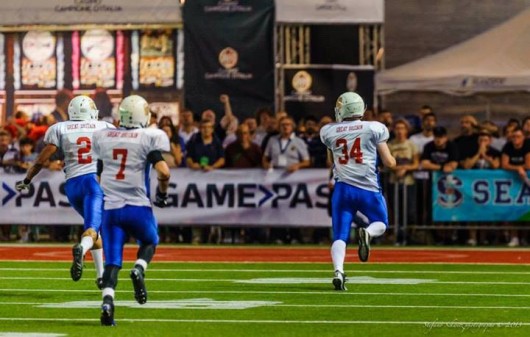 Our man Sam (#34), grabbing a touchdown in the European Championships

When and why did you take up American Football?
I took up American Football about five years ago, when I joined the Farnham Knights youth team. It was my best friend at school that got me into it; he had played for a few years and persuaded me to come watch a few games. I thought it was pretty awesome, ended up going to a training session and have been hooked since.

What’s the highlight of your career so far?
Highlights of my career so far include getting an interception returned for a touchdown for Great Britain against Italy in the European Group B Championships in Milan over the summer. It was such an incredible feeling to score for your country, especially against the host team, in a real stadium in front of actual fans.

Where do you see yourself in a few years?
In a few years I would really like to be playing professionally in Europe. Obviously not going to be making huge amounts of money, but enough to live and enjoy the new surroundings. Having seen some good friends and team mates do this over the summer, it has opened my eyes to the possibilities that American Football can open for me. And failing that I’m currently coaching, which is something I really enjoy and would love to continue to improve upon.

And finally… what’s been your best social and why?
Best social would have to be post xpLosION fab this year. It was great to see the whole team out and a lot of the old boys coming back to enjoy the victory with us. It was especially entertaining to see the GB head coach and my positional coach enjoy the pleasures that Fab offers.

And if you don’t think this lot are impressive wait for Part 2, coming soon on The Tab