If you thought the UoB sports video was intense then I have news for you: this play is so much more. Sure the UoB sports video looks like it was made by coked up rugby players. And I wouldn’t have been surprised if it was only time limitations and budget concerns that stopped that video featuring super-powered laser sharks flying a missile made of muscles and anger into a pit of lava in the shape of the word awesome.

BUT THIS FUCKING PLAY, MAN.

This play makes the sports video look like Stephen Fry narrating a cucumber sandwich. Of course, the fact it is a horror play set in a dystopian London with the main character Elliot (Calum Witney) dealing butterflies (which are drugs) in between hacking people in pieces. 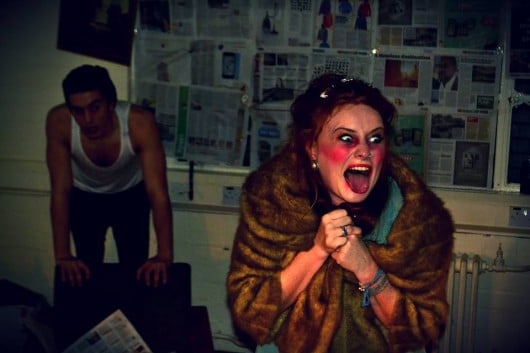 The story follows the adventures of Elliot and his not even half wit brother Darren (Ben Firth); AKA the love child of Holly from Geordie Shore and Wayne Rooney from the zoo. To be fair to Darren you do find out he was hit in the head with a hammer as a child. Still, Darren seems less intelligent than a rusted nail. And they get hit with hammers all the time.

Elliot and Darren are busy preparing a flat for a party when Naz (Alice Hodgson) shows up. Naz is a frequent customer of Elliot’s and lives down the corridor from the flat. Desperate to help, in return for butterflies of course, she quickly forces herself into the group.

As the play progresses other characters rock up including Lola (Elliot’s girlfriend – David Williams), Spinx (Lola’s brother – Danny Hetherington) and The Duchess (Elliot and Darren’s mother, but you aren’t supposed to know that yet so shut up – Daisy Tudor) and The Party Piece (a drugged up unconscious man – Tom McCann). 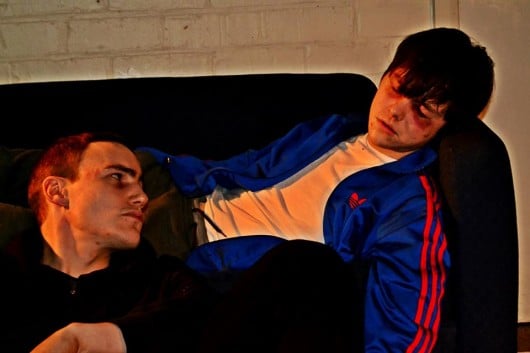 It quickly becomes apparent that the parties these people run are more like snuff films, where clients pay to live out violent fantasies of murder. This one is particularly important because London is about to be leveled by bombs and napalm and the client (Jack Fairley) has agreed to show them a safe location as payment. But as the client shows up the Party Piece ODs before the show. This leads to a last second decision to grab Naz and use her instead.

But an even later decision not to kill Naz means the client gets shot and the characters are left in the middle of the Blitz in London. 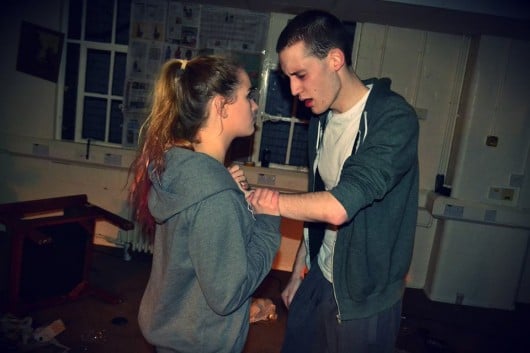 Sound intense enough for you? Well factor in that the script was seemingly written by a man surveying attitudes to David Cameron because every other line is “Fucking asshole”.

The acting was pretty full on too. All the cast played their parts perfectly, (to the extent that I wondered if the actor playing Darren was an exchange student from BCU). I don’t think a single mistake was made. Well, actually Lola said she’d beep the car horn three times to signal her arrival but it only went twice. But I’m a dick just for noticing that. Apart from that, everything was done to make the play super realistic. 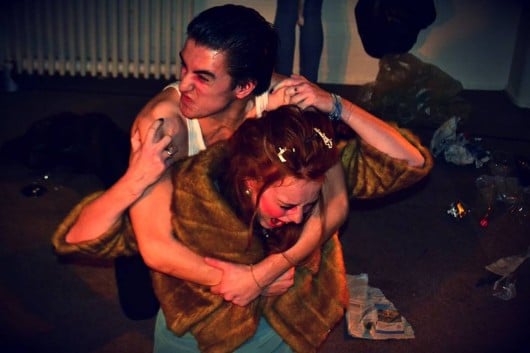 I’m giving the script of the play 3 stars and the acting 5 stars, which averages into 4 stars. This play is very much recommended. Unless, you’re easily offended. Which if you’re reading my articles, you aren’t.

‘Mercury Fur’ was performed in the Basement Rehearsal Room, Guild of Students from 30th November-2nd December.