The Tab plays: “Would You Rather?”

We decided to cause chaos around Selly Oak, posing the all-time controversial questions disguised as the famous game, “Would you rather?”

Some of you panicked, others readily gave a well informed answer (suggesting long hours of previous consideration), whilst a few refused to even answer at all…

The Tab trekked round Selly Oak to ask you the toughest Brum-based questions we could think of. 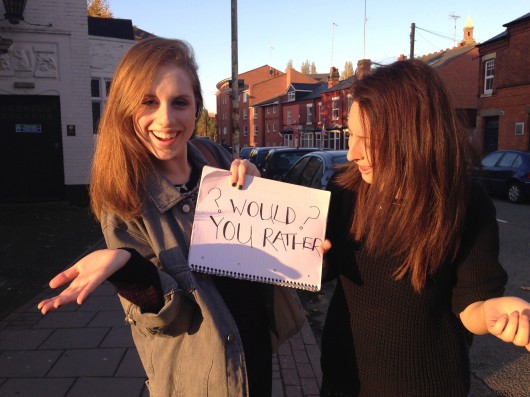 Would you rather have a Roosters for every meal, every day, for the rest of your life, or dress as the Roosters mascot chicken forever?

ANSWER: “Eat the chicken. Dressing as a Rooster would mean you’d look like a cock.” (Good one, anonymous interviewee.) 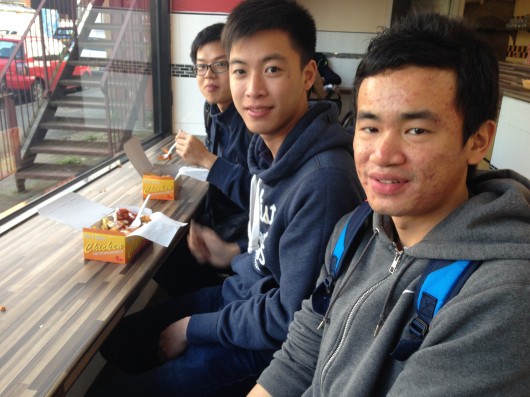 The lads who lunch

Would you rather go to Fab completely naked, or single-handedly clean up after Fab?

The idea of a night in the nuddy was neither Fab nor Fresh for 90% of our questionees. 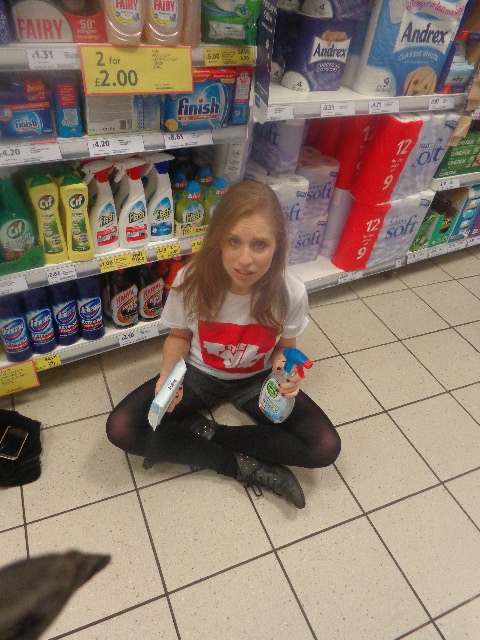 Too much Fresh, not enough Fab

Turns out Domino Dave is not quite the BNOC we thought he was…on posing the dilemma we found that every one of our participants required photographic evidence to prove the existence of this pizza-lovin’ lad. 80% of people decided to avoid Tetris Tim, based purely on his extended university experience.

ANSWER: “I’ve never met any of these three people in my life. I can’t remember. Dave…I reckon he’s quite dishy. Maybe I’d shag him.”  (On hearing that Tetris Tim spent 11 years at unay) “I reckon he’s a bit of a dope then. Yeah, so I’d avoid him. I’d marry Poppy and shag Dave. I think Poppy is just great.” 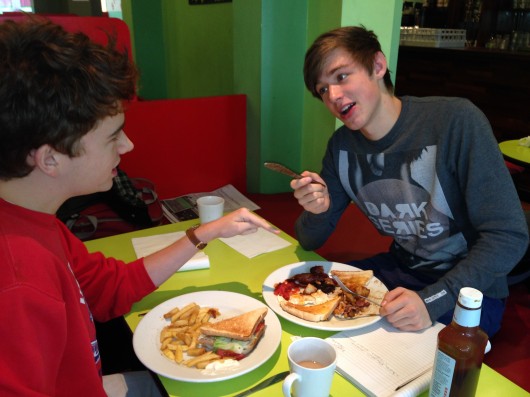 The Selly Sausage…perfect setting for a heated debate

Would you rather live in the library for the rest of your life (you’re allowed to leave once a year for a day trip of your choice) or live life permanently in exam time?

65% of people were swayed by the fact that all expenses would be covered on said day-trip. #studentlyf. 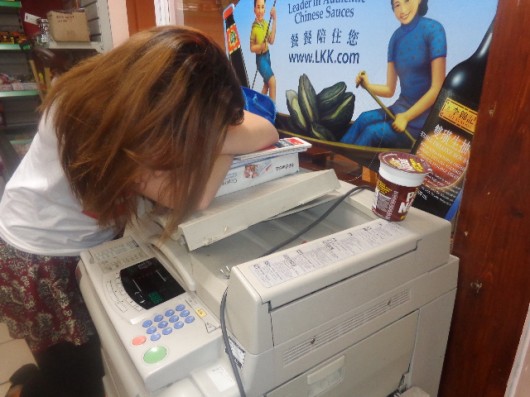 Tazza D: overcome with emotion at finding a printer in Costcutter

Would you rather get with the Drinks to Go man or the Vodbull moose?

For 70% of our participants, those Vimto lollipops just weren’t enough…fear not, Chris, we still love you!

ANSWER: “It’s a case of done both, isn’t it.  The Drinks 2 Go man’s a very good friend of ours. And I can’t imagine him being a very gentle lover. Whereas the Moose…I’ve been inside the Moose, I’ve worn the Mooses’ head before. We’re gonna have to go with the Moose. And I do like the furry so…that’s a united decision.” 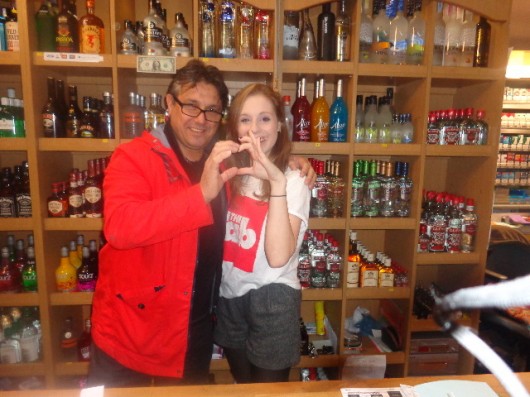 Everybody in love, come put yo hands up

Would you rather abseil down the clock tower or swim the Vale lake (lengths, not widths) to get to every lecture?

A close call if there ever was one. 52% chose to swim the lake, refusing to get their Guy Hahow on…(A famous industrial abseiler…yeah, us neither.)

ANSWER: Abseil down the clock tower. Wait no, swim the lake. I’d get to scared I would fall down the tower and die” 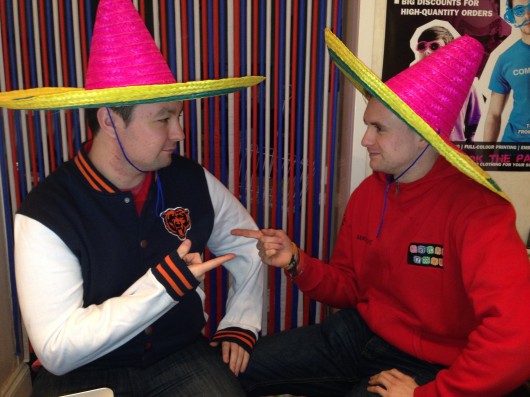 Caught red-handed…no naked Fab for YOU

Would you rather study Golf Management at UoB or Medicine at BCU?

This question sparked many a guffaw across the board. 95% of our participants opted for anything but BCU, deeming it a fate worse than death-by-Roosters.

ANSWER: “Golf management has to be shittest thing available, but Birmingham City’s even worse. Oh, I don’t know. I’d probably go Golf Management…do you know what they earn when they graduate?! This is the thing, if I gave one solitary fuck about golf, I’d love it.” 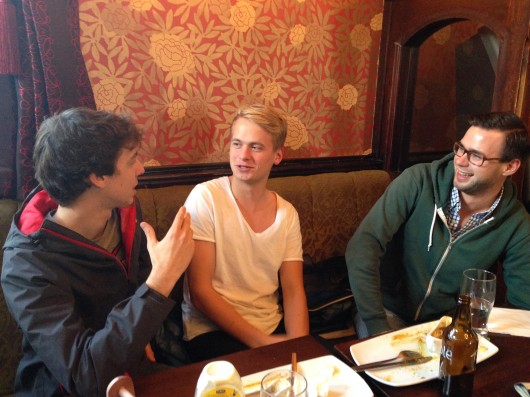 “Seriously, who told you low-rise tops were socially acceptable?”

Would you rather have a first date in Adam’s Place or Chick Inn?

Let the chick…see the inn! 60% of our players saw the latter as the perfect place to begin that fairytale romance. 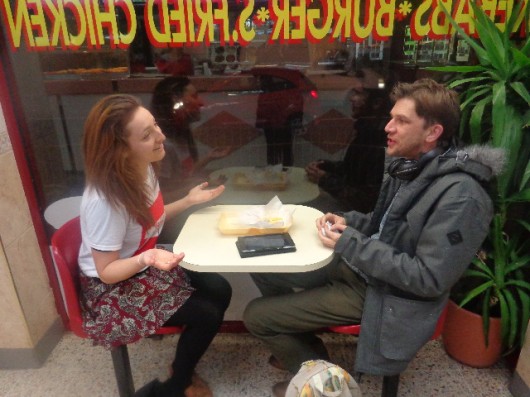 Thanks to all our participants. For those who think they escaped us, don’t worry, we’ll be back…