BNOC of the Year: The Results

The winner of BNOC of the Year is here

He may not have won the Guild elections, missing out on becoming Guild President for 2013/14, but he’s only gone and won the most prestigious prize there is…

That’s right, you voted Tetris Tim (Tim Lucas) as your BNOC of the Year! 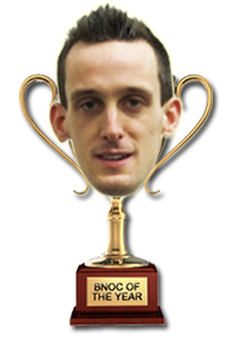 So don’t worry Tim, being able to officially add ‘BNOC’ to your CV will boost your credentials so much more than ‘President of the Guild’. Snore!

We caught up with the campus hero himself who said: “I’m a bit embarrassed, I’m probably never going to hear the end of this.

“Serves me right for winding up some of the other people who were nominated. Though I guess it’s nice to finally win something, definitely something to go on my CV! Who needs a PhD after this?”

It was uncomfortably tight at the top yesterday with only one vote in it between Tetris Tim and his rival, Rugby bad-boi Sam Markey, but Tim pulled through with 31% of the final votes.

Tim won’t be doing any more degrees after this year, and told The Tab “I’m really excited about finally leaving!”

Tim’s words of wisdom to any aspiring BNOCs out there is to “get someone to follow you around 24/7 with a big sign pointing to you.”

Commiserations to all the other BNOCs and BNOTs- there’s always next year!

This is how to get over your ex at university